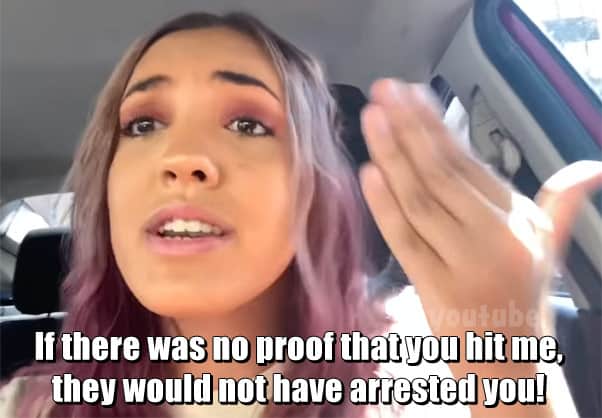 Fans of TLC’s teen parent reality series Unexpected have long suspected that the relationship between former couple Chloe Mendoza and Max Schenzel was a lot less pleasant than what viewers saw on screen and what their followers saw on social media. After the two got into an acrimonious back and forth on social media this week, Chloe decided to finally spill all the beans on just how unpleasant the relationship was (including allegations of constant abuse) with a tell all video posted to YouTube earlier today.

In the video (included below), Chloe is clearly quite emotional and worked up as she opens up about numerous occasions when Max was allegedly violent towards her, including the two incidents that resulted in his domestic assault arrests in December and February. Chloe reveals that she hoped to be able to take her time and put together a well-organized video, but given Max’s recent statements about her and his claims to have never hit her, she wanted to get the truth out right away.

Early in the clip, Chloe emphasizes that the police will not arrest someone for domestic assault unless there is a visible injury to the alleged victim. She says the first time Max was booked she had a bump on her head from when he threw a phone at her. She says the second time Max was booked she had an injury on her hand after blocking something Max threw at her face. She described that injury as a “big ol’ bump, a big ol’ bruise.”

Chloe then jumps backward in time to an earlier instance of Max being physically abusive towards her, which was roughly two weeks after their daughter Ava was born. “The first ever restraining order that I got was because he slapped me,” Chloe reveals. “He wasn’t arrested for that, but the restraining order was granted because he admitted, ‘Yeah, I slapped her.'”

Prior to the slapping incident, Chloe says Max got mad, threw her phone and broke it. He also allegedly punched her on the arm and kicked her leg on the same day.

Chloe shared this photo of the bruise on her leg: 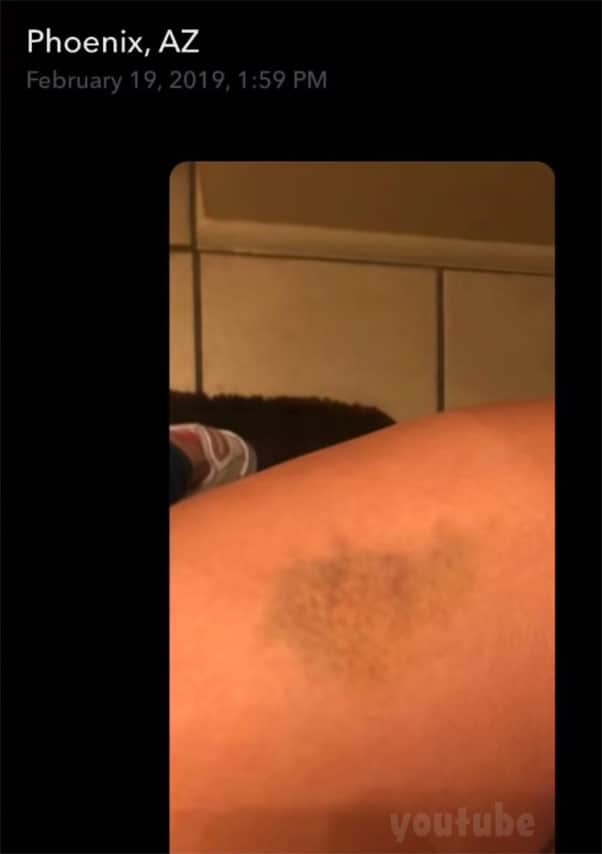 She says she had more photos of more bruises from other altercations, but Max would make her delete them.

Chloe adds that Max slapped her again and gave her a busted lip on her birthday last year. “The thought that was going through my head was, ‘Oh my god! How am I going to hide this from my family?'” she confesses.

#Unexpected Chloe Mendoza's boyfriend Max Schenzel was arrested for assault with injury again on Thursday. Plus, we have additional information about his December assault arrest after hitting Chloe in the face with a phone. https://t.co/5hKJeDioyn

In regards to the shattered glass door that Max posted a photo of, Chloe says that is true. “Yes, I’ll admit it. I did break his sliding glass door. It was my birthday and I was taking a nap, and he — Ava was not there, Ava was with my grandparents — while I was taking a nap, he took my car to go buy drugs with his friend Jacob. He took my car and I woke up and was, like, ‘Where are you? Where’s my car? I have to have dinner with my grandparents.'” Chloe says she had to lie to her grandparents about why she was running late.

“I was so furious!” she continues. “I picked up one of Ava’s toys and I threw it at the ground and it bounced on the carpet — it was a drumstick — it bounced, hit the carpet, and hit the sliding glass door. I was, like, ‘Great!’ AND I PAID FOR IT.”

Chloe reveals that Max also caused a lot of property damage, including a punched door and a stove. She says Max once threw a dining chair at the wall and put a hole in it.

Chloe describes another terrifying moment after the couple had to return home from a planned pool outing due to rain. She says that she was driving and Max, who had been drinking, grabbed the steering wheel and caused the car to cross over into the oncoming lane. “Luckily there was no cars,” Chloe says.

After the steering wheel incident, Chloe says she was crying and ran into the house. She told Max she was going to call her mom and go home, at which point he took her phone and “literally broke it in half.”

More legal troubles for #Unexpected dad Max Schenzel as he was charged with domestic assault on Dec 30. While dealing with that charge, Max was served with a warrant stemming from a 2018 DUI arrest that we were previously unaware of. https://t.co/L2caU3si8d

At this point in the video, Chloe reveals that she reached out to her Unexpected co-star Rilah Ferrer after it was reported online that her ex Anthony Vanelli had been abusive towards her. She shares a screen cap of part of their conversation: 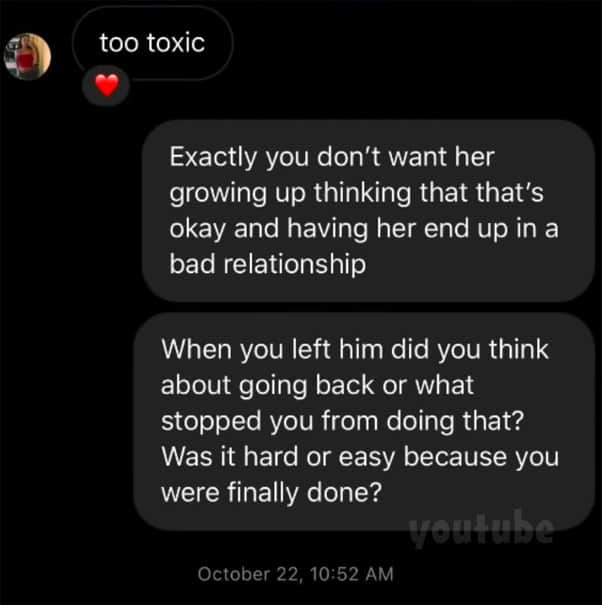 Adding insult to injury (literally), Chloe says that after she got $500 cash back from posting Max’s bail, he took $300 of it out of her purse while she was asleep. (Stealing from sleeping women appears to be an M.O. for Max.) She also says that she lost $700 in bail money because of Max’s aversion to showing up for his court dates.

Here is the full video:

Max has yet to respond to Chloe’s clip. He’s been pretty quick to clap back in his Instagram story statements lately, so I’m wondering if he is putting together his own YouTube video. He’s been teasing additional YouTube videos for a while, but he still just has the one question and answer video from February on his channel. In case you missed that video, here’s our full recap.

Essentially, Max insists that he’s a “good guy” who doesn’t “belong in jail,” and all these arrests and abuse allegations are either a big misunderstanding or because of drugs. He calls out Starcasm by name and blames us for Chloe’s parents not liking him, even though they obviously disliked him when they started filming for the show — well before we even knew who he was.

Less than a week after posting the video, Max was arrested again for allegedly assaulting an officer and stealing at least one vehicle.

Facts… Chloe tells her story I tell mine but you guys just love the drama and some of you can see through her manipulation but some of you woman that actually have been abused which is terrible and that’s why Chloe is evil, because I started telling people the crazy things she’s done the only thing she has against me is my addiction which I’ve been sober from for a long time! Keep in mind she drinks and does other stuff which is none of my business but if you want to compare me to Chloe she’s a great mom but immature and loves drama and to lie to make herself look better! I’m sick and tired of hearing people call me abusive just because she says I did something does not mean it’s true! I love Ava to death and would never lay a hand on my daughter.

For all your lies and manipulation, karma is a b**** and will get you back tenfold … keep taking about me honey! Ava will know the truth when she’s ready! All I gotta worry about is being a great father so for all of you people messaging me or commenting I appreciate the support! And for those of you believing her toxic lies I feel bad for you because you probably did get abused and that’s terrible, but that’s not me. My dad raised me right.

Almost all of what she said is a complete lie. I don’t go posting the stuff she did but because she likes attention she’ll make up lies and say I did all these terrible things that I would never do. Honestly I don’t care what people think. If you know me personally you know I’m a good person and treat everyone with respect. Yes I’ve made plenty of mistakes throughout the days I was using but none of those were physically abusing my loved ones. We both played our part in our toxic relationship, but posting these lies about me DOESNT make anything BETTER it actually makes things Worse but what I think or do doesn’t matter because she has “proof”. I didn’t screenshot our messages or keep proof of stuff or post videos because I’m not going to talk badly on my daughters mother’s behalf. I’m better than that. I know where I came from and hitting a woman or abusing your daughter is the devils work.