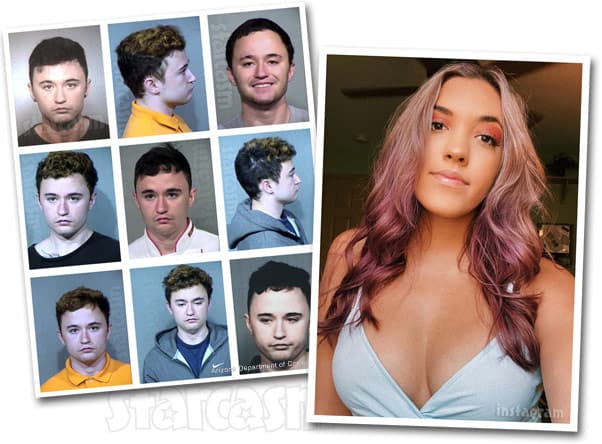 Former Unexpected couple Chloe Mendoza and Max Schenzel had a major falling out roughly six months ago, soon after Max’s second arrest for domestic assault in less than two months. Since that time, Chloe has taken out an order of protection against Max, but that hasn’t stopped them from going at each other on social media.

The two have actually remained fairly civil online up until last month. Chloe recently revealed that she has a new boyfriend, which seems to have been a bit of a catalyst for the public animosity. She also apparently made some posts with accusations about Max, but I couldn’t find what she stated or on what platform she said it.

We will pick up the latest back and forth with a post made by Max referencing the allegations by Chloe, as well as the fact that he has been unable to see their daughter Ava. Here is Max’s statement, in all caps just as his Instagram story post was:

KEEPING ME FROM MY DAUGHTER AND MAKING UP STORIES ABOUT ME IS ABOUT THE MOST IMMATURE THING YOU CAN POSSIBLY DO. I’VE BEEN SOBER FOR 6 MONTHS, YOU HAVE BEEN DRINKING AND SMOKING WEED, AND YOU LIVE WITH YOUR PARENTS STILL. YOU GOT A NEW BOYFRIEND SO WHY KEEP ME FROM MY DAUGHTER WHEN I’M DOING BETTER THAN YOU? YOU JUST LIKE HAVING CONTROL. IT’S OKAY WELL SEE WHAT THE JUDGE HAS TO SAY WHEN SHE SEES THE PROGRESS I’VE MADE TO BE IN MY DAUGHTERS LIFE AND THE PROGRESS YOU’VE MADE 😂👌

Instagram’s @TLCUnexpected DMed Chloe to see if she was aware of Max’s post, and that sparked this conversation:

@TLCU: Are you aware of what max posted?

CHLOE: Yeah it’s dumb. I swear I live rent free in his mind.

CHLOE: Also he has not been sober for 6 months he did drugs May 8th, so nothing he says matters to me bc it’s all lies.

@TLCU: Yeah I’ve noticed that. I just wanted to get your thoughts on what he posted.

CHLOE: He honestly just saw I moved on and decided to throw a tantrum with lies on Instagram.

@TLCU: Yeah seriously. 😂 The restraining order is still against Max due to him laying his hands on Ava and you right?

CHLOE: Yeah! He had 2 weeks to try and fight it and get visitation set up then but didn’t and that’s not my fault he chose not to when he had the chance.

@TLCU: Exactly!! When was the last time he saw Ava?

CHLOE: When he kicked her down so likeee 6 months.

CHLOE: I honestly don’t even care at this point he can say whatever he wants about me all it’s doing is showing how immature he is.

#Unexpected dad Max Schenzel has managed to avoid getting into any more legal trouble over the past few months, but the 21-year-old now has a warrant out on him after he skipped a scheduled court date earlier this week in regards to his assault cases. https://t.co/i9yiM1kvXe

Someone came to the defense of Max in the comments section, and the topic of his domestic assault arrest(s) came up. The commenter demanded proof of the allegations against Max, at which point Chloe’s mom Jessica entered the chat. “The proof is Chloe said it happened and the police were called,” Jessica replied. “Enablers like you always blaming the victim… Where is the proof, the proof is that CPS had to get involved.”

Jessica went on to reveal that Max allegedly broke Ava’s crib and smashed a TV in front of her. “No we aren’t putting all of the reports out there because who gives a sh*t who believes us. I know my grand baby was scared and hurt and had her crib broken and TVs smashed in front of her. If you want proof call and get your own copies of the police reports from Tempe Police.”

Max’s sobriety was the next topic that Jessica tackled. “And another thing, you are so quick to question Chloë, but where is the proof Max is sober. I’ll tell you we have screenshots of texts and messages he sent Chloë in May and he is all kinds of messed up. Who knows what he is on. But nobody questions that right?”

COMMENT: See, I just asked for proof further than him throwing the phone. You guys were sh*tty to max before any of that even happened. He’s trying & you can’t knock someone for trying ma’am.

JESSICA: So you know him personally? How do you know he is trying? The only thing he is trying, is to stay out of jail. We’ll see what happens after his sentencing next month. Max has no remorse for his actions and thinks he did nothing wrong. That will be his first real step.

In case you missed it, Max has sentencing and disposition hearings this month for two cases other than his pending domestic assault charges. One is from his arrest in April after he allegedly resisted a police officer while attempting to steal at least one vehicle. The other hearing is in regards to his infamous theft case from 2018 when he stole a credit card, cash, and casino vouchers from his friend’s sleeping 77-year-old grandmother before heading to McDonald’s and an electronics store to buy fast food and a mini-fridge. That case is still active after Max’s antics over the past year and a half finally resulted in his probation being revoked in early February.

#Unexpected dad Max Schenzel catches another break as his 4 felony charges from an arrest last week have been dropped to just one. Plus, we have exclusive details from the incident from one of the arresting officers. Did he try to steal 2 cars?! https://t.co/SYW6jfCDXk pic.twitter.com/4oGmEUVPrQ

Max WAS NOT HAPPY about the mother/daughter tag team bashing, and he responded with a few lengthy statements via his Instagram stories in which he referred to Chloe as “Honey.” The 21-year-old also went after Jessica and demanded that she stay out of their business and “stop living in a teenage world.”

Here are his posts:

SO YOUR GUNNA POST SH*T ABOUT ME AND HAVE YOUR MOM GAIN [sic] UP ON ME? HONEY YOU DRINK AND SMOKE WEED AROUND OUR DAUGHTER, YOU HAVE BEEN DRINKING EVERY WEEKEND AND SMOKING WEED AND WHO KNOWS WHAT ELSE BUT I’M PRETTY SURE U CAN’T TALK OR MAKE UP LIES ABOUT OUR PAST WHEN YOUR DOING ALOT WORSE THAN ME. I LIVE ON MY OWN AND WORK AND DO EVERYTHING ON MY OWN. I NEVER ABUSED YOU OR ANYTHING THAT’S WHY U WROTE A LETTER TO THE JUDGE SAYING NOTHING HAPPENED AND THAT’S WHY IT GOT DROPPED…. AND I’VE BEEN SOBER FROM EVERYTHING FOR A LONG TIME COMPARED TO YOU. YOU ALSO DRINK WITH YOUR MOM AND YOUR NOT EVEN 21, SO IF YOU WANT TO BRING YOUR MOM INTO THIS I CAN JUST THROW HER UNDER THE BUS SINCE YOU WANT TO PUT ME ON BLAST FOR STUFF I DIDN’T EVEN DO???

GET A LIFE JESSICA YOUR NOT CHLOES AGE STOP LIVING IN A TEENAGE WORLD. YOU LOVED BEING ON THE SHOW BECAUSE YOU LOVE DRAMA AND NOW THAT I’M NOT WITH YOUR DAUGHTER ANYMORE I DON’T HAVE TO PUT UP WITH YOUR SH*T. YET SOMEHOW YOU STILL TALK SH*T ABOUT ME WHEN YOU DON’T EVEN KNOW HALF OF THE PROGRESS I’VE MADE BECAUSE Y’ALL JUST BELIEVE THE LIES SOCIAL MEDIA’S POSTS. THEY POST LIES TO GET VIEWERS AND CHLOE LIES TO ACT ALL PERFECT WHEN SHE WAS NOT SOBER AROUND OUR DAUGHTER ACTING LIKE I’M THE BAD GUY WHEN I’M THE ONLY ONE PUTTING EFFORT INTO BETTERING MYSELF.

#UNEXPECTED In a new YouTube Q&A, Max Schenzel insists "I don't belong in jail. I am a good guy." He also blames @Starcasm for Chloe's parents not liking him and says 99% of articles about him are not true. Watch the video, get a recap & read our response! https://t.co/NXIFHvjYO5 pic.twitter.com/EWe5eALomM

YOUR MOM DOESN’T EVEN KNOW YOU’VE BEEN MESSAGING ME AND VIOLATING THE ORDER THAT’S THE FUNNY PART. YOU ACT LIKE U HATE ME BUT THE ONLY REASON WE STOPPED TALKING IS BECAUSE I STARTED TALKING TO SOMEONE ELSE FORCING U TO MOVE ON. LIKE STOP POSTING STUFF ABOUT ME AND BE MATURE LIKE HOW HARD IS IT TO ACT YOUR AGE? NICE ONE, THE ONLY PERSON AND GOOD THING THAT CAME FROM BEING WITH YOU AND YOUR TOXIC FAMILY WAS AVA. NOW STOP BEING IMMATURE AND POSTING ABOUT ME. JESUS.

Max’s post inspired Chloe to share some receipts with @TLCUnexpected, including photos of the crib and television that Max allegedly damaged. Here’s the gallery of images, which also includes screen caps of Max’s pending domestic assault charges — for which he has an outstanding warrant due to a failure to appear in court last month:

Since Max wants to continue to lie and say he never broke TVs or Avas crib (swipe to see the damage he did) and Chloe sent me the domestic violence report she filed against Max. End of discussion

Max responded with his own receipts by posting a photo of a shattered sliding glass door that he says Chloe caused when she threw one of Ava’s toys into it while in a drunken rage. “MY GLASS DOOR FROM WHEN CHLOE THREW AVAS TOY AND SHATTERED IT,” Max wrote with the photo, before sharing it again and adding a lengthier caption: 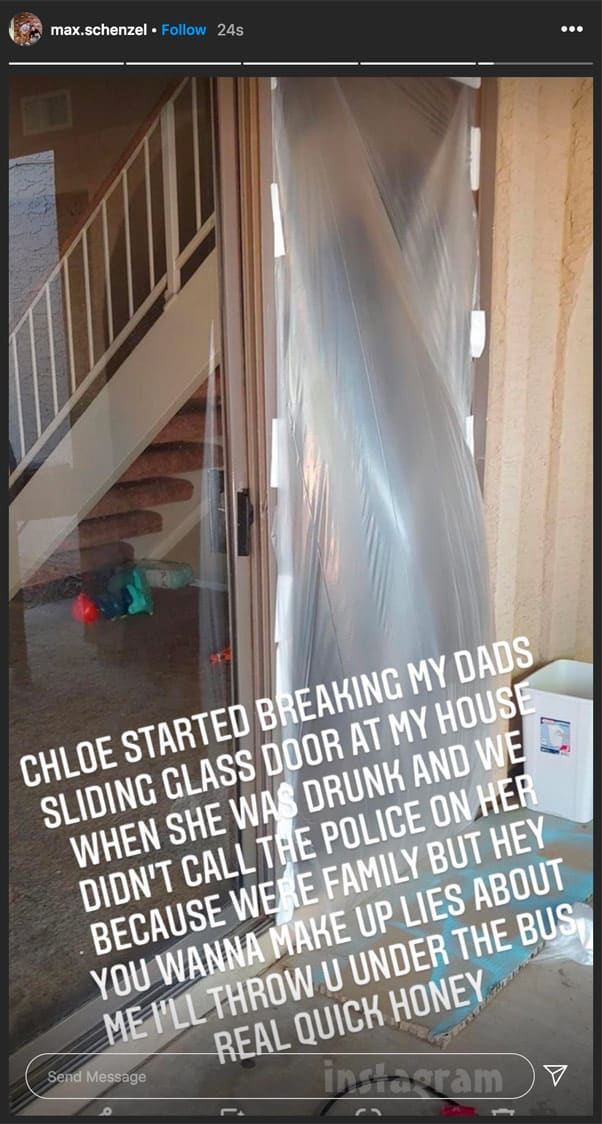 An exasperated Chloe responded to Max’s post in another DM exchange with @TLCUnexpected:

CHLOE: Omgggg he’s so aggravating. His new post is another lie! It was my birthday and he took my car to go buy drugs and I was angry bc I was supposed to be having lunch with my grandparents so I got mad and threw one of Ava’s toys and it accidentally broke his door. He’s acting like it’s the same when it’s not. Also I was not drunk.

CHLOE: He is driving me crazy.

The word co-parent doesn’t exist in your vocabulary. Why have a baby with someone if your just going to try and control everything? Keeping me from my daughter when I’ve been doing phenomenal is just hurting her everyday that goes by. As for those of you that believe those publicity posts of me being abusive I seriously am concerned for you because believing everything you see is not a good way to live. Just saying. I would never lay my hands on a woman especially someone I love, and especially my own baby girl. That’s disgusting that you people including Chloe would go say stuff like that about me just to start some drama because I don’t wanna be with her now that I see my full potential.

Chloe recently recorded an Unexpected update segment for TLC, and it is expected that she will reveal more details about her volatile relationship with Max and their break up. It’s still unclear when the catch up special will air. I was assuming that it would coincide with the premiere of Unexpected Season 4, but there are reliable reports online that the new season of Unexpected has been delayed — due in part to producers deciding to cut Hailey Tomlinson and Matthew Blevins after filming them for quite a while.

UPDATE – It seems we won’t have to wait until the catch up special because Chloe has published a tell all video on YouTube with details about numerous instances in which Max was allegedly violent towards her and their daughter Ava. Click the link to watch Chloe’s disturbing video, and get a full recap.