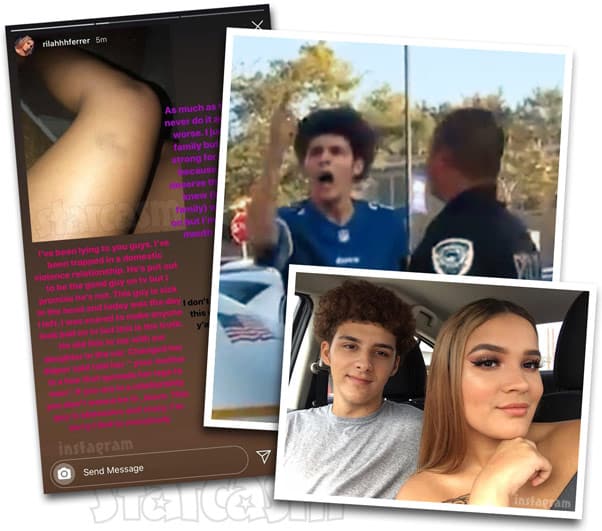 TLC’s teen pregnancy reality series Unexpected is living up to its name as mom Rilah Ferrer shocks viewers by claiming that she has been the victim of domestic violence at the hands of her daughter Malayah’s dad Anthony Vanelli. Rilah shared a photo of a large bruise on her leg and states that Anthony is not the “good guy” that he appears to be on the show. Rilah’s mother Rosa also lashed out at Anthony and posted a video of him yelling and giving the finger while being held back by police!

“I’ve been lying to you guys,” Rilah begins her Instagram story caption for the bruise photo. “I’ve been trapped in a domestic violence relationship. He’s put out to be the good guy on TV, but I promise he’s not. This guy is sick in the head and today was the day I left. I was scared to make anyone look bad on TV, but this is the truth.”

Rilah then explains the bruise. “He did this to me with our daughter in the car. Changed her diaper [and] told her: ‘Your mother is a hoe that spreads her legs to men.'” She then offers an apology for not being more open about the truth for the cameras. “This guy is obsessive and crazy. I’m sorry I lied to everybody.”

In addition to the bruise photo, Rilah also posted a series of videos in which Anthony can be heard explaining why he apparently took their daughter Malayah from Rilah. “I didn’t mean to take her away from you,” he says. “I just wanted to show you that I’m serious about this.”

“So you’re threatening me with my daughter?” Rilah asks. “Showing me that you can take her from me at any time?”

“Showing you that I can do that any — yes, that’s the truth,” Anthony replies.

Rilah summarized her situation in her text accompanying the bruise photo, and offers advice to others who may be in an abusive relationship:

If you are in a relationship you don’t wanna be in, leave…As much as they say “I’ll never do it again,” it’ll get worse. I just wanted a family but I have to be strong for my daughter because she doesn’t deserve this. No one ever knew (including my family) what was going on, but I’m not keeping my mouth shut any more.

Rilah’s mom Rosa also addresses Anthony’s alleged abuse of Rilah in her caption to a video clip showing Anthony yelling at her while being held back by police! Here is Rosa’s full caption:

This is the reality of things right here! This is what I have to deal with and still I was always the one to forgive and give excuses! I felt bad cuz I knew he had a bad upbringing and I always gave him a chance cuz I wanted to make a difference in his life! This is not the first time this happened, but NO MORE! My granddaughter is now involved these things are happening in front of her, my daughter is getting hit! I’m gonna stand up for mine, and do whatever it takes to keep them safe. FYI he’s not the angel you guys think he is

“You’re not the mother! Understand that!” Anthony yells repeatedly at Rosa. She replies by pointing out that Anthony lives in her house, which he denies. Rosa and Anthony are then yelling at the same time with her saying “I raised you!” and Anthony saying “You’re an embarrassing grandma!”

Anthony replies to Rosa by saying she didn’t raise him before repeatedly stating “Shut the f**k up!”

“You’re unstable!” Rosa replies as one of the officers on the scene encourages everyone to leave.

Rilah shared a clip from the video in her Instagram story and provided some additional context. “He took my daughter and told me if I left him he’ll make sure I never see her again. He’s mentally unstable. This is the real Anthony. No self control.” Rilah also mentioned in her Instagram stories that “charges were pressed” against Anthony.

I checked court records and couldn’t find a case yet. I will continue to check and update if I find more information.

It’s clear from the Rosa’s police video that Anthony is definitely not the always quiet and reserved guy that we see on the show. If the allegations are true, then kudos to Rilah for taking the steps to get out of the relationship and distance herself and her daughter from an abusive situation.

#UNEXPECTED Anthony needs to stop taking advice from his mother Rebecca's boyfriend Markos because Markos is currently in jail in Florida for murder! Get all the details on the terrifying home invasion allegedly orchestrated by Markos earlier this year. https://t.co/BdNytzIU79

The accusations against Anthony come just two months after his mother Rebecca’s boyfriend Markos was arrested and charged with second degree murder. Markos is currently being held without bond as he awaits trial.

UNEXPECTED Are Emiley and Diego back together?

VIDEO Chloe is leaving Unexpected, will not be back for Season 4