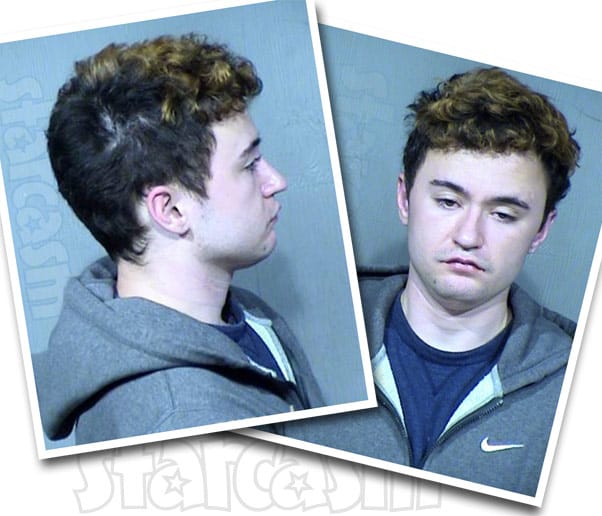 As we previously reported, Unexpected dad Max Schenzel was arrested again last week in Arizona and charged with four felonies, including theft and aggravated assault on a police officer. We now have an update on his court case, as well as details about the incident from the arresting officers.

Max is no stranger to catching a break in regards to his steady stream of legal issues, and it appears that he has caught a huge one in regards to this arrest. Max’s original charges were aggravated assault on an officer, resisting arrest, unlawful use of means of transportation, and theft. According to court records, prosecutors decided to officially file only one of those: unlawful use of means of transportation. In other words, auto theft.

The remaining charge is a class 5 felony, which has a presumptive sentence of 1.5 years in Arizona. (Source: PhillipsLaw.com) Max had a status conference scheduled for earlier today, and a preliminary hearing scheduled for later this week.

So what happened that resulted in Max being arrested for allegedly taking a vehicle? Actually, it may have been two vehicles!

The officer’s account of what happened is a bit hard to follow. Here is a full transcript of the first part of the narrative:

Subject was in Hyundai Tucson for a 2nd radio call which was stolen and found in front of the residence at a 0601 call. 2nd call was at 0724 hours and victim saw this subj in the car and exited and left east. As arrived on scene victim was talking in street. Victim pointed out subject as one in his vehicle and subject was walking away. Victim stated subject was in another vehicle from when he called till police on scene.

The address that the Hyundai Tucson was found at is on the same street as Max’s current address, according to the report. It’s unclear if the owner of the Hyundai lived somewhere else and tracked Max down, or if he lived on the same street and discovered Max in the vehicle when he returned. And it appears that Max got into another vehicle nearby that also wasn’t his?

The narrative is a little clearer after the excerpt above. Max was initially walking away when police first arrived, but reportedly began to jog soon after. When officers caught up to Max they told him that he was being detained, at which point Max “started to resist being handcuffed. While resisting he attempted to kick officer [NAME] in groin.”

The officer adds that Max’s resistance was evident enough that a garbage truck driver stopped and asked the officers if they needed assistance.

Once Max was finally handcuffed, officers searched him and found the keys to the stolen Hyundai, “which was recovered parked in front of his house earlier.” Max denied taking the vehicle and told the officers that someone must have placed the keys in his pocket. Max also left his phone charger in the stolen vehicle. “When shown to him, he stated it was his and recognized it because it was blue.”

The owner of the second vehicle did not want to press charges.

I want to clarify that the police report had a section asking: “Was the defendant under the influence of alcohol or drugs at the time of the offense?” to which the officer selected “No.”

Max revealed in a YouTube video last week that he recently got a new job. Perhaps he couldn’t find a ride to work and didn’t consider Uber or Lyft to be an option for some reason?

In addition to this arrest, Max is currently dealing with his probation being revoked, a domestic assault charge, and more. We will continue to monitor his current and future cases and continue to provide updates when anything major develops.