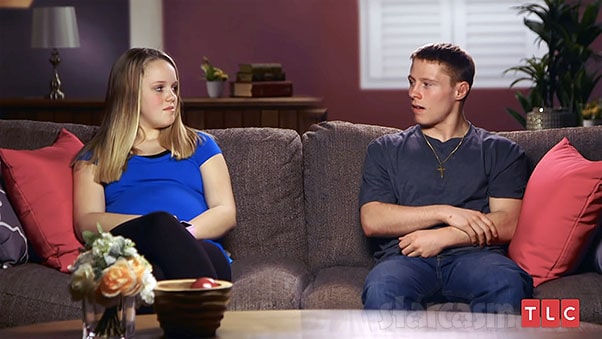 TLC’s teen pregnancy reality series Unexpected is living up to its title with some rather surprising casting news! Just as the network announced the current fourth season will be taking a one-month break, online sources are reporting that new couple Reanna Cline and Taron Ward are being cut from the show.

Rumors first began to swirl about Reanna and Taron’s departure after TLC released the first preview trailer for the second half of Season 4 and neither of them were featured. @tlc.unexpectedtea on Instagram followed up with the tea on their reported booting.

“We noticed Reanna missing from the most recent trailer we posted on the page and it turns out the reason we have to wait a month for the next episode is because Reanna and Taron have been kicked off the show and they need time to edit them out of the remainder of the season… Yikes,” the account revealed on Wednesday.

I checked the TLC website and noticed that Reanna and Taron’s Baby Bumps episode is no longer available, but all the other episodes for the other Season 4 couples are still there.

Reanna’s mom Jessica later confirmed her daughter’s departure from the show in a Facebook comment. “Thank you all for your support,” she began. “But no, Reanna will not be returning.”

It’s still unclear why Reanna and Taron will not be back. Many online are speculating that it has to do with Reanna violating her NDA by revealing that Taron was not present in the room when their baby was born. There is also speculation that a controversial video reportedly posted by Taron in which his daughter Dani could be seen playing with a retractable knife.

In my opinion, neither of those two things would be enough (separately or combined) to merit removing the couple from the show. Unexpected has seen much more significant NDA violations and leaked spoilers without removing cast members. And producers have also seen much worse from their parents over the first three seasons that letting a baby play with a retractable knife. My guess is that their removal wasn’t actually the decision of the producers or the network. It makes more sense that one of the parents or grandparents (Reanna is not yet 18) decided they no longer wanted to film — and that was that.

I believe that quitting mid-season would mean that the cast members would have to forfeit their payment for the first half, but I am not sure about that. That might seem like a big deal, but the cast members of Unexpected don’t get paid very much at all.

Perhaps the decision to stop filming was Taron’s? He has recently indicated on Instagram that he is fighting for 50/50 custody of their daughter. Perhaps one or both parents declined to film as part of the custody battle? That is purely speculation.

UPDATE – Reanna’s sister Jarea replied to our tweet about this story, but she didn’t provide many details. “We aren’t returning for personal reasons,” she wrote. “Before anyone comes up with their own ideas of why!”

UPDATE – Reanna’s co-star Myrka Cantu answered a couple questions about the casting news on Instagram. When asked why the show stopped airing for the month, Myrka seemed to confirm that producers needed time to edit. “Unfortunately, they are editing out a cast member and TLC needed that month to do so,” Myrka explained. She later stated that she thought she knew the reason that the cast member was no longer on the show, but she wasn’t 100% sure so she didn’t “want to put something out there and for it not to be true.”

UPDATE – Reanna’s mom Jessica shared some more information about their departure from the show, but unfortunately was not able to go into too much detail either:

🤦‍♀️ A personal conversation was had with one of our producers a few days before the “Tell All”….. The NETWORK Canceled our segment of filming for the “Tell All” the day before we were supposed to film. THAT’S WHY WE WEREN’T AT THE “TELL ALL”….. The NETWORK decided to stop airing Reanna and Taron’s story as well, after the conversation with the producer. Hence the reason for the month hiatus. NOBODY BROKE CONTRACT. We are still under contract with them just like everyone else….. Hopefully that’s clear enough for everyone. 😂😂

There are also rumors swirling that Reanna’s co-stars Tyra Boisseau and Alex Wilson may not be back. Tyra did an Instagram Live session on Monday in which she lashed out at producers for a litany of things, but mostly for how they continued to push the narratives they wanted to push, regardless of how true they were.

During the live stream she reportedly revealed that she makes $425 per episode. And remember, Tyra most likely makes more than all the rest of the Season 4 moms (except perhaps Lilly) due to the fact that she is the only one to return from Season 3. (Lilly was on Season 1 before returning this season.)

However, Tyra and Alex are both included in the preview trailer for the second half of Season 4 premiering in March. So, I am guessing that if Tyra has decided to no longer be on the show, that she still plans on finishing out this season.

The reported departure of Reanna and Taron comes during a season that has failed to maintain the show’s previous popularity. Unexpected Season 3 finished up averaging one-and-a-half million viewers an episode. After roughly a year off, Season 4 premiered with 978,000 tuning in. Unlike previous seasons, the ratings have remained flat as the show finished up January averaging right at one million viewers per episode.