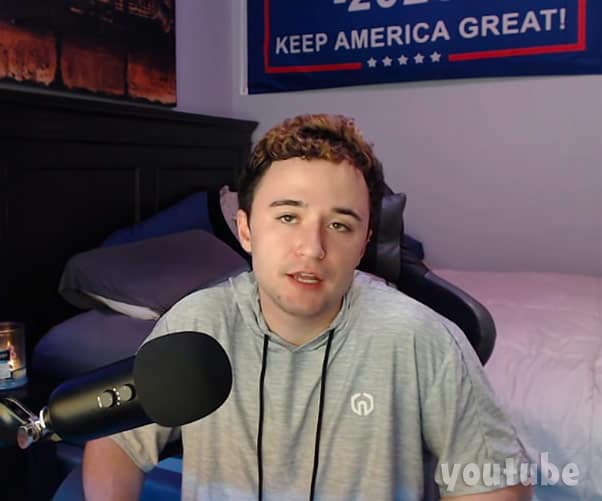 Unexpected dad Max Schenzel is tired of being painted a bad guy by Chloe Mendoza’s mom Jessica, the media, police, social media, the Arizona court system, Unexpected fans, his probation officer, and others. The 20-year-old reality star posted a YouTube video earlier this week answering fan questions and insisting that he is a “good guy” who doesn’t “belong in jail.”

Max mentions Starcasm by name and blames us for Chloe’s parents not liking him. He also claims that “99 percent of those articles you see about me online are 99 percent not true.” If you do the math, that means that roughly 98 percent of what is written about Max in online articles is not true.

I feel confident that Starcasm is the source for a majority of the information posted online about Max’s legal issues over the past couple years, and our reporting is based almost entirely on court records, police reports, and social media posts by Max and Chloe. However, Max did not mention any specific Starcasm articles that are not true. In contrast, some of what Max says in his video seems a little less than completely accurate.

I will start with a brief recap of the portion of Max’s Q&A that is pretty straight-forward. That will be followed by my response to some of his debatable claims. The video itself is embedded at the bottom of this post.

Max confirms that Chloe kicked him out of their apartment earlier this month. Right after getting the boot, he was staying with his dad in Phoenix, but he’s since moved in with a friend who lives closer to Chloe and daughter Ava in Tempe.

Max reveals that he got another new job in the Tempe area that started on February 23. He recorded the video prior to February 23, and he doesn’t share any specifics about what the job is. He has been posting videos on social media that seem to indicate it includes tile installation.

Chloe stated that Max was sober for almost five months before relapsing late last month. That’s when bad things started to happen again, eventually leading to her kicking him out. Max’s timeline seems to line up with Chloe’s as he talks about them living together for roughly six months before he “started messing up.”

Max says that staying out of trouble is just a matter of staying away from his old friends. “I’m a good father to the point where I’m not hanging around the wrong people getting high,” he says. “The only time I mess up or do drugs or break the law is when I’m around my old friends that break the law.”

#Unexpected dad Max Schenzel was arrested early Thursday for an assault-related charge & later that day Chloe Mendoza shared a YouTube video with updates on her personal life, including the status of her relationships with Max & mom Jessica. Video & recap! https://t.co/qWiJQye7ZY pic.twitter.com/ZU3ilhNqbw

Chloe stated in her own recent YouTube video that she and Max are split up, but she still hopes and believes they will get back together eventually. Max echoes those sentiments in his video when asked if they are still together.

“It’s kind of complicated. In my mind, I know we’re still together,” Max says. “She says we’re not because I made mistakes and, you know, she doesn’t want to be with me right now. But I know, and I’m determined that with this new job I just got and me staying sober, that if I work and provide for my family, she’s going to want to be with me. I know she loves me. It’s just a matter of not messing up again. It’s a matter of staying on track, and I think everything will be fine.”

Max even talks about marriage. “The only way I’m going to propose to Chloe is when I get my sh*t together,” he admits. “When I get a car, when I get — when I feel financially, emotionally and spiritually stable to propose, that’s when we’ll get married. And the same thing goes for her, when she feels fit to engage in a marriage.”

As far as Max’s arrest for assault on December 30, he explains the police report that alleges he threw a phone roughly fifteen feet across the room, hitting Chloe in the face. “I did not assault Chloe, like, I didn’t beat her up. None of that,” he clarifies. “We got in an argument. When we get in arguments, it’s pretty bad arguments. Like, we yell and scream at each other. I tried to defuse it, and most of the time I do.”

When Max’s attempts to defuse the situation don’t work, that’s when objects start flying. “I get angry and I throw stuff,” Max says. “That’s my issue, and I’ve been going to anger management for that. I would never hit my girlfriend on purpose, and I’m not minimizing or making any excuses for throwing things. It’s something I need to work on, and I hope to God she’ll forgive me for it. But, I would never put my hands on her. I mean, we’re young. We’re immature. We don’t know the best way to resolve issues at this age.”

From this point on I will be offering up responses to Max’s statements.

MAX: [Explaining his felony theft arrest and conviction.] The burglary charge was from when I was in high school. My friend lended me his grandma’s credit card. I went to the grocery store. This was right before Ava was being born. So, I stupidly use that credit card. Even though he said I could, he’s like, “Yeah, use my credit card. Go buy some diapers and just pay me back, you know?” And because, you know, I thought he was a good friend and helping me out. Instead of saying, “Hey grandma, I let him use a credit card without asking you for permission.” He said I stole the credit card. So that was what put me on probation.

A bad situation is going to get worse for @TLC #Unexpected couple Chloe and Max because he was recently arrested for allegedly taking credit cards and $$ from his friend's 77-year-old sleeping grandma: https://t.co/lZesLUxAUy

RESPONSE: Max was initially charged with burglary and theft after allegedly sneaking into the bedroom of his friend’s 77-year-old grandmother, who was asleep at the time, and taking items from her purse. Those items included two credit cards, $545 in cash, and a $95 casino voucher. Max used the credit card to buy $12.33 worth of food at McDonald’s before heading to a Fry’s electronics store where he purchased a mini-fridge, toiletries, and clothes totaling $320.26. Both purchases were confirmed with receipts and video footage of Max using the card.

Max would eventually plead guilty to felony theft, and the burglary charge was dropped as part of the plea deal. He was ordered to pay $972.59 in restitution, an amount that includes the credit card purchases, $545 in cash, and the $95 casino voucher. The alleged incident took place on June 8, 2018. Ava was born on July 11, 2018. Max was 18 at the time, but I do not know when he graduated high school.

MAX: Ever since I’ve been put on probation, all these articles on Starcasm have been coming out. It obviously made Chloe’s parents Jessica and Nate dislike me, and that’s kind of when all the drama started. They got a restraining order on me. They wouldn’t let me in their house. They basically despise me and hated me from that point on. There’s a bunch of other little things I did but not that serious. I gave them reasons to not like me, but I will get into that.

RESPONSE: Chloe and Max made their Unexpected debut when Season 2 premiered on August 5, 2018, and it was clear from the very beginning that Chloe’s mom Jessica and stepdad Nate didn’t like Max. At all. Even when Chloe was still pregnant. Did things get worse when Chloe’s parents found out that Max had been arrested for stealing credit cards and money from the sleeping 77-year-old grandmother of his friend? Yes. I’ll let you decide who was at fault for that.

Although it’s not really important, I do want to clarify that we were reporting on Max’s arrest well before he was put on probation. There was actually quite a bit of drama leading up to the sentencing, including Max’s attempt to back out of the plea deal. I also want to point out that Max was initially sentenced to three months jail time, but the sentence was delayed in part because he was a young dad with financial responsibilities. Check out this EXTREMELY kind excerpt from the sentencing recommendation for Max:

Ultimately, the state wishes to make the victim whole, and to provide supervision and support for the defendant as he adjusts to the demands adulthood will certainly place on him. The state believes a lengthy period of probation is warranted, given the substantial amount of restitution the defendant has agreed to pay and his other financial obligations. The state is not requesting a period of initial jail, but believes that some deferred jail, to be served upon completion of a year on probation, might provide additional motivation to see the defendant through and remind him that this is a serious, adult offense, and he is unlikely to receive a suspended sentence a second time.

#Unexpected dad Max Schenzel's probation officer has been his second biggest supporter over the past 14 months, but it appears that she (and possibly Chloe) have had enough of Max's antics. https://t.co/oIzjxPSQVr

MAX: Yes, I do have new legal issues. Online it does look a lot worse than it is.

RESPONSE: I will concede that things have seemed really bad for Max for quite a while now, yet he continues to skirt by with little to no serious repercussions. As a prime example, despite a rather lengthy list of non-compliance issues, Max’s probation officer recommended that his pending jail sentence be dismissed last year — a request that the judge signed off on.

Max’s probation officer later changed her mind and revoked Max’s probation after providing a much longer, updated list of violations earlier this month. The probation revocation combined with Max’s numerous other legal issues does seem bad, but perhaps he is correct in saying “it does look a lot worse than it is.” I suppose time will tell.

UNEXPECTED Tylor joins the Navy! Plus, he explains the cheating, his hair & the whole male stripping thing