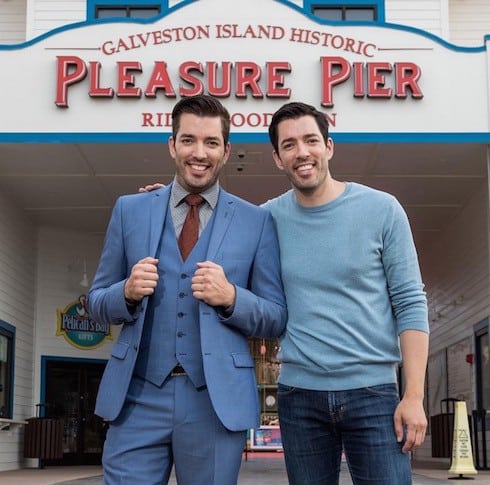 Ever since House Hunters participant Bobi Jensen’s now-infamous exposé of that show’s TV trickery back in 2012, HGTV’s offerings have been subject to the same withering scrutiny that other networks’ reality offerings face. Jonathan and Drew Scott are no different, and “Property Brothers fake” stories go back almost as long as the two’s major network debut. (Which actually came before the House Hunters exposé: the first episode of Property Brothers debuted on January 11, 2011.)

Six years later, though, the nature of the home improvement TV game has changed significantly–and the Scotts are at the center of it. If Fixer Upper, the highest-rated show on HGTV, is the face of the network, Jonathan and Drew are its steadily beating heart. As its most prolific personalities–Brother Vs. Brother Galveston is the fifth season of the third different HGTV show they’ve starred in and produced–the Property Brothers can afford to pull back the curtain on their productions without so much as a wink.

Consider their recent feature in New York Times. It made headlines for Jonathan’s firm condemnation of Donald Trump, along with the tease of a Fixer Upper crossover, but the piece actually opened with two scenes describing the deliberate recreation of natural events that the show’s cameras didn’t capture when they actually happened.

The first is simple enough: Jonathan “acting surprised” as he stumbles upon a toilet in a bathroom where none should be, then “yanking [it] out from the floor.” And the second is much more elaborate: a “high-intensity” and highly choreographed moment involving false danger and a collapsing chimney:

The day before, strong winds had ripped a thin metal chimney from the roof. It had landed to the side of the driveway. Now it was time to recreate the scene. “This is a high-intensity moment,” a production assistant whispered.

The director called to the house, “I need some workers out front!” A crew of tradesmen walked out onto a second-floor porch and pretended to work.

Drew ran from the house. He looked at the chimney with feigned shock. He rubbed his eyes.

“Let’s do the run out again,” the director said.

Drew walked back inside and ran out again. He pretended to notice the chimney again, and looked up toward the workmen. “Go inside, guys! I don’t want you to work outside; it’s too windy!”

The workers went back inside, and then came back out, and went in, for a third take.

The idea here isn’t that the Property Brothers fake shtick has been revealed at long last. Again: by now, Jonathan and Drew are a force unto themselves, well past the point where an exposé like that could damage their reputations. Instead, they’ve reached a place where they owe less to the genre they helped invent and more to themselves. And, as anyone who’s watched one of their shows for just a few minutes can tell you, the Scotts are wholesome, and clearly invested in a fuzzy end result. But, because the fuzziness is the ultimate point, Jonathan and Drew can both afford to traffic in set pieces that are a little too obvious (like a surprise toilet) and actually benefit from them instead of just getting an eye roll from their audience.

The Times feature also reminds us that the Brothers are multifaceted, perhaps not to be contained solely by HGTV for much longer: they’re working on producing three different films, and they’ve been approached about hosting their own talk show. For now, though, their shows are their bread and butter–and the rules that govern those shows are their own.

“At the end of the day,” Drew says, “it has to be interesting television.”

Brother Vs. Brother Galveston debuts Wednesday, May 31 at 9 PM on HGTV.

Did Princess Love really quit Love & Hip Hop Hollywood, or is she just holding out?