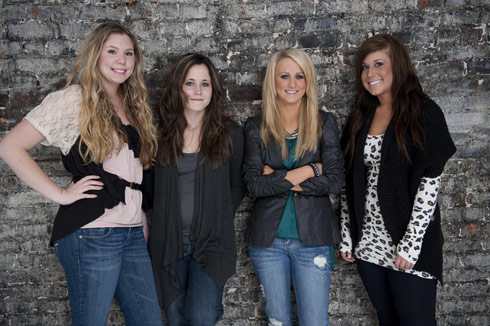 A recent report released by the Public Religion Research Institute called, “The Millenials, Religion and Abortion Survey” showed that viewers of the shows Teen Mom, Teen Mom 2 and 16 & Pregnant are much more likely to support abortion rights than those who have not seen the show.

The main purpose of the study was to attempt to understand the apparent paradox between moral values and a person’s particular views on abortion. How someone views the abortion issue should correlate with their opinions in regards to everything from politics to religion to gender biases but especially in the case of Millenials (the term given for the generation that followed generation-X) there has been a seemingly inexplicable ambivalent disconnect.

The study is extremely detailed but within its pages they included four surprising outside-the-box factors, as pointed out by Jessica Grose with XXFactor, in addition to the standard questions such as race, religion, and economic status. These additional factors were:

1) Whether the person has a “situationalist” or “principle-based” approach to morality.

2) Whether they know someone who has had an abortion.

As for the first point Millenials are much more likely to view moral choices, what is right or wrong, in a situational setting which directly correlates to them being more likely to be pro-choice. The opposite is true for those who fall under the “principle-based” grouping. For items number two and three the numbers of pro-choice people increase if they’ve seen a friend go through an abortion or have tuned in to Teen Mom. As for the 4th category listed above, this situational influence causes those people who have seen an ultrasound to likely trend pro-life.

This is some pretty heavy reading but here’s the direct part of the study in regards to Teen Mom that can explain the findings better than I could: 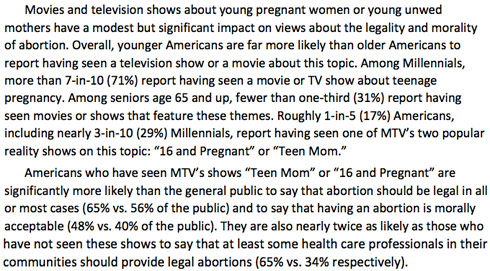 In summary, a lot of young folks are watching the Teen Mom franchise and since many times their moral compass is situational based the influence of seeing these young, usually unwed mothers struggle as they give birth and raise their children influences these viewers to have a more pro-choice attitude when it comes to abortion.

When reading up on this I was reminded of the follow up special with Dr. Drew when Markai Durham considered having an abortion when she became pregnant for the 2nd time. She later followed through with that difficult and personal decision.

For fans of Maci, Farrah, Catelynn, Amber, Jenelle, Chelsea, Kailyn, Leah and the rest I ask you, have Teen Mom, Teen Mom 2 and 16 & Pregnant influenced your opinions in regards to abortion? It’s a fascinating question.