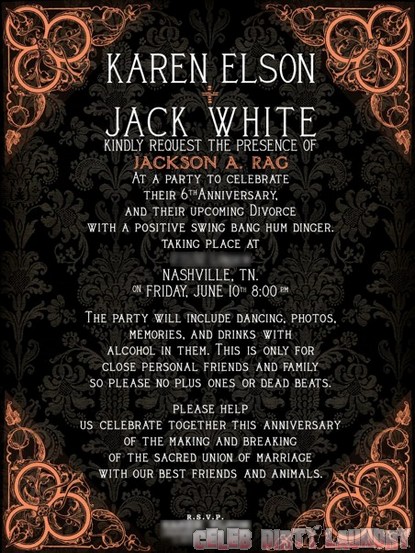 Tonight is a special night for musician Jack White (35) and his model/singer wife Karen Elson (32). The couple are celebrating their 6th anniversary, and the upcoming divorce with a joyful bash.

“Karen Elson and Jack White announce today that they are getting divorced,” the two say in a joint statement released by their rep. “We remain dear and trusted friends and co-parents to our wonderful children Scarlett and Henry Lee. We feel so fortunate for the time we have shared and the time we will continue to spend both separately and together watching our children grow.”

It’s refreshing to see a couple able to handle a divorce so well, more people should take a note. Jack White actually has a track record now of remaining close friends with his ex-wives. He was married to Meg White on September 21, 1996, took her last name, and formed The White Stripes with her. They were divorced March 24, 2000, but tried to maintain to the media a myth that they were brother and sister. Even after the divorce they continued making albums and touring together for several years. Two years ago Meg White married Patti Smith’s son Jackson Smith in Jack White’s backyard. There were rumors that the band was going to have a comeback, but this year they announced they were done for good.

Karen Elson also found some success in music while she was married to Jack. A year ago, May 2010, Karen released her own singer-songwriter album The Ghost Who Walks. She’s also been highly visible in every woman’s magazine you pick up as the spokesmodel for St. John.

Below are Jack and Karen posing together in 2009, with their matching pale skin and complimentary shocking black and red hair in top form. BTW, when’s Tim Burton gonna cast Jack in a movie already? 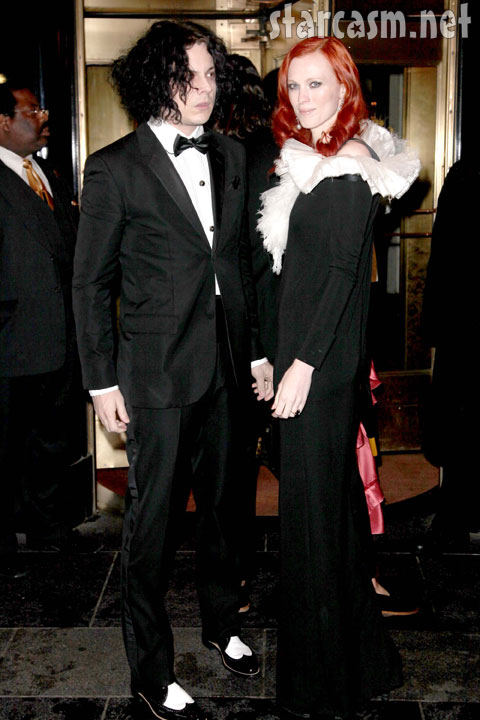 It’s Official, Jack White and Jay-Z have recorded a song together