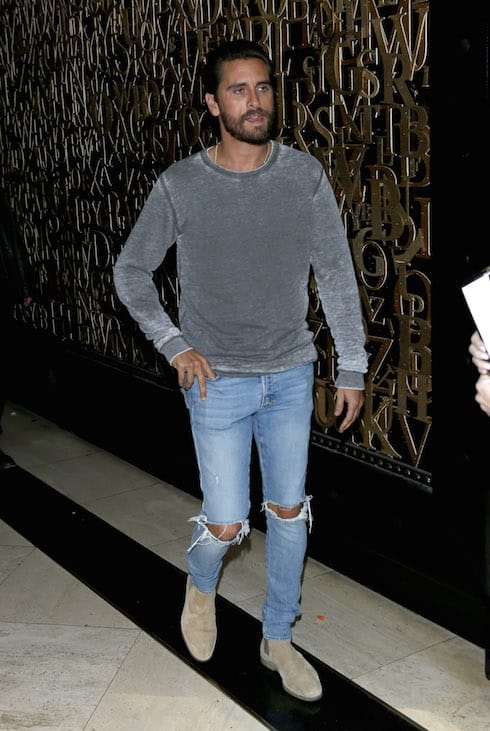 The latest Scott Disick update sees the reality TV star making a series of potentially conflicting statements regarding his sobriety. Disick’s fans have been worried about his health ever since a string of reports alleging weekend-long binges and overdoses emerged this past winter; now, Scott says he’s clean, though his actions might suggest otherwise.

A new Hollywood Life article reports a tearful conversation between Scott and Caitlyn Jenner, one which took place during filming for I Am Cait Season 2. According to the article, Scott is sober–but that doesn’t mean his battle is easy. “I’m obviously not drinking or doing drugs,” Scott tells Caitlyn. “So, I’m just alone with my thoughts every night, and it’s tough.” Scott also touched on his feelings for Kourtney Kardashian, admitting that he “would love to see us work everything out, and be in love again, and watch movies together, and be intimate, and love each other, and be best friends,” but further stating that he doesn’t know if a reconciliation is possible.

However, it’s not clear when the I Am Cait scene was filmed–and a People dispatch from Coachella calls Disick’s contention into question. According to the latter publication, former NFL quarterback Johnny Manziel stopped by the Kardashian table at the music festival, which Scott was sharing with Kendall and Kylie Jenner– and “poured himself drinks from their bottles” before “hanging” awhile.

Again, it’s not clear exactly what was in the bottles, given that two minors were at the table, but People‘s article is primarily about how Manziel “arrived wasted, partied wasted and stayed wasted.” Disick also recently completed his most recent residency at Las Vegas’ 1OAK Bar and Grill–at least his fourth since New Year’s Eve 2015:

Keeping Up With The Kardashians Season 12 will debut Sunday, May 1st on E!

RELATED ARTICLES: What is Scott Disick’s net worth? How does he make his money?

REPORT Scott Disick’s drug use is tearing the Kardashians apart

Kylie Jenner plastic surgery: Teen under fire for using ‘extensive’ cosmetic work to get her look