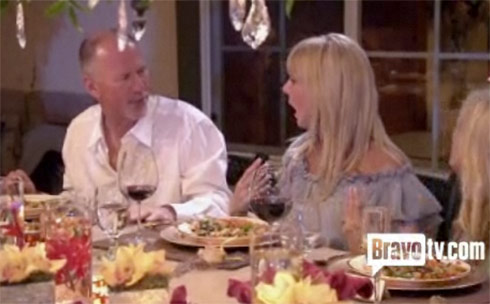 In tonight’s episode of The Real Housewives of Orange County fans are treated to another California Dinner Party From Hell as Vicki Gunvalson and her husband Donn continue their marital implosion with a terribly awkward and vitriolic discussion about why they never had kids together.

Vicki reveals that she wanted to have three or four children with Donn, in addition to her son Michael and daughter Brianna from a previous marriage to Michael Wolfsmith. Donn suggests that he also wanted kids but the two were just scraping by for the first few years and then it just never seemed to happen. Here’s a preview clip of the dramatic awkwardness in which it is obvious that the animosity between Vicki and Donn has reached the point of no return:

Donn seemed a bit overly flabbergasted by the fact that Vicki would bring up the issue of not having kids, which made me think there might be more to the story than they were letting on – and that’s exactly what Vicki’s ex-husband Michael suggests on his blog!

Before I get into his claims, I should reveal that the things he says are on an embittered blog called “Conversations with Wolfy,” the sole purpose of which is to badmouth his ex-wife Vicki Gunvalson and expose her as a very unpleasant person. The blog consists of conversations between “Wolfy” (Michael) and “NiftyK” (His current wife Ellen) with links to anything and everything on the web that has something negative to say about Vicki. So, the source isn’t exactly The New York Times here. But, the things being said by Michael about Vicki are so defamatory that I would think Vicki would have unleashed the legal hounds by now if there wasn’t some truth to it. (Of course it could just mean Vicki doesn’t want to draw any attention to Michael or the blog.)

Anyways, here are some excerpts from Michael Wolfsmith’s blog which suggest Vicki had a long-term affair with Donn and that she was pregnant with Donn’s child prior to having a “procedure.”

From “Tramps and Stamps” on October 21, 2010
NK: She has a pic of Michael and Briana on facebook “MY Wonderful Kids!” Interesting, there’s just the two of them, didn’t Vicki make a trip to California after Briana was born? It was rumored she went to see Donn.
W: Yezz
NK: Didn’t she suddenly need a “Procedure” about 8 weeks later?
W: Yezz

And next Michael suggests Donn and Vicki were having an affair for seven years! (Vicki married Donn a year after divorcing Wolfsmith so there is a bit of complicated math involved)

From “Happy Halloween to all the Zombies out there.” on October 31, 2010
NK: So Vicki is divorcing Donn after sixteen years.
W: Don’t forget about the eight years she was seeing him on the side.

And here is more about “the procedure” from December:

In April Michael talks about why Donn never adopted Michael and Brianna and having to pay for “the procedure.”

From “The Sweet Smell of Desperation” on April 9, 2011
W: Oh yeah! It’s ALL about control. When I stopped being her little “trained monkey” is when she seriously started “courting Donn”. She was interested in him from the moment she laid eyes on him, he was her boss at Home Depot and she saw her “ticket to riches” back then. Problem was , she was already married to me and her mom didn’t believe in divorce. Also I just bet Donn made it clear he didn’t want kids and JoAnn was always harping at Vicki to get pregnant.
NK: Yeowza!
W: Look at how she has managed to keep total control of Michael and Briana, completely excluding me and my family from their lives. I didn’t get the chance to raise my kids!
NK: You know there was some talk recently about Donn not adopting them.
W: I would NEVER have agreed to that. She was just throwing that in his face. In all this time he was not ALLOWED to develop a relationship with them, not that I care about him.

If you have the stomach for lots of vitriol and bitterness, there is a lot more on the blog. Personally I think it’s inflated spitefulness for the most part, trying to get some sort of official rise out of Vicki. But, after seeing the clip of Donn and Vicki talking about not having kids (as I mentioned earlier) I think there is something they’re not telling us.

RHOC Why is Gina Kirschenheiter getting a divorce?