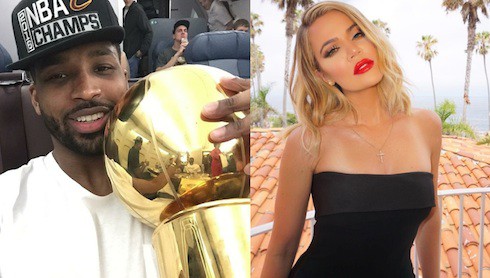 The Khloe Kardashian boyfriend situation is now officially “getting serious.” That’s according to the latest rumors, which note the how much time Khloe and NBA star Tristan Thompson, 25, have been spending together of late–and how much camera-friendly PDA they’ve been laying on at very high-profile events. It was only nine days ago that the initial reports of Khloe’s then-fling with the Cleveland Cavaliers’ forward began to surface; at the time, it sounded like the two engaged in some heavy flirting and light petting during a group house hunting event in Beverly Hills.

However, things accelerated quickly; just a few days later, the two spent a sun-soaked weekend together in Cabo, and were reportedly becoming very close indeed. The two were definitely “friends with benefits,” claimed an alleged insider with close, personal ties to the situation–and, even more than that, “Tristan…is Khloe’s type,” and “She is not denying that she finds him attractive and would consider [him] more than just the fling.”

Which is handy, because now Khloe’s fans and detractors alike are abuzz over the pair’s steamy makeout session during Drake’s recent concert at the Staples Center:

An E! report on the situation further pointed out that Tristan has also met–and won at least the tacit approval of–Kris Jenner, with whom Khloe and Tristan fooled around on Snapchat for some time.

Reportedly, Khloe has earned the ire of her family for bailing on an important social obligation to be with Tristan: she and he were gallivanting about on Mexican beaches while the rest of the Kardashians were hard at work in New York during Fashion Week. (Even Tyga made an appearance.) Their absence is perhaps unsurprising, though, given that at least one report suggests Khloe and Tristan are “getting serious.”