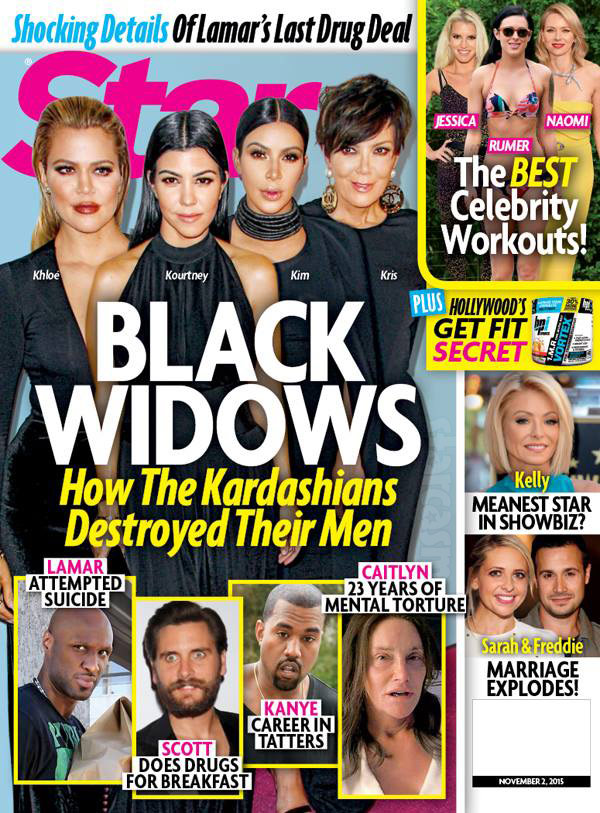 As Lamar Odom continues to struggle to recover from a nearly fatal overdose in a Los Angeles hospital, Star magazine is leaving decorum behind as their new issue includes photos of the Kardashian women along with the headline, “BLACK WIDOWS: How the Kardashians Destroyed Their Men.”

Under the photos of Khloe, Kourtney, Kim, and Kris, the cover features photos of their men with brief descriptions of what has happened to each:

(Kris Humphries, Robert Kardashian, and Damon Thomas are not mentioned.)

On Star magazine’s website, they introduce the cover story with:

Lamar Odom’s tragic downfall wasn’t the first drama-filled scene for the Kardashian brood, each of them—Kris, Kim, Kourtney and even moreso, Khloe—must be feeling a Kardashian Kurse is on the family name when it comes to relationships.

As far as Lamar Odom specifically, the magazine says:

In the backs of their minds, everyone close to Lamar Odom had feared this day would come—being found unconscious at a Nevada brothel—following a three-day binge on cocaine, alcohol and herbal Viagra. But this wasn’t surprising to those who tried to ween him away from marrying into a family that seems to send people down dark paths.

The cover was released earlier today, but it is already drawing criticism from those who think the tabloid has gone too far — which is a rare response in an industry where going too far is the standard.

So what do you think? Is Star magazine’s “Black Widows” cover story taking things too far?

Regardless of your opinion, you would have to admit this ridiculous photo and caption for Scott Disick is clearly over the top: 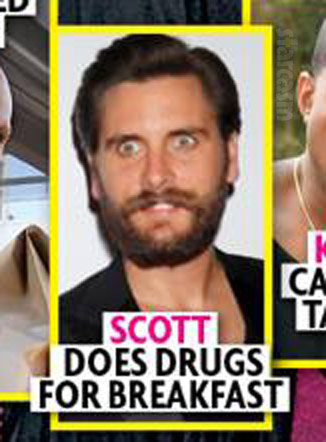 Of course, knowing Scott, he will probably use the photo as his Twitter profile picture.

Kourtney Kardashian update: Star reveals she is ‘definitely not’ back with Scott Disick