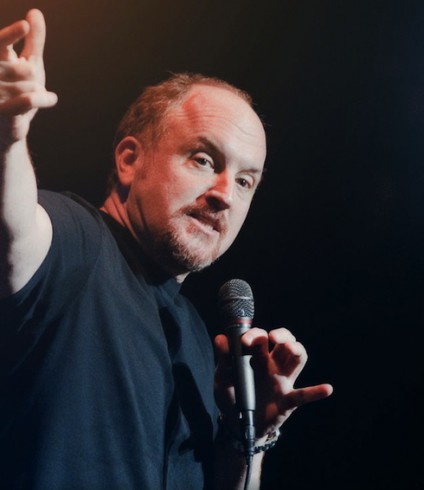 The first incident reportedly took place a few years ago at the Aspen Comedy Festival. According to the Gawker article where the allegations were first described, the encounter went like this:

At the Aspen Comedy Festival a few years ago, [Louis CK] invited a female comedy duo back to his hotel room. The two ladies gladly joined him, and offered him some weed. He turned it down, but asked if it would be OK if he took his d!ck out.

Thinking he was joking (that’s exactly the kind of thing this guy would say), the women gave a facetious thumbs up. He wasn’t joking. When he actually started jerking off in front of them, the ladies decided that wasn’t their bag and made for the exit. But the comedian stood in front of the door, blocking their way with his body, until he was done.

Commenters have further noted that “friends in the biz” say Louis does this sort of thing often, and always at inappropriate places–for example, at the dinner table, or at a bar.

The allegations have existed for years, but never made it out of the world of stand-up. In March of 2012, Gawker ran a blind item entitled “Which Beloved Comedian Likes to Force Female Comics to Watch Him Jerk Off?“, in which Louis CK was not named. In that article, the unnamed female comic the Gawker writers approached for verification rebuffed their e-mails by saying “first of all, your facts are wrong. and secondly, i don’t want to be a part of this story. i’m sure you understand.”

When the writers persisted, the woman shut the door on a follow-up: “please don’t contact me about this matter anymore. Breast [sic] of luck to you.”

As DeathandTaxes points out, though, there’s still nothing substantial to go on. The most damning thing working against Louis CK is a culture increasingly aware of the pervasiveness of sexual harassment and increasingly intolerant of it.

However, without an admission of guilt on the part of the accused, justice can be hard to come by. The overwhelming number of women who’ve come forward to accuse Bill Cosby of sexual misconduct–to accuse him, in many cases, of outright rape–led to a high-profile criminal case against Cosby, but no conviction. And despite mounting speculation that Cosby would simply retire following the conclusion of his most recent tour, no official announcement was ever made.

In Cosby’s case, though, women are coming forward voluntarily, and letting their names be known. And they’re telling stories of direct threats by Cosby–that if they spoke up, Cosby would end their careers, or damage their reputations in other ways. Right now, the most damning evidence against Louis C.K. is the fact that he likes to tell embarrassing stories about himself. It’s not impossible to listen to a Louis CK album, hear these allegations, and think “Yeah, I could see that guy doing that.”

UPDATE – For the first time, Louis has addressed the sexual harassment allegations surrounding him. While supporting his film I Love You, Daddy in an interview with the New York Times–the plot and themes of which mirror some of the stories about Louis CK, along with those of Woody Allen–Louis was asked directly about the allegations.

“They’re rumors, that’s all it is,” Louis said, further explaining that he doesn’t think it was a “good idea” to discuss the rumors in the press. Click here for the full exchange.