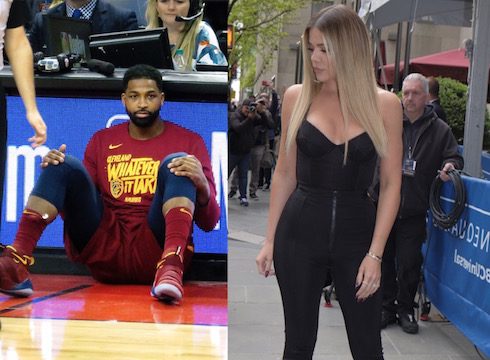 A Khloe and Tristan breakup seems to be imminent — and it sounds like Khloe might want to break from her baby daddy as public and visibly as possible. A trio of new reports suggests that Khloe is preparing to split from True’s father while back home in the comfort of Calabasas, surrounded by her family, and with Tristan grinding it out on the court a continent away.

Just days after the Kardashians reportedly told Khloe “It’s him or us,” all signs point to the 33-year-old first-time mom being turned off by a series of Tristan’s missteps. The first came when Tristan returned to social media to complain about how he’s been treated by tabloids and fans alike in the wake of his still-expanding cheating scandal.

And the second came when Tristan apparently gave his playoff tickets to Lani Blair, the Instagram model with whom Tristan was first spotted cheating just days before True’s birth last month. In Touch has it on good authority that since “Khloe told [Tristan] she isn’t going to any of his playoff games in Cleveland,” Tristan doubled down on his bad decisions by “[giving] the tickets to his sidepiece Lani,” about whom he is “crazy” and through “trying to hide.”

Speaking of hiding, right about here is where we should point out that Khloe has been “stuck in Cleveland” for approximately seven weeks, after deciding to give birth in the city in the first place so she could be closer to Tristan. The rest of the Kardashians flew out briefly following True’s arrival; other than that, it seems like Khloe’s been alone on Lake Erie since March.

So she’s understandably antsy, and eager to get her long-rumored fitness empire off the ground. People‘s latest claims that Khloe is hungry to have her pre-baby body back, and “getting back to her normal workout routine” has become her highest priority after being a good mother.

Khloe’s “going to be the hottest mom around,” gushed the magazine’s confident insider, who added that “Khloe stayed in great shape during her pregnancy,” and that the time to “be kind to herself” post-pregnancy has come to a close. “Working out is a big part of Khloe’s life and she’ll be back in action in no time.”

On top of that, it seems there might even be an informal date for the Khloe and Tristan breakup: Khloe is planning a triumphant return to the Kardashians’ Calabasan kingdom this Mother’s Day, Sunday, May 13.

Per ET, Khloe “will be with her family for [this very special] Mother’s Day,” the first for both Khloe and Kylie and Kim’s first with newborn Chicago.

Khloe and Tristan “are in contact,” but the last few weeks alone have been “good for [Khloe],” who’s used the time and space to regain her independence “and work through everything.” Their source couldn’t confirm that Khloe and Tristan’s long-rumored wedding plans are officially off, but appeared to suggest that Khloe has grown accustomed to Tristan’s NBA schedule has keeping him away for long stretches.

On that note, the NBA hasn’t yet announced the schedule for Games 5, 6, and 7 the Cavaliers’ and Raptors’ Eastern Conference Seminfinal matchup, which only began yesterday. However, the teams’ first four games are set for every other day between now and Monday, May 7th — which suggests that if the series goes a full seven games, the final game will be played on Mother’s Day itself. The Cavaliers have to be hoping the series ends before then if they want their suddenly resurgent big man’s head on the court.