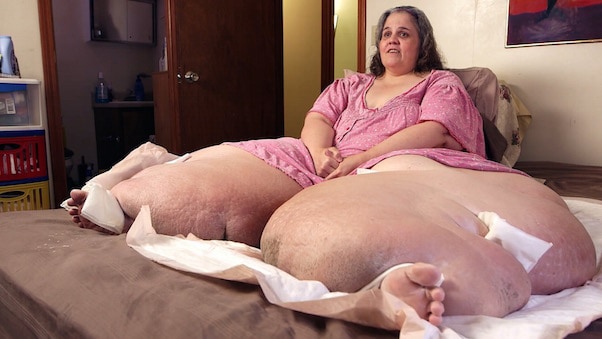 We’ve got an intriguing update on My 600 Lb Life Tracey Matthews today, as the Season 5 star has pulled back the curtain on some of the show’s production tricks and contract details. Tracey’s tea comes at a particularly compelling time for My 600 Lb Life viewers, considering that four cast members are now suing production company Megalomedia for negligence and an assortment of broken promises. (In late January, Starcasm broke the story of deceased cast member LB Bonner’s family filing the first lawsuit.)

Though her My 600 Lb Life episode aired just as the show’s cast members began attracting serious attention on social media, Tracey Crum-Matthews has been one of its quietest participants. When last we checked in with her, Tracey had long since bid farewell to Houston, returning to her home in Lorain OH. Her 201-pound weight loss appeared to be holding steady, though Tracey hadn’t shared a new photo of herself in years.

However, over the past few months, Tracey has been engaged in an extended Q&A with many of the show’s fans. Her unusually candid responses to some of their many questions offer a sometimes eye-opening look at how a My 600 Lb Life episode gets made — as well as how some incorrect beliefs about the process still persist among viewers.

My 600 Lb Life Tracey today: How is she doing now?

We’ll start with the good news: My 600 Lb Life Tracey today is doing well. She still suffers from lymphedema, though it seems the pain isn’t *quite* as bad as during her debut episode. To a fan who asked her to “please tell me [your legs] are OK now,” Tracey had this to say:

I wish I could. They are smaller but I still have horrible lymphedema. I had the one mass removed that is shown in my show but that’s it. I get around better so I’m grateful for that. I wish there was something someone could do about the others. I live by Cleveland Clinic main campus which is suppose to have the best Dr’s in the world but they can’t do anything.

Elsewhere, Tracey added, “I do walk with a walker. I haven’t had any other surgeries as of yet.”

On a related note, Tracey responded to a fan marveling over Dr. Now’s assertion that patients “should have no pain after skin removal” with a horror story from her own surgery.

“Dr. Now removed my one lymph mass on my leg,” Tracey said, “and it was the worst pain I ever had in my life. I’ve had other surgeries but none of them hurt as bad as this one. It was horrible!”

As for whether fans should expect to see Tracey in Where Are They Now? episode, it sounds like that’s still an option. “I hope so as well,” Tracey told the eager fan. “I haven’t gotten any call backs yet so we’ll see.”

Tracey also addressed the tantalizing possibility of a My 600 Lb Life reunion episode. It’s long been hoped-for and even rumored among the show’s fans, but, as of this writing, nothing like a cast reunion has actually happened.

“A lot of us have actually suggested the same thing,” Tracey revealed. “We would love to get all of us together.”

Though we’ve answered some of the “Does My 600 Lb Life pay” questions, Tracey’s answers are the first time one of the show’s cast members has gone on the record addressing them.

For starters, Tracey confirmed something we revealed in our article on how the show compensates its cast: for at least the last four seasons, participants receive a so-called “talent fee” of $1500 for their appearance. Should the cast member need to move to Houston — something not everyone on the show does — production company Megalomedia offers a $2500 moving allowance.

However, Tracey explained that cast members “don’t get that [money] until after our show airs on TV. Everything we spend until then comes out of our pockets.”

Reinforcing her point was a horror story that My 600 Lb Life Tracey today told about her own financial situation during filming:

We were told we would have to get a room one night [while on the road from Ohio to Texas]. I made reservations but we got no where near that hotel the first day. I lost my money I paid, then still had to pay to stay at a different hotel. It was crazy. By the time we got to Houston we had $13 to our name. Had to figure out how to get groceries and everything else. Then our car broke down a few days after we got there. We didn’t get no help with that neither. You can turn in receipts once your filming is done, for a very small amount, but until then [you’re] stuck.

Additionally, Tracey debunked a long-standing myth about My 600 Lb Life reruns. Despite rumors to the contrary, the cast does not get any residual earnings when their episodes air after the debut. “We don’t get paid for reruns at all,” Tracey said. “They can play our show a million times and we dont get a dime from it.”

Does My 600 Lb Life pay for surgery? How much is covered?

As we’ve also answered before, the cold, hard truth appears to be that the producers don’t pay for surgery. This question is especially relevant in light of the My 600 Lb Life lawsuits, three of which state that Megalomedia and the rest of the show’s production promised cast members that all bills would be covered. According to those lawsuits, when filming was done, the bill collectors came knocking.

“I have over $20,000 in medical bills that wasn’t covered from when I was on the show,” Tracey said. “The actual work Dr. Now does is covered, everything else is not. We also pay our own rent, bills, and buy our own food.”

When one fan posited that producers aim to keep the cast’s finances as precarious as possible, in order to ensure more drama, Tracey agreed. “That’s what I believe as well,” she wrote, adding, “The more drama = higher ratings.”

Is My 600 Lb Life real? Separating fact from fiction

It’s no secret that reality TV isn’t particularly real. But the issue of what on My 600 Lb Life is real and what is engineered by producers has gained increased relevance in light of those aforementioned lawsuits. All four of the current My 600 Lb Life lawsuits state that the show’s production company forced cast members to play up or invent drama with family members and friends solely for entertainment value.

And, according to Tracey, one of the show’s most infamous features is in fact 100% fake. The naked shower seen in every episode for the last few years is apparently now a requirement for every new cast member. We’ve addressed this topic previously, when Season 3 star Amber Rachdi told us she “didn’t feel comfortable showering in the nude on camera” and refused to do so despite a producer pressuring her.

However, in Amber’s experience a couple of years earlier, it seems cast members could earn extra money if they agreed to be filmed in the shower. By the time Tracey was on the show, the shower had become mandatory.

“They only show a few mins of the shower scenes on the show,” Tracey explained, “but they filmed mine for over an hour. That was the absolute worse feeling in my life. I really wish they would stop making us do that. Who wants to be naked, taking a shower, and get filmed by a man you don’t know?”

Tracey did add that “they only let certain people film the shower scene. The person I had,” she said, “was married, has a family, was very nice, and still to this day is my favorite camera guy.” But, all in all, the shower scene is “still just very degrading. Not something I will ever do again.”

If you’ve ever wondered why every My 600 Lb Life cast member has a clear shower curtain, Tracey answered that one, too. Producers “give us one to use,” she said. (Unfortunately, Tracey said they forgot the curtain on her day of filming, and made her “tape [her curtain] to the wall instead,” getting “water all over” the floor as a result.)

Also, producers do their best to make each cast member’s home a controlled set — meaning as little noise as possible. “When they film they shut all electronics off,” Tracey wrote, “including the fridge, freezer, anything that could make any kind of noise. They unplug everything. They also move stuff around.”

Finally, Tracey did reflect upon her overall experience, attempting to weigh both the good and the bad. Though she remains troubled by some aspects of production, Tracey said the “end result” made her participation worth the pain:

It was very hard for me to go on the show but I hope I was able to help at least one person get help if they need it. When you’re 5, 6, or 700 lbs, you’re miserable and have no life. So yes its hard to show the world your body and tell your life story but the end result is worth it. So many people from the show now have a life again. They have their freedom back. Its so great to be able to go places and do things besides being trapped in a bed all day.

You can revisit Tracey’s My 600 Lb Life debut on the show’s official site.