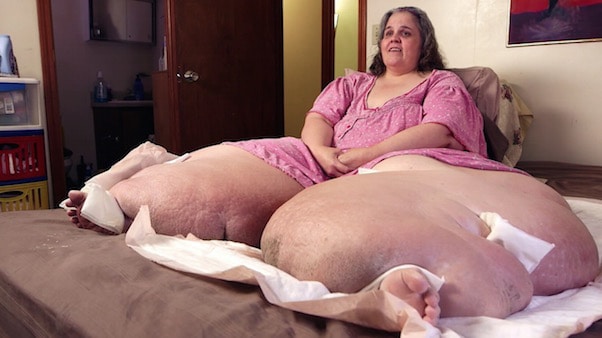 It’s been a long time since we’ve heard from Tracey Crum-Matthews, whose unusual weight loss journey served as the final episode for My 600 Lb Life Season 5. Fortunately, we’ve got a My 600 Lb Life Tracey update, including potential new progress, and a new look at the possibility that Tracey could feature in a future Where Are They Now? episode.

A 44-year-old Ohioan and grandmother, Tracey began her story at a peak weight of 606 pounds. Unusually, though, the overwhelming majority of Tracey’s weight came from her legs, where massive lymphedoma swellings had left her almost completely unable to walk. Compounding matters was the fact that Tracey also suffered from cellulitis infections. In short, almost any movement involving her legs likewise involved pain and suffering — which meant her decision to drive from northern Ohio all the way down to Dr. Nowzaradan’s Houston office would involve certain agony.

“It’s been a long time since I’ve been in a car, and now I’m going to be in one for at least twenty hours,” Tracey explained, while she, her husband Anthony, and her mother Karen prepared for their journey. “So I’m really nervous, but I know I cant go on like this any longer.”

Because Tracey’s legs were far too swollen for her to sit in even the biggest seat in a conventional car, she had to sit in the way back of the van she and her family used for the journey. This meant that she had enough room — but that Tracey also had no way to strap herself in, and nothing to lean directly up against. And it didn’t take long for fatigue to set in.

“It’s really hard, sitting back here with no place to really lean back or let my legs stretch,” Tracey explained. “When my legs start to really hurt, Anthony has to rub them, and help me move them around. Because I can’t just get up….But they can get so sore, that the pain is just excruciating.”

Ultimately, Tracey did make it to Houston, where the real work began. Before long, she’d lost an encouraging amount of weight: 90 pounds in a matter of months. Tracey then gained about half of those pounds back. She was at risk of being dismissed from Dr. Now’s program entirely when Tracey doubled her efforts — and after nine months in the program, she’d dropped 167 pounds, bringing her down to 439.

That success got her Dr. Now’s approval for surgery. But Tracey’s story was unique in that instead of weight loss surgery, Dr. Now decided to perform skin removal surgery on Tracey’s legs. He explained that the removal of excess weight from the place where Tracey’s weight was concentrated would further reduce her lymphedemic swelling. And the surgery was a success: by the end of Tracey’s first year of filming, she weighed 405 pounds, after having lost a total of 201. The relief and happiness on her face said it all: 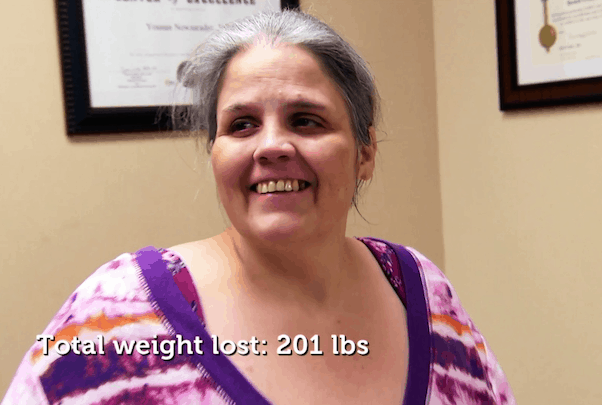 But the relief didn’t end with mere weight loss. As Tracey explained at her episode’s conclusion, her increased mobility and improved outlook on life had removed a great deal of her husband Anthony’s caregiving burden. As a result, their relationship was in a healthier place, too:

I’ve missed out on so much life, and I don’t want to do that even for another second. I want to enjoy life — and I want to do it with Anthony, and my family. Things were hard there, for a bit, between me and Anthony, because this whole process has been stressful for us. But ever since the surgery, and since he hasn’t had to do everything for me? I feel like we’re starting to grow in a new direction. So I’m excited for the future again, and for us as a couple….and I wouldn’t change any of this journey because of that.

Unfortunately, there’s been very little in the way of a My 600 Lb Life Tracey update since her episode aired. However, we do know that Tracey is no longer living in Houston; she and Anthony have moved back to their Ohio home. But, as we’ve reported in the past, there doesn’t seem to be too strong a correlation between My 600 Lb Life cast members who’ve moved away and those who’ve had less successful weight loss journeys. And Tracey does still seem to have a strong support system among her fellow cast mates — so, despite the lack of recent before-and-after photos, there’s every reason to believe that Tracey continues to find weight loss success.

Until we find out whether Tracey has been filming a follow-up, you can revisit her original episode on the show’s official site.