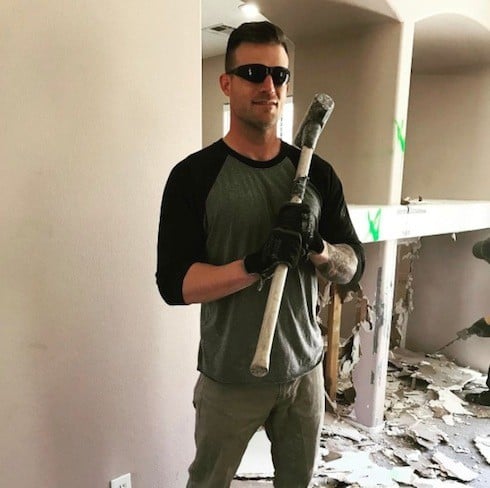 HGTV recently announced five brand-new spinoffs of the network’s hugely popular show Flip or Flop. First up is the Las Vegas edition, starring former MMA fighter Bristol Marunde and his wife Aubrey; the two are already well-known in the greater Vegas area, where they’ve been flipping homes for years. But Bristol is originally from Fairbanks AK, and grew up in Washington state–where an incident involving his Batman-like beating and capturing of a rapist earned him some of his first headlines.

The single best retelling of the story that we’ve been able to dig up comes from Bristol’s 2012 interview with MMAMania.com, so we’ll let him tell it:

…That was a crazy story. This happened quite a few years ago in Bellevue, Washington outside of Seattle. It was 11:30 at night and I heard screams for help right next door to the apartment I was in. They were screams for life. It was very scary. I can still remember hearing that bloodcurdling scream and I opened the front door and a big guy came running out of the front door of my neighbor’s. I knew she was a single lady so I looked in her house and she was back-down on her kitchen, laying on the floor.

I don’t know what possessed me but I chased this guy down the street. There was probably a half mile of street where I ran after him and all I had on was a pair of shots. I didn’t even have shoes or a shirt on, it was straight Cops. I’m embarrassed looking back at it but I chased him down and cornered him in a parking lot and I just landed the best head kick I’ve ever had in my entire life, something that I still haven’t been able to replicate since in a fight.

He came at me and he put his hands up like he was gonna fight me and he was a big guy, like 220. He said, “Listen, man. I didn’t do anything!” I don’t know what possessed me, man, but I launched a big head kick and knocked him down and I picked him up and held him there and I told him, “If you move, I’m gonna kill you!” and I held my fist up right at his face and he just went limp and the Bellevue police showed up shortly after and arrested him.

I guess he had been wanted in a bunch of other states for burglary and attempted rape so I helped put him in jail, well the police did, but I caught him. The mayor and the chief of police gave me a citizen’s award and all this stuff.

In an earlier re-telling for FightTimes, Bristol offered a slight variation on how exactly he subdued the rapist: “With all the training,” he said, “I just automatically knew what to do: I used my kicks and wrestling to subdue him until the police came along and arrested him.” Either way, it’s a terrific story–and we’re certainly not faulting Bristol for having a less-than-perfect memory in the heat of the moment!–but the single-kick-to-the-head version is definitely the better of the two 😉

Additionally, a 2007 Evil Master feature on Bristol says that the Bristol Marunde rapist story took place “two years ago.” So it seems that the encounter took place in 2005, when Bristol was 22.

Iggy Azalea’s DIY career: From cleaning toilets in Australia, to being a teen runaway in Miami