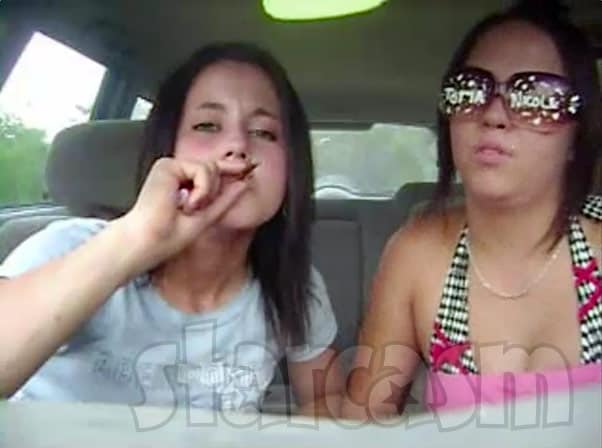 Judging from the Season 2 trailer and from Jenelle’s various online profiles (links below), she is a very confident 17-year-old who uses colorful language, has an affinity for marijuana, and absolutely no fear of conflict – which sounds like a perfectly volatile combination for the season premiere! 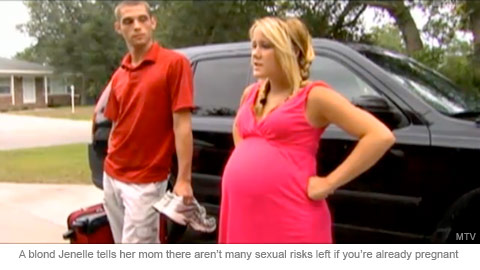 First, a little background info on Jenelle. She’s 17 years old and was attending South Brunswick High School in Southport, North Carolina when she found out she was pregnant in early 2009. Her son Jace Vahn was born on August 2nd, 2009. Here’s her autobiographical statement from her Myspace account:

I’m jenelle, and I’m not anything You Can Come Remotely Close to. I Wear my Heart on my Sleve and my emotions always dance around me. I Have the Biggest Heart, and I Hate Hurting People’s Feelings. I’m Very Sexual, and I Can Be a Perv. Also, I Have a Dirty mind<3 Oh, and I’ll always Say what’s on my mind! Even if it is Sexual. I’m done With Being a Sidewalk you can Step all over. Try again. I’m unbelievably Tacky and I’m So Ditzy it’s unreal. Sorry, I’m me. I’m Horrible at First impressions, So Try again and You’ll Have Better Luck. Give me a chance, and I Promise I’ll Give You What You deserve. I’m not conceited, it’s just my time to shine, and if you’ll be my sky, i’ll be your brightest star. I Know Where I Stand, and I Know Who I am, and I don’t need anyone to Tell me otherwise. I Usually Hold things in and Just deal, until I explode, and I need to Find a way to Fix that. Best Believe, If I Say I’m Going to do Something, Sooner or Later i will. I’m a Good Person, and I Have the Biggest Heart, But many People don’t Get to See that Side of me, Because They don’t Care to. I make mistakes every single day, I’m only Human, But I eventually Try and Fix them. I Will Knock Your Teeth down Your Throat if you mess With my Friends or Try to Get With my Boyfriend, and That’s a Promise. my Heart is open to anything more exciting than myself, So Stop Seeing me Through other People’s eyes or opinions, and Take a Look for yourself, I Dare you.

Alrighty then! Jenelle spends a lot of time on her formspring page answering questions, most of which deal with the controversial issue of smoking weed while pregnant. Here are a few sample pot-themed questions.

***AUTHOR’S NOTE*** I originally included “accusations of being a bad mom” as one of the topics Jenelle frequently addressed on Formspring, but judging from some of the comments we received I think people were misunderstanding that to mean I think Jenelle is a bad mother. As angry as all of her supporters seem to be, all I did was present facts and post her own responses to accusations – that seems impartial and fair to me – and nowhere in this post do I accuse her of being a bad mother.

Q: my opinion is that you as a person should be able to do what you want that makes you happy as long as it doesn’t affect jase negatively i still drink and i’m a mom, you just have to prioritize, just be the best mom you can be, and you’ll never regret 🙂

JENELLE: Jace yu mean.. and yes i make sure when i DO smoke im not around him and when i get back home im not high. plussss.. the only time i DO smoke is after my mom gets home from work and my mom is watching Jace for the night and he is already in bed.

Q: i dont get how any mother can smoke weed when they are prego and endanger there child like that. please tell me that one.

JENELLE: uhmm… drinking while yr prego is WAY WORSE then smokin a lil bud. and some doctors even RECOMMEND TO THEIR PATIENTS that they should smoke if they are nauseous 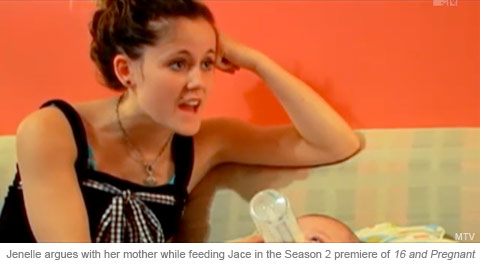 Q: do you people realize how many important people in the world smoke weed. obama admitted it ans so do many other people. its no big deal. my brother makes 2.5 million a year n smokes. get over it

JENELLE: exactlyyyyyy. and i guess obama is a sl_t and nasty b*tch for smoking also?

Q: i dont think that any doctor has recommended that a prego woman smokes weed when they are prego. what are you high now. get a grip on reality!

JENELLE: really? my doctor recommended it.

Q: thts funny. i highly doubt tht your doctor recommended it. maybe you are on some other kinds of drugs right now.

JENELLE: hahahahah riiiiight. im sober as f*** sitting here with jace and letting him see all the sh*t yall are talking. lots of doctors recommend it stupidf**k.

JENELLE: ohk, he isnt a retard now. he will never be, trust me ive done the research. ive even done a college paper on why to legalize marijuana. yu need to research the PROS AND CONS. not just the CONS.

Q: i think you seem to love your son alot. props to you for loving him and being a good mom. even when people drink it doesnt always result in bad effects (not like that makes it ok) i have seen that pot can increase a babys awarness though by gracenamber 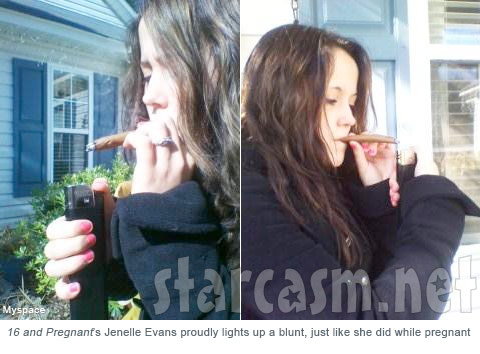 Q: im not jealous of a pot smoker like you. i love my life very much thank you. besides wht is there to be jealous of the fact tht your a horrible mom, a f***ing pot head and b!tchh..haha me jealous of you thts a laugh

JENELLE: yes i am a pothead and im PROUD. yah yu are jealous that im on the show. i have a beautiful son that loves me very much and thats all that matters. i buy him a new toy every month, i take him to the beach, i tickle him and make him giggle. so yah yr most likely jealous of everything i just listed.

Q: mahybe if you stop spending all your money on drugs then you would have more money to spend on your son dumba$$. and my daughter is the happiest kid tht you will ever met.

JENELLE: i dont buy weed or cigs, never. my friends support my habit for me. :] i bet if social services seen yr TRUE LIFE yu would get her taken away forever and ever. stop being a lil b*tch and grow up.

Q: ya sure seems like you give him the world. wht a world of smoking weed and being a bad parent. and you pretty much just admitted tht you are a sl_t. so keep your legs closed and quit smoking weed you nasty b*tch.

JENELLE: ive havent had sex in over 3 months now. ive been single for 4 months. i stay at home with jace every f***ing day. i smoke weed on my OWN time. my legs are sewn shut. :] i bet yrs arent. i bet yr just another jealous lil b*tch that cant seem to stop putting ppl down. and yu put other ppl down becuz yr life is so horrible and have nothing else better to do then take yr anger out on someone like me. :]

DAYUMMM! Jenelle don’t play! What do you think about the whole “smoking pot while pregnant” debate? Take the poll!

* Our poll feature has since been discontinued, but here is the question and the results:

What do you think about Jenelle smoking pot while pregnant with Jace?

Jenelle not only likes to smoke weed, she also likes making joint-smoking videos! Here’s one from the summer of 2008 when Jenelle was 15 or possibly even 14. The joint makes its first appearance at right around the :40 mark and then sporadically reappears throughout the rest of the video:

UPDATE – It appears as though Jenelle has “privatized” her YouTube videos, so no live action 15-year-old doobie toking for you! Here are a few more stills from the video, though – it should give you a pretty good idea. Just imagine Mia’s song “Paper Planes” playing loudly through the dashboard and a lot of giggling…

UPDATE – We’ve edited some clips of Jenelle and Tori together and shared the end result on Instagram. Unfortunately, due to copyright issues, we were unable to include the audio. So, you will have to add the M.I.A. song “Paper Planes” using your imagination:

Something tells me Jenelle will be the talk of the water cooler Wednesday morning! She can probably expect calls of support from celebrities like Willie Nelson and Snoop Dogg, although neither of them smoked grass while pregnant 😉

If you’re looking for photos she seems to update her myspace profile more often, but for questions or requests Formspring is the way to go.

UPDATE 2/13/10 – D’oh! It appears Jenelle has deleted her previous Formspring account and started a new one at http://www.formspring.me/J3N3LL3. But don’t get too excited, all of her replies to marijuana questions now get met with “No Comment.” I thought I would post a screen capture of one of her last Q&A entries on her previous Formspring account:

I’ve also done posts featuring 16 and Pregnant Season Two cast members Ashley Salazar and Nikkole Paulun, just click their names to find out more about them! I hope to update throughout the season to include all the girls, so stay tuned!

Make sure you tune in February 16 for the premiere episode of 16 and Pregnant!

UPDATE! CLICK HERE here for a bonus clip of Jenelle on a date with a feller named Jared after her break-up with Andrew!