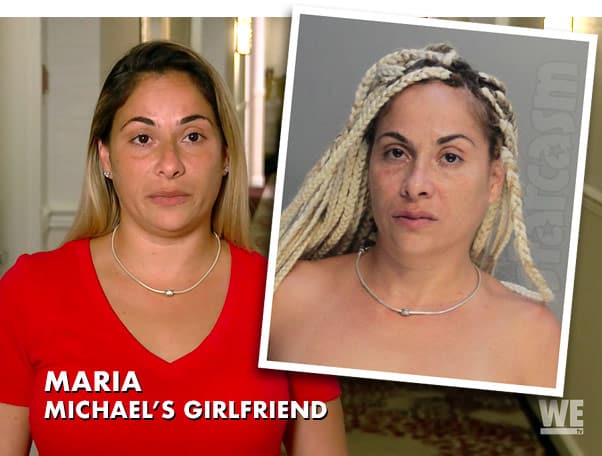 Love After Lockup: Life After Lockup Lothario Michael continues to add to his harem of lusty ladies as the convicted felon’s love triangle with girlfriend Meghan and wife Sarah was squared off this season with the addition of his Miami girlfriend Maria.

I don’t know if Maria can sing as well as Meghan, and she certainly doesn’t share children with Michael like Sarah, but Maria does have an advantage on her potential prison sister wives as far as topics of conversation with Michael goes because they have something important in common: experience living behind bars. (And when their conversation breaks down, Maria can always fall back on her experience doing prostutitorial type work.)

That’s right, Maria is looking for a little love after lockup herself! Maria Figuera has been arrested multiple times in Miami-Dade County over the years, including more than one charge of prostitution. And her dabbling with the wrong side of the law isn’t something resigned to her distant past as she was busted as recently as November of 2019 for allegedly assaulting someone over 65 years of age.

Here is a full timeline of her charges, according to Miami-Dade County court records:

August 18, 2005 – Trespassing on property after warning and resisting an officer without violence 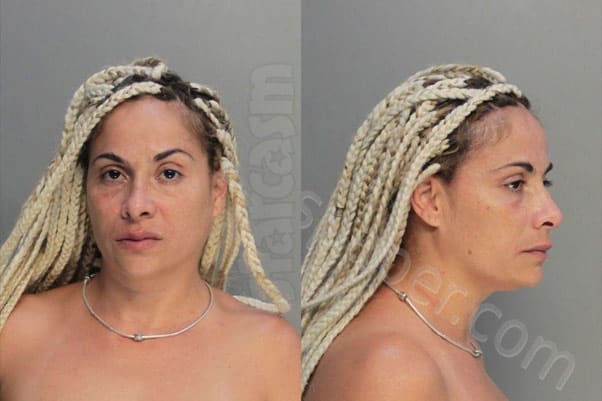 It appears that adjudication was withheld on all of Maria’s charges before 2010, and she cleared them all from her record in June of 2010 after completing probation. She was also hit with fines and court costs.

Court records also indicate numerous failure to pay notices on Maria’s pre-2010 cases, and all of them are listed as being “in collection agency status.” Perhaps she needs to hit Michael up on Venmo or Cash App for some of that WE tv cash?

The felony battery charge from last year was not prosecuted, but there was a stay away order imposed on November 8.

The records also clear up another major question that Life After Lockup viewers have been openly pondering all season: How old is Michael’s girlfriend Maria? The answer to that question is 35.

In addition to getting into trouble with the law, Maria also recently got into BIG trouble with Sarah! Maria posted a photo in bed with Michael and Sarah’s youngest daughter Rayne on Instagram a few days ago and wrote out a very tasteless caption: 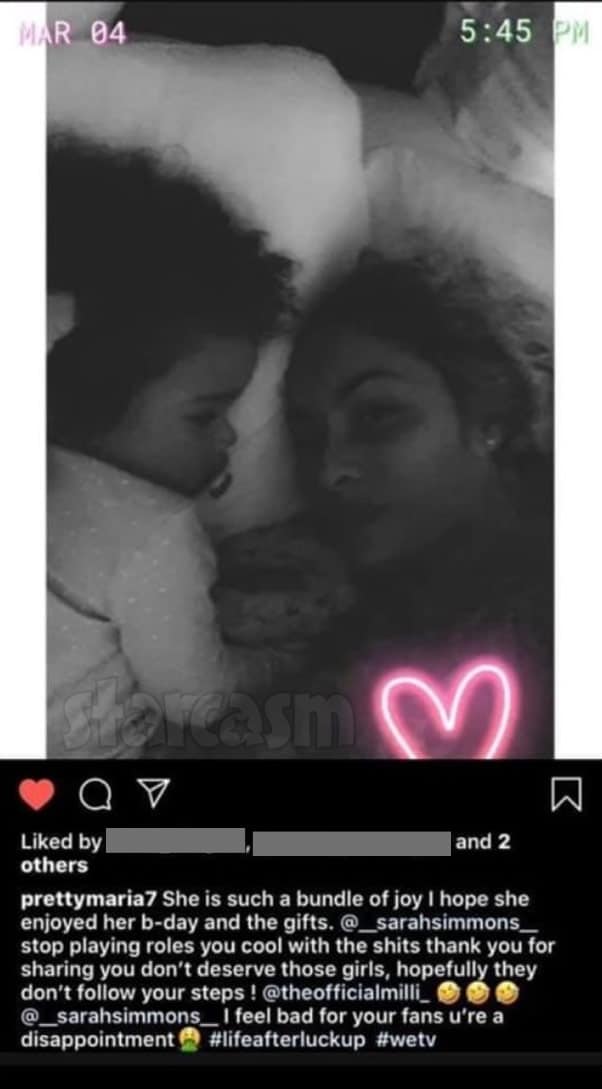 In case you have issues reading the text in the photo:

She is such a bundle of joy I hope she enjoyed her b-day and the gifts. @__sarahsimmons__ stop playing roles you cool with the sh*ts thank you for sharing you don”t deserve those girls, hopefully they don’t follow your steps! @theofficialmilli_ ??? @__sarahsimmons__ I feel bad for your fans u’re a disappointment ? #lifeafterluckup [sic] #wetv

As you would imagine, Maria’s judgmental caption did not sit well with Sarah. Here is her response from her Instagram story:

A lot of you want me to respond to Maria’s latest IG post. Yes I’ve seen it. And I wasn’t happy. I won’t tolerate a “grown woman/mother” using my child in a post just hoping to get to me. That’s straight trash. I spoke to her myself making it clear I’ll never respect her or be cool with her after that one ? She tried to apologize cuz she knows she’s wrong but I won’t ever forgive someone for using my innocent 1 year old to attack me on social media. ?

Sarah wasn’t the only one upset about Maria’s post. Michael’s sister Dayday also saw the photo and she is obviously not a fan of Maria’s either. Here is her caption for the screen grab of Maria’s post, followed by some of her interactions in the comments:

She so delusional man ?… I just can’t take it ???? I’m really bout to Flame her at this point cause what in the world goes through this woman’s mind? (there go her IG name since I couldn’t give it out last time?)

DAYDAY: AND IK SOME OF YALL GONE SAY “why are you getting in the mix” it’s not even about that at this point … this is beyond disrespectful!

COMMENT: She’s lucky Sarah stays cool, calm and collected.. Cause if she was posting my daughter like that we’d have a problem.

COMMENT: I love how you got Sarah and your nieces despite what your brother is doing. Way to stay loyal ?

DAYDAY: it ain’t even about Sarah she can hold her own, ?? but nieces? Oh yea I ain’t having it ?

COMMENT: Maria uses an infant as a pawn to terrorize the baby’s mother. If she’s capable of doing this publicly, what is she subjecting the girls to privately?

DAYDAY: MY POINT EXACTLY!!! But watch how I become the bad guy for saying something about it!

DAYDAY: Some of y’all saying mike allowed her to make this post. I’m sure he didn’t know she was going to post it and from what I hear it was a “post & delete” so he probably did tell her to take it off. Like I said before I’m sure him and Sarah handled it their own way.

To see how the love square between Michael, Meghan, Sarah and Maria plays out, be sure to tune in for new episodes of Love After Lockup: Life After Lockup airing Friday nights at 9/8c on WE tv.

For those of you looking for a potential ***SPOILER***, here’s video of Michael and Sarah being quite chummy together while exiting a liquor store together in Farmington, New York on Friday:

Perhaps they were stocking up for a Life After Lockup viewing party?

The embed is from Instagrammer @CrazyEyesKM2, who was also the first to uncover Maria’s arrests and memorable mug shots.