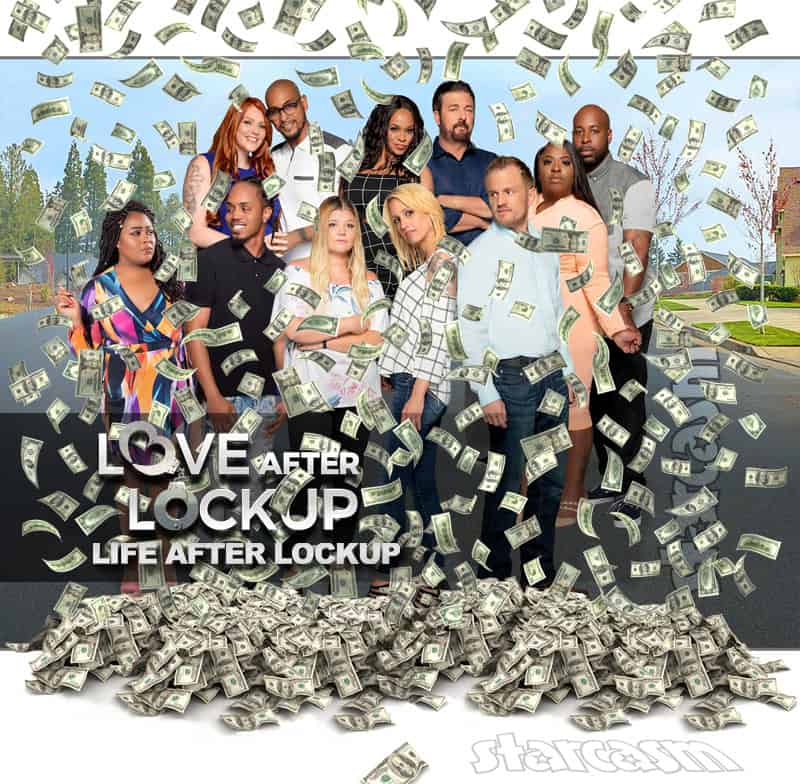 Tonight is the series premiere of WE tv’s new spin-off Love After Lockup: Life After Lockup featuring three couples and one trio from Season 2, plus Andrea and Lamar from Season 1. Clearly, one of the biggest challenges facing convicted felons once they are released is finding gainful employment, but that’s a difficult aspect for a reality show like this to convey because all of the convicts are gainfully employed — by the producers of the show!

So, how “gainfully” employed are they really? In other words, how much do the stars of Life After Lockup get paid? We have a clear cut, definitive answer for you!

First, I want to point out that the stars of Love After Lockup Season 1 reportedly received $1,000 per episode, which is decent enough pay for the amount of work perhaps, but is clearly not enough for most folks to live on by itself. (It was our understanding that the convicts did not get paid for Season 1, but we have still yet to confirm that.)

It’s a little bit different story for those cast members returning for Life After Lockup, however, as their pay rate looks to have been tripled! And the convicts DEFINITELY get paid! According to the pay stubs from one of the convicts featured on the show, that person received $3,000 per episode. That is in addition to any sort of special recap or reunion type episodes, which may have been a different rate.

OK, let’s do some math… Assuming that the significant other of the convict gets the same pay rate, that is $6,000 per episode per couple. (Or $9,000 per trio, or just the $3,000 per episode for both Scott and Lizzie.) According to the initial WE tv press release about Life After Lockup, there will be eight one-hour episodes. Sharp has a propensity for leaving off a couple here and there during the season, so let’s just say that each couple will appear on seven episodes.

That would mean that couples like Clint and Tracie, Andrea and Lamar, and Marcelino and Brittany will be making $42,000 from Life After Lockup Season 1! Plus any extra from other special appearances. (PLEASE tell me they will be doing a Reunion!)

And remember, that is for a time period of less than six months. I assume that the film schedules varied from couple to couple, but from the pay stubs we have access to, it appears as though the first episode was completely edited back in late March. If you match that up with Marcelino revealing on Instagram live that he and Brittany just wrapped filming for the first season last week, then you’re looking at 4-5 months.

This latter part of the equation is purely fuzzy math, however. Some of the couples could have been filming for months before editing on the first episode was complete.

In summary, it seems as though these couples are on the cusp of making reality TV a genuine career. If the current season continues to gain viewers (how could it not?!) and WE tv does another season, then that will be more than enough for these couples to live off of — especially if you throw in some spare change from Cameo, clickbait partnerships, and the inevitable line of “Goddess” and “Motha***in’ CRACK” t-shirts and coffee mugs.

Love After Lockup: Life After Lockup airs Friday nights at 9/8 on WE tv. It really is one of the most entertaining reality shows on television right now, so I recommend to any reality TV fan to get caught up and get to watchin’!