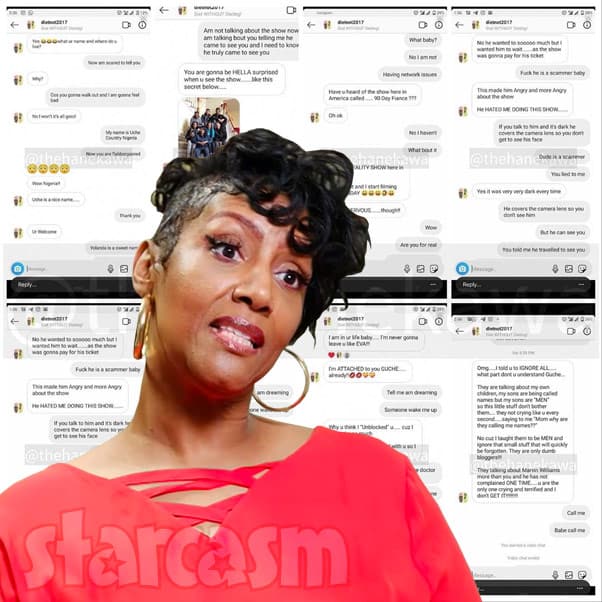 On the current season of 90 Day Fiance: Before the 90 Days, 51-year-old Yolanda from Las Vegas is preparing to fly to England to meet her online love interest Williams. Williams claims to be a 40-year-old restaurateur from Manchester with lots of sexy photos, some smooth talking DM fingers, a phone with a broken video camera, and a Nigerian accent. As viewers are well aware after two episodes, Yolanda (and her daughter) are slowly getting a bit suspicious about whether or not Williams is who he says he is.

As we have previously posted, it does appear that Yolanda is being catfished. The photos of Williams featured on the show are actually an Italian body builder named Michele Di Lucchio. I dug a little further into Yolanda’s social media accounts and discovered that the actual photos Williams sent her may have been a different guy who looked A LOT like Michele Di Lucchio.

While I was snooping around Yolanda’s social media accounts, I discovered some interactions in the comments section of her posts from last year that include exchanges with an Instagram account using the ID @marvins_wm. (Click the link for screen caps and a full recap.) Every indication is that this is Williams. Well, was Williams. The username has since changed to @nicesa__abu — which looks to be an account for the Civil Engineering Department at Ahmahdu Bello University (aka ABU) in Zaria, Kaduna State Nigeria.

In addition to woofully interacting with @marvins_wm, Yolanda also received a great deal of affection from @gucheofficial — another Nigerian account for a man named Uche (who also goes by Guche). Yolanda’s interactions with Uche escalated when she appeared to break things off with @marvins_wm.

Yolanda interacts with both accounts for a while, but eventually just shares her flirtations and PDA with @gucheofficial. The last instance I could find of her using the @marvins_wm tag was August 21. A week later, that account began posting as the ABU Civil Engineering Department.

I speculated that perhaps Williams was behind both accounts, and that he used the @gucheofficial account to come clean about misleading Yolanda. “Please note that this is entirely fan fiction on my part as I’m just trying to fill in the blanks with the most logical explanation,” I explained about the hypothesis.

Now Uche is speaking out and insists that he is not only not Williams, but he tried to warn Yolanda that Williams was scamming her! Uche shared a series of text messages between himself and Yolanda with The Fraudcast co-host @thehanekawa that appear to back up his claim. Here is the full gallery as posted by @thehanekawa:

First off. SPOILERS about Yolanda Keep scrolling if you don’t want. After discovering Yolanda's IG @ dietnot2017, and digging into some comments made on her posts…we speculated if "Williams" could be one of the two accounts doting over her images. Two men in particular stood out. Their IG handles @nicesa_abu (formally @marvins_wm) and @gucheofficial. @starcasmnet broke it down showing comments that have now since been deleted in a post on their website. But over the last 24 hours, Guche has contacted @FraudedbyTLC to get his name cleared! He claims he is NOT the one who is scamming Yolanda, and that he actually tried to save her from getting scammed by the other man Marvin Williams (@nicesa__abu)! As posted above in the pics, you can see screenshots of Yolanda talking with Guche about everything from her issues with Marvin (Williams), being lovey with Guche, and then lashing out at him when he confronted her about his name being drug through the mud as a scammer- something that he absolutely didn't want to have attached to his name.  Guche claims that since the discovery of his account in connection to possibly being the catfish, he has been close to losing his job and reputation.  The screen grabs show their odd relationship.  Sometimes Yolanda is doting back to him, and other times she's friend zoning him, and pulling him into the drama that she is having with "Williams". There are even messages about her blocking him for periods of times. Somehow this guys still wanted to be with her, and he ultimately ended up heartbroken as Yolanda shares her new “local” lover. @fraudedbytlc will be going live with Guche tonight to get more info! Stay tuned! . . . . . . . . #tlc #realitytvshow #90dayfiancetheotherway #90dayfiancebeforethe90days #90dayfiancepillowtalk #tlcnetwork #90dayfiancememes #realitytvmemes #tvshow #beforethe90days #trashtv #sitcoms #realitytv #reality #tv #90dayfiancehappilyeverafter #90dayfiancefanatics #90dayfiancé #90dayfiancefans #lakeju1 #chiomaassurance6 #90dayfiancebefore90days #90dayfiance #90dayfiancedrama #memequeen #drama #show #realitytvpodcast #tvshows #tlcmemes via @hashtagexpert

Here is an excerpt from the alleged conversations in which Uche tries to tell Yolanda about Williams being dishonest:

YOLANDA: No he wanted to sooooo much but I wanted him to wait……..as the show was gonna pay for his ticket

UCHE: F**k he is a scammer baby

YOLANDA: This made him Angry and more Angry about the show. He HATED ME DOING THIS SHOW……..

UCHE: If you talk to him and it’s dark he covers the camera lens so you don’t get to see his face.

UCHE: Dude is a scammer.

UCHE: You lied to me.

YOLANDA: Yes it was very very dark every time.

And here’s an exchange in which Yolanda expresses her affection for Uche and he talks about having a baby with her!

UCHE: Tell me am dreaming.

UCHE: Someone wake me up.

YOLANDA: Why u think I “Unblocked” u….. cuz I missed u so much. That’s why I video chatted with u so I could see ur face 💝💝

UCHE: Baby we gone have a baby the doctor will tell us what to do.

UCHE: Even if it requires adopting one.

UCHE: We gon train him or her together.

UCHE: Babe I want to spend the rest of my life with you.

UCHE: I wept when you blocked me.

After Yolanda’s interaction with Uche were re-posted online, and fans were speculating that perhaps he was actually Williams, he began to get some negative comments. He tried to talk to Yolanda about the things that were being said, but her previously affectionate tone had seemingly dissipated. Yolanda’s alleged response:

They are talking about my own children, my sons are being called names but my sons are “MEN” so this little stuff don’t bother them…. they not crying like u every second…..saying to me “Mom why are they calling me names??”

No cuz I taught them to be MEN and ignore that small stuff that will quickly be forgotten. They are only dumb bloggers!!!

They talking about Marvin Williams more than you and he has not complained ONE TIME…..u are the only one crying and terrified and I don’t GET IT!!!!!!!!!

Ouch! And just in case that wasn’t bad enough, Yolanda reportedly shared a photo of her new boo! From in or near Las Vegas! 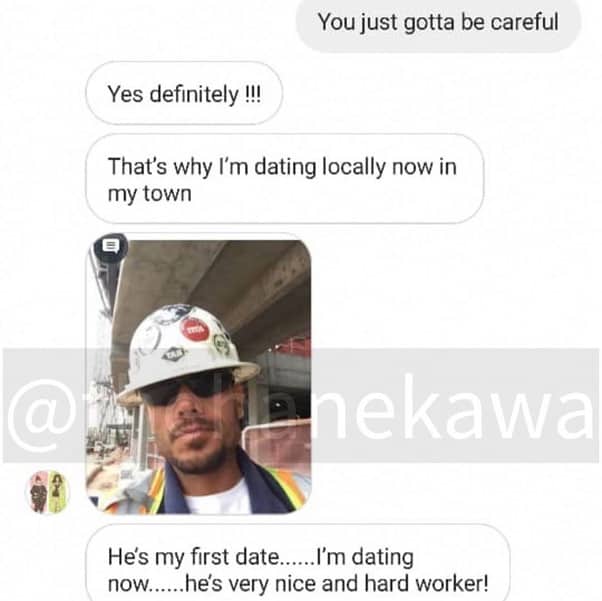 Uche is scheduled to talk with @fraudedbytlc on Instagram Live tonight at 8/7c. “I am ready to say all that I know and to clear my name of this mess Yolanda got me into,” Uche says. “I am not a scammer.” If there is any additional info of note, we will update this post.

Uche and @FraudedByTLC fill in some blanks, but there’s no bombshells in the interview. It is interesting to hear Uche talk about Yolanda’s motivation for doing the show, despite her family and the actual Williams catfish not wanting her too. The most important take away is that Uche INSISTS that he is not a scammer and that he was up front with Yolanda about who he was throughout their correspondence. That claim seems to be backed up by his public interactions with Yolanda on Instagram.

#BeforeThe90Days Yolanda said "it was a shock" when she & her children found out their dad Dwayne was arrested roughly 6 years ago, but Dwayne had a very extensive criminal history, including multiple headline-grabbing jewelry heist arrests. #90DayFiance https://t.co/Ko2qOCzw4x

BEFORE THE 90 DAYS Is Abby pregnant? She posts a positive pregnancy test on Instagram!