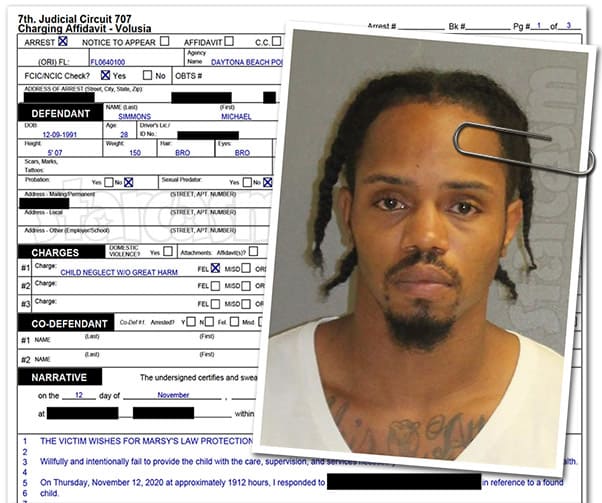 As we previously reported, Love After Lockup and Life After Lockup star Michael Simmons was arrested for felony neglect of a child late last week in Florida. We have since obtained a copy of the police report from the incident with details about what led to his arrest.

The very brief summary is that Michael was responsible for watching a young male child (the child’s age was redacted from the report) at a Daytona Beach hotel. Michael left for more than five hours, during which time a witness saw the unsupervised child “rotate from the beach to the pool deck, go into the ocean, pool and Jacuzzi alone, and play with another hotel guests’ child on the beach.”

The young boy eventually approached hotel staff and asked for food. When the hotel manager ascertained that the child was unsupervised, a call to 911 was placed. Michael later told police that he went to get the child “gummy snacks” and his car broke down. As a result, the child was left unsupervised at the hotel from roughly 2PM until roughly 7:15PM.

Here is a more detailed recap from the police report:

On Thursday, November 12, a Daytona Beach police officer responded to a 911 call reporting a found child at a local hotel. The call was made at approximately 7:12PM, and when the officer arrived there was already another officer on scene. Michael was also on scene, but he was not present when the other officer initially arrived.

The young boy was with the hotel manager prior to Michael returning to the hotel. The manager informed police that “he had come to work at approximately 1600 hours today, and was alerted by other staff members and guests at the hotel that [the boy] had been unsupervised for an extended amount of time.” The manager said the boy “approached the serving staff asking for food, due to him being hungry.”

The manager provided the boy with food and attempted to call a woman that I assume the boy had a phone number for. The woman told the hotel manager that Michael was supposed to be watching the boy. She didn’t know where Michael was, “nor could she come to get the child.” The hotel manager then called 911.

Police spoke with a witness who had a balcony room that overlooked the beach and pool deck area of the hotel.

Michael told the responding officer that he and the child arrived on the beach at approximately 10:00AM. Michael said that the boy “asked for gummy snacks.” Michael walked to his car and drove off, leaving the boy at the hotel.

The officer spoke with the young boy, who said that “he played on the beach, in the pool and the Jacuzzi for a few hours by himself, until it got dark.” The boy was afraid of the dark, and went inside the hotel at that point. The boy “got hungry waiting for [Michael] to return, so he asked a server at the hotel for food.”

The boy told the officer that “he was cold due to being wet and the temperature dropping outside.” The officer noted in the report that the boy “did not have a t-shirt or shoes” and was “wearing only basketball shorts and a hotel pool towel.”

The hotel has surveillance cameras, and the footage was to be be made available to police on Monday, November 16.

Due to the circumstances, [Michael] was taken into custody for child neglect. [Michael] was advised that the extended period of time that [the boy] was left unsupervised, along with the dangerous conditions in which he was left (multiple large bodies of water, unknown people, no food/water available), along with his decision not to have a suitable caretaker for [the boy] in his absence, all total out to child neglect.

Get the scoop on #LoveAfterLockup star Michael's arrest in December! https://t.co/LQbaPWbCrH

The boy was eventually handed over to the woman that the hotel manager had previously called. The police report indicates that the woman “responded to the scene in an unknown person’s vehicle, from an unknown location.”

The Florida Department of Children and Families was contacted, and an agent “advised they would be taking a report.”

It’s still unclear who the woman and child are, and what their relationship is to Michael. (His estranged wife Sarah stated on Instagram that “My kids were NOT involved!!!”)