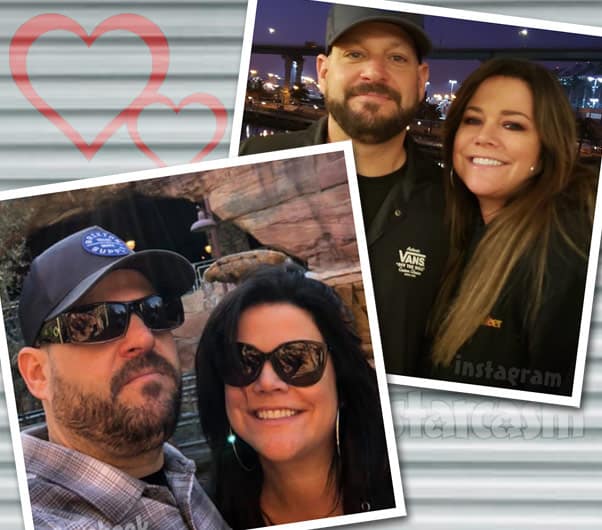 Storage Wars star Jarrod Schulz has confirmed his split from former fiancée and Married To The Job co-star Brandi Passante as he and his new girlfriend Rochel go public on social media.

Jarrod posted his first photo with Rochel Beckman on Facebook back in January (above left). Although you couldn’t tell from Jarrod’s trademark grumpy expression, the status for the captionless image says that he is “feeling happy at Disneyland with Rochel Beckman.”

Rochel has been a little more prolific posting photos of the two of them together, including numerous pictures on Instagram (above right).

As we previously reported, Jarrod and Brandi appeared to have split some time around February or March of last year — at least based on the photos of them together posted online.

So when did Jarrod and Rochel start dating? The earliest photo I could find of them together is from February of 2019. That certainly seems to line up with the best-guess timeline for Jarrod and Brandi’s split. Plus, Rochel’s last photo with her previous boyfriend was posted the month before.

Of course, photos of Jarrod and Rochel together are not any sort of smoking gun indicator that they were in a romantic relationship because the two of them work together. Rochel is a bartender at The Rush Bar and Grill in Lake Forest, California. Although I have not been able to confirm it, there is A LOT of evidence online suggesting that Jarrod is at least a part owner of The Rush.

In addition to a “Jarrod S” being listed as owner of the bar on Yelp, there is this funny Instagram exchange between Jarrod and his son Cameron after Jarrod shared a photo of the bar last march:

CAMERON: Should’ve bought me a car instead.

It’s unclear exactly when Jarrod and Rochel officially began dating, but it was obviously prior to last November when the couple took a cruise together to Hawaii!

If you’re curious about Rochel’s biographical details, she looks to be a single 42-year-old mother of three boys who look to be in their late teens to early 20s.

As far as Jarrod and Rochel’s relationship, it’s impossible to get a read from Jarrod (of course), but Rochel has shared numerous posts expressing a newfound joy in her life, which she often attributes to finding someone that treats her well.

Here is her New Year’s Eve caption for a gallery of Instagram images that includes Jarrod:

I want to say this last year has been my favorite year in a very long time. It’s crazy how much happier life can be when you are appreciated and cared for the way a person should be. Thank you so much to everyone that has been there to make this year the best, and being there for me no matter what. You all mean the world to me, and I’m excited to see what the next year brings. I love you all to pieces ! Xo

I’m a big fan of Jarrod and Brandi, and of course I’m bummed that the two are no longer together. That being said, I wish them both happiness as they move on. Jarrod has apparently moved right on to another relationship, while Brandi is THOROUGHLY enjoying the single life!

We will continue to keep an eye on Storage Wars‘ First couple, and we’ll be sure to update with any major developments like an engagement or a new boyfriend for Brandi. Stay tuned!

UPDATE – Brandi talks about her dating life after breaking up with Jarrod in the article linked below:

#StorageWars Brandi Passante talks about her dating life a little more than two years after her split from long-time partner Jarrod Schulz. https://t.co/VbVAqpSAmx

Until then, I will leave you with my favorite photo of Rochel and Jarrod from December of 2019. I opted for some very serious cropping, but it’s still worth it to see Jarrod sporting his Christmas Vacation sweater: