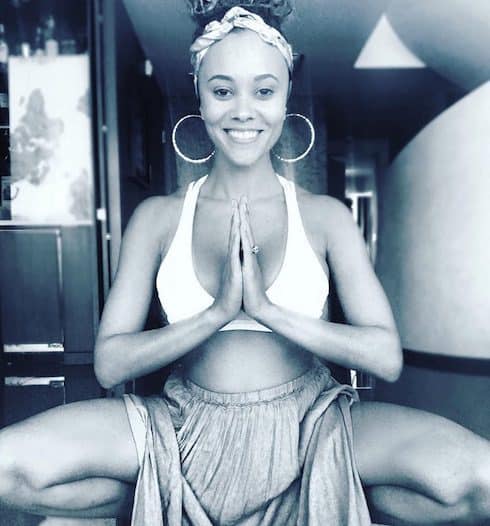 Ashley Darby just sprang a huge surprise announcement: she’s expecting her first child with husband Michael Darby! The Real Housewives of Potomac star shared the news on Instagram via a sweet film of herself and Michael glowing and looking positively elated by the news.

She also shared the first confirmed Ashley Darby pregnant details via a People exclusive, which we’ll get to shortly. First, though, the video:

Very excited to share this special news with you my loves. Michael and I are thrilled to welcome a bundle of joy into our lives. The most incredible gift imaginable! Love and light to you. Please check out our chat with @people ♥️// ?: @dexdelfin #RHOP #babydarby #ashleydarby

The news is a welcome change of pace for both Ashley and Michael, who’ve been dealing with the after-effects of his dismissed sexual harassment lawsuit, which will feature as part of their storyline for Real Housewives of Potomac Season 4. (Click here for our RHOP new season preview, including an early look at which cast members will be returning.)

So — first up is the obvious question. When is Ashley Darby’s due date? According to the aforementioned People feature, Ashley and Michael found out she was pregnant in “early November.” The couple hadn’t been trying to conceive, and were actually still working through the grief of Ashley’s miscarriage last year.

“I had just been healing out of it,” Ashley explained, “and I thought I was getting sick because of the change of season. I wasn’t feeling too well. Something just told me to take the test, really not expecting a positive result. And then lo and behold, there were two solid lines.”

The feature later confirms that Ashley is currently five months pregnant. Given that information, it looks like she and Michael will welcome their first child into the world in the summer of 2019 — presumably sometime in June or early July, not long after their fifth wedding anniversary 🙂

Though Ashley has been a stepmother to Michael’s two children since she and Michael were wed — the 59-year-old has a 27- and 24-year-old from an earlier marriage — the 30-year-old Darby says she’s understandably “excited” for a baby.

“When I used to hear people talk about having a child and the miracle of life inside you…” Ashley said. “I know that sounds great, but then to actually experience it? It’s the most all-encompassing feeling ever. I never imagined I’d feel this much love… it’s the pinnacle!”

Other tidbits of note: Ashley and Michael do know their baby’s gender, and may have a gender reveal party, but are undecided and feel no pressure to announce before she gives birth. They also don’t have names picked out yet, though Michael wants “something very regal.”

And, most tellingly, Ashley hadn’t shared the news with her RHOP castmates before telling the rest of the world. Just remember that detail when we inevitably get a huge shocked reaction from the cast at the filming of the equally inevitable gender reveal party later this year 😉

However, Ashley added she did break the news to Andy Cohen during a quiet moment at his baby shower last month. It sounds like their conversation was extremely sweet and loving and the kind of thing you’d just about give a limb to be able to overhear for gossip purposes:

Being at Andy’s baby shower a couple weeks ago, he and I were talking about it and to feel that mutual excitement was like a common bond we shared with each other. Sharing my experiences of becoming a mom, there was like this synergy we have with each other. It was really nice.

There’s one other bit of Ashley Darby pregnancy gossip that we should point out. Ashley shared the photo at the top of this article on Instagram on January 21st, using it to promote a then-upcoming yoga class. At the time, there was a little bit of chatter that she seemed to be sporting a bit of a tummy — maybe even a baby bump. Well, if you do click on the link and read People‘s article, you’ll see that their accompanying photo features Ashley in the exact same outfit and standing in the exact same room as in the black and white photo above. So it turns out that the pregnancy chatter was actually correct!

Bravo has yet to drop a trailer or share an official premiere date for Real Housewives of Potomac Season 4. However, the current gossip is that the show will return sometime in March 2019, not long after Real Housewives of New York‘s Season 11 premiere.