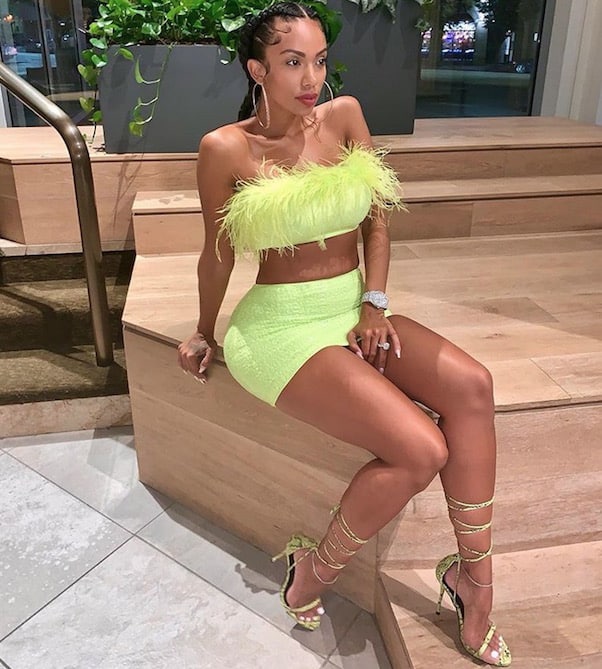 There’s been talk of Erica and Safaree pregnant for months — but are these latest pics finally proof of a child on the way? Not too long after Erica Mena acknowledged she and her reconciled fiancé Safaree Samuels have been “trying to have a baby,” Erica was spotted with what looked like a baby bump while out and about with her man.

Of course, further fueling the speculation in this case is the couple’s near-breakup just a few weeks back. At the end of June, Safaree made a very public (and very unexpected) apology to Erica, after Safaree’s ex Gabrielle Davis shared a string of DMs she said was between her and Safaree — and in which Safaree apparently claimed he really wanted to be with Gabrielle. The relatively quick reconciliation — fueled in part by the new car Safaree bought Erica, who doesn’t have a driver’s license — has at least a few fans wondering about Erica and Safaree pregnant in order to distract from the drama.

In any case, it was one photo in particular that got the gossip rolling again. Here it is — do you think Erica’s just pulled a Blac Chyna and had a little too much to eat before going on a public stroll, or is she sporting an early baby bump?

Our stomping grounds 💸 my fit: @ohpolly

This is hardly the first time that talk of Erica and Safaree pregnant has reached a fever pitch. This past winter, and shortly after Safaree’s Christmas Eve wedding proposal, Erica was said to be with his child. The belief at the time was that she would reveal her pregnancy on the upcoming season of Love & Hip Hop Atlanta.

Plus, as Atlanta Black Star pointed out, Erica revealed during a conversation with a friend on Instagram live that she was actively trying to get pregnant by Safaree:

[Erica] said she’d been using sea moss — a supposed age-old Caribbean fertility concoction for couples trying to have a child — during her stay in the Caribbean to help with conception.

“I’ve had sea moss,” Mena said to her friend at the time. “‘Cause you know we’re trying to have a baby, so we’re putting it inside our drinks and stuff.”

So, regardless of whether Erica Mena is actually pregnant right now, it seems likely that we’ll hear about her and Safaree’s first baby together in the not-too-distant future.