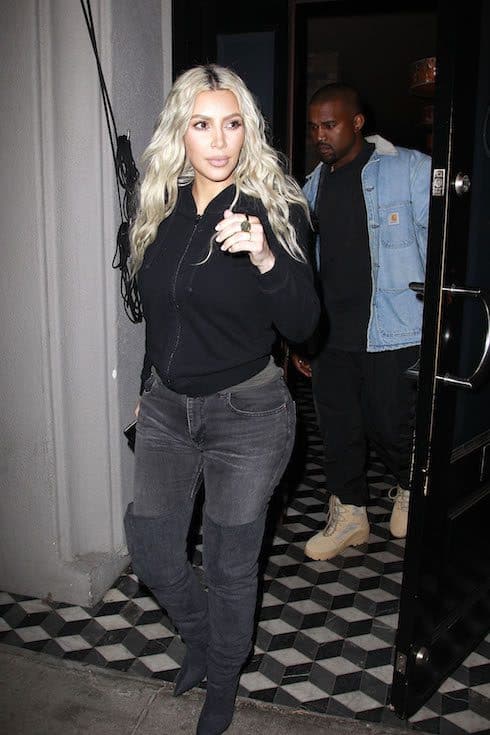 Kanye West and Kim Kardashian are said to be on the verge of a divorce in light of his recent “embarrassing” behavior and apparently careless ways. The Kim and Kanye split is reportedly the only way to relieve what’s become a major “family crisis” that began with the pair’s disagreement over Kanye’s head-scratching return to social media earlier this year, then worsened following his controversial political comments a few weeks ago.

Kanye, who claims he’s going to release five albums this year, first raised eyebrows when he returned to Instagram this past Valentine’s Day, posting a string of since-deleted pics that many fans took to mean Kanye not-so-secretly wanted a divorce.

After that, Kanye caused an outcry among his millions of fans and social media followers by voicing his support for Donald Trump, snapping selfies with conservative commentators of some note, and claiming that slavery was a choice for Africans brought to America in chains. (He also used Twitter to self-publish Break the Simulation, his self-proclaimed philosophy book, though in truth it didn’t sound any different from Kanye’s usual tweets.)

But Kanye’s ongoing public drama is apparently nothing compared to what’s happening in his private life — and a new article claims that Kim wants out. Life and Style is the latest to report on the alleged Kim and Kanye split, saying that Kim is “just so mad at [Kanye] for embarrassing her — and her family — over and over again.” (It could also be that Kanye apparently refuses to change diapers.)

Kim and Kanye have been fighting “bitterly” over his public outbursts, says the L&S insider, who explains “Kanye was furious that she would even try to silence him” and adds that the pair’s marriage is “in free fall.”

Compounding the problem is the suggestion that Kanye’s rant involving his claims about slavery got “rapper Daz Dillinger [urging] the notorious Crips gang to ‘f*ck Kanye up.'” The two have had to “beef up security” since then, and are taking the threat “very seriously.” But, per their insider, “It’s time for Kim to not only distance herself from Kanye, but to make it official and divorce him.”

Overall, the article paints a picture of a “family crisis” brought on by what sounds like exceptionally high stress levels, potential threats of physical violence, and the unbelievable temperatures coming off of Kanye’s hot takes. Fair enough. But People decided to go in a completely different direction, claiming that Kim has “happily joined Kanye in Jackson Hole” for a few days of relaxation while Kanye finishes up the first of his five planned 2018 releases.

Kim “wants to be supportive so he can finish his album,” said People‘s source, adding “The album has caused Kanye a lot of stress. He is a perfectionist and wants the music to be amazing.”

In addition, a new Billboard article sheds a bit more light on Kanye’s Wyoming digs. The 40-year-old has apparently “bought out some time at a lavish resort” specifically for “Yeezy, his family and collaborators to construct a safe space.”

The hotel had closed its doors for the off-season but agreed to a deal with Kanye and his crew because he’s been one of their most “loyal and high-profile” guests over time. The report also says Ye is holding down a luxurious suite that usually goes for around $5,000 a night.

Pablo will be hard at work with a few special visitors at his side while putting finishing touches on the five albums he’s said to be working on. The stream of G.O.O.D. Music releases begins with King Push on May 25, Kanye’s solo project slated for June 1, followed up by his collaborative effort with Kid Cudi for Kids See Ghost on June 8, the highly anticipated Nas album he’s producing that will drop on June 15, and Teyana Taylor’s much-delayed project will finally come to light on June 22.

Would anyone honestly be surprised by a Kim and Kanye split at this point? There’s probably been at least one semi-believable article on their pending divorce every week since they got married. In light of Kanye’s ongoing antics this year — which, when you boil them right down, amount to a terrific PR stunt in service of a product that doesn’t exist — the bigger surprise will be if he actually puts out each of his five promised albums, let alone an album a week every Friday from the end of May through the end of June.