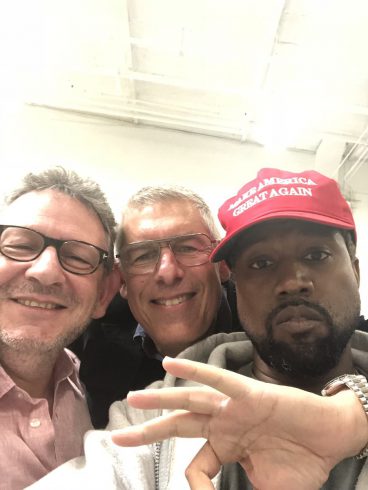 Kanye West has ignited a pop culture and political firestorm over the past few days. His Twitter feed has been the main source of Kanye Drama, but there are also rumors, reports, and professional moves that have everyone scratching their heads. It’s honestly pretty hard to “Keep Up with Kanye” these days.

Even his wife, Kim Kardashian, seems to be finding it a bit difficult to keep tabs on her very outspoken husband. She’s insisted that his recent behavior is not a sign of mental health distress, as many have speculated, but simply his natural personality, because he’s not depressed right now. (Of course, this whirlwind of dizzying activity does bring the word “mania” to mind for many of us self-appointed Internet Psychiatrists.)

In her tweets defending Kanye, Kim describes her husband as a free thinker who’s simply ahead of his time:

He’s a free thinker, is that not allowed in America? Because some of his ideas differ from yours you have to throw in the mental health card? That’s just not fair. He’s actually out of the sunken place when he’s being himself which is very expressive

Kanye has inspired controversy by becoming very open about his support of President Trump and even laying down plans to run for office soon, presumably on a Republican ticket. This crossed a line for some of Kanye’s many supporters and friends, though it’s also making Kanye very attractive to a whole new side of Americans: those who voted for and support Donald Trump.

Just today, Kanye tweeted screenshots of a private text message exchange between himself and John Legend, in which John questioned whether Kanye really wants to align himself with Trump. John pointed out that one potential reason not to do so is that many people who love and support Kanye may feel betrayed by his political realignment. (Speaking of which, it could also be considered a betrayal to blast private discourse on a public forum.)

Kanye replied that he loved John, but that “bringing up my fans or my legacy is a tactic based on fear to manipulate my free thought.”

Kanye’s never really been shy about outspoken unpopular opinions or his inflated view of himself. That said, it seemed odd and grandiose even by Kanye’s standards when he started talking about running for president…until Donald Trump, a former reality star with decades of tabloid fame under his belt, won America’s highest office in 2016. In the wake of Trump’s run, Kanye’s presidential talk seems less empty and less unlikely.

But Kanye’s newly divisive politics aren’t the only thing that has some people concerned. He also recently cut ties with his manager, Scooter Braun. The reason? It’s still not clear: “I no longer have a manger,” Kanye simply tweeted. “I can’t be managed.”

Today, Kanye tweeted the New Yorker cartoon that was the source of the line. He also shared about a billion more cartoons on the social media site:

All of this could just be a marketing ploy. Kanye says he has a new album — or five, if you take him at his word — coming out soon. And Kim just launched a new fragrance in a perfume bottle that looks so much like her naked body we’re reluctant to post a photo of it.

Then again, the launch of Kim’s provocative perfume could be more of a deflection from Kanye’s antics than a marketing strategy of her own.

Still, it sure seems like there’s something more going on with Kanye. The combination mental health struggles, an abundance of talent and creativity, and an overabundance of both money and power with it can really mess with a person’s head. Hopefully, Kanye takes some time to take care of Kanye in the midst of all these big plans and ideas.

Mental Health is no joke and the media needs to stop spitting that out so casually. Bottom line