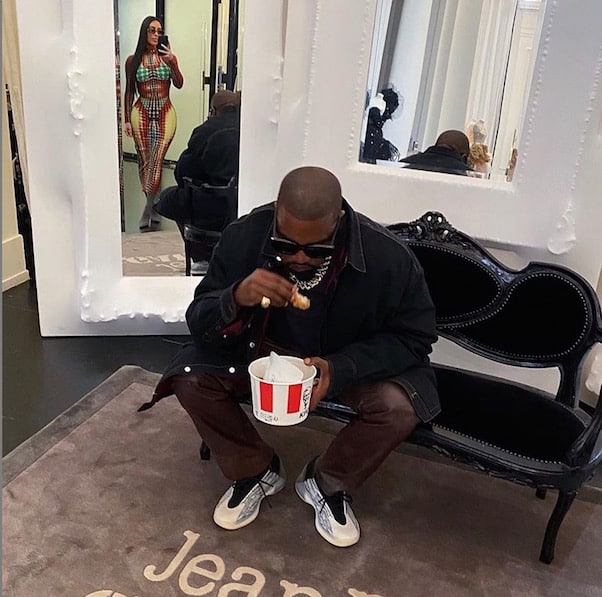 Kanye West’s unpredictable behavior is nothing new, but it might be having a new and potentially damaging effect on his marriage to Kim Kardashian. Kim is reportedly ‘stressed’ over Kanye’s latest outbursts — including Kanye’s supposed presidential ambition — and it seems that whispers of a trial separation may be starting back up. So, are Kim and Kanye still together? Or are they still in the perpetual gossip state of potentially broken up?

The newest report on Kanye comes via The Jasmine Brand, who says their anonymous insider can confirm Kanye is “struggling” through a bout of mania. It’s not clear what the insider’s medical qualifications are, but all public evidence would seem to indicate that Kanye is leaning more toward the manic end of the bipolar disorder he first disclosed a little over a year ago. In the past eight days, Kanye has announced he’s running for president this year and finally unveiled those Star Wars-inspired housing projects.

In addition, Kanye gave a gave an interview to Forbes in which he declared his political party is the “Birthday Party”; admitted he’s never voted in his life; denounced Donald Trump and simultaneously said he’s “okay with siphoning off Black votes from the Democratic nominee”; claimed he’s already had COVID-19 and doesn’t trust vaccines; came out as anti-abortion; and said he wants his presidential administration to be organized just like Wakanda. (And let’s not even get into Kanye’s billionaire beef with Forbes from just a few weeks ago.)

Back to Kim: TJB reports that Kim is “concerned” enough to be hanging back in Calabasas with her and Kanye’s four kids while Kanye works on the couple’s property in Wyoming. “It’s super stressful for Kim,” their source says, “because Kanye’s behavior is very unpredictable….The [bipolar] episodes usually last for a few weeks and then things go back to normal. Kim hopes it will be the same this time.”

But are Kim and Kanye still together, or is this the beginning of the end? Well, if the above quote is legit, that…doesn’t necessarily sound like a “concerned” spouse? You’d think Kim would either want to bring Kanye back to LA or take the family out to Wyoming to be with him. She could just as easily be giving Kanye space to a) finish up one of the four other albums he said he was working on alongside Jesus Is King, b) let his presidential dreams peter out, or c) both.

If Kim really does “[hope]…things go back to normal” after just a few weeks, then it sounds more like that’s what her plan is for Kanye. Or this could just be the latest phase of the rumored trial separation the couple was said to be considering back in May, just before their sixth anniversary. The causes were the same back then: a stressed Kim stuggling to “keep up” with Kanye; the “cracks” in their marriage opening up again; the amount of time the two apparently already spend apart.

That rumor was never really debunked, because there’s no way to know for sure whether Kim and Kanye are still together. They could be “separated” for years, spending just enough time together to pose for social media pics and splitting the rest of their time at their assorted properties & favorite vacation spots, and no one would ever be the wiser. There’s no doubt being married to Kanye West is stressful; there’s also no doubt that to whatever extent money can buy you peace of mind, Kim long ago purchased her share.

(Photo credit: Are Kim and Kanye still together via Instagram)