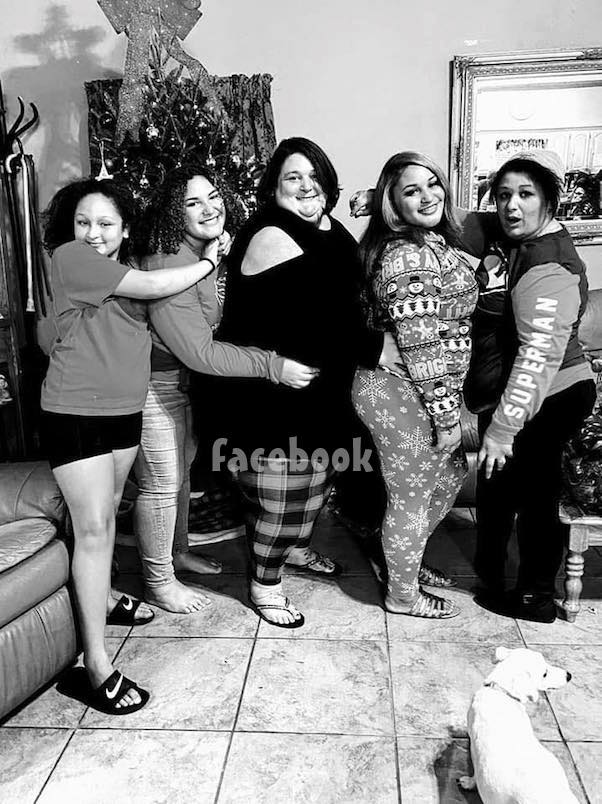 My 600 Lb Life Season 8 star Coliesa McMillian’s death came after a months-long battle with an assortment of ailments and post-surgery complications. Coliesa had been hospitalized several times over the past year — she actually missed her My 600 Lb Life debut due to a medically induced coma this past March — though each time she battled back. But what was the Coliesa McMillian cause of death? And why have there been such conflicting reports on the cause?

As we reported this past spring, Coliesa had to be hospitalized for almost a month. First, a suture from a previous surgery popped, which led to a life-and-death fight with sepsis. Coliesa actually flatlined in the emergency room while doctors struggled to help her.

After a multi-week battle, Coliesa’s daughter Hannah wrote that her mother’s condition had improved. “My mom is okayy!!!!!” Hannah said, adding, “my awesome god !!!! He pulled her thru this and she is a fighter omg ????”

Unfortunately, Coliesa’s victory was short-lived. She had to be readmitted to the hospital this past August and wouldn’t make it back out. Coliesa died on September 22nd. She is the eighth My 600 Lb Life cast member to have passed away.

But there have been conflicting reports about the exact Coliesa McMillian cause of death. None of the news reports of Coliesa’s passing describe what killed her. The closest anything comes is the current edit of the Wikipedia article on My 600 Lb Life, which lists “acute kidney failure and other complications.” But the TMZ article linked as the source for that claim mentions neither kidney failure nor any specific complications about Coliesa’s case.

Coliesa’s family explained her cause of death in more detail

The first explanation of the Coliesa McMillian cause of death came, unsurprisingly, from those closest to her. The family members currently running Coliesa’s official Facebook fan page gave a simplified explanation of the cause shortly after announcing the death itself. “Coliesa Kay Lee,” they wrote, “had health problems from her surgery and it just ended her life”

And the first detailed explanation came from Coliesa’s niece, Blair Shelton, herself a nurse and the person who first broke the news of Coliesa’s March hospitalization. According to Blair, the complications from Coliesa’s gastric sleeve surgery simply became too numerous to bear.

Here’s Blair’s message to a My 600 Lb Life fan group on social media, followed by a transcription: 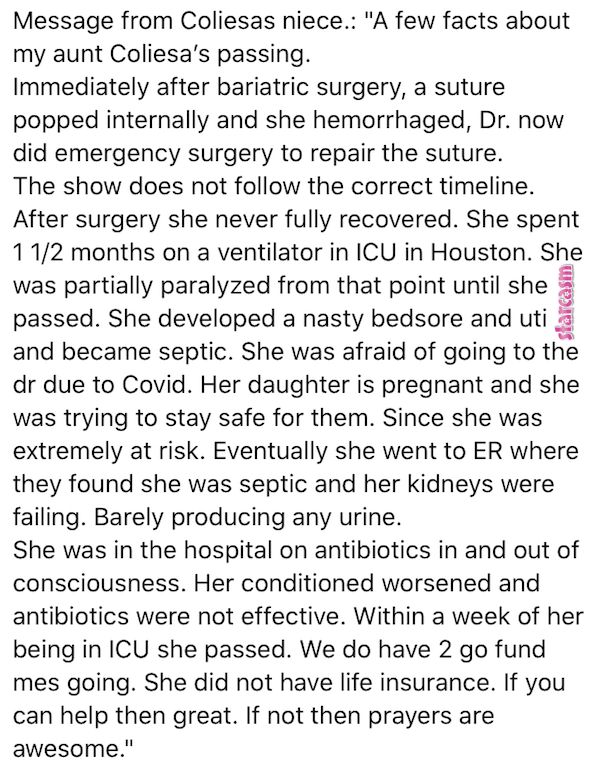 A few facts about my aunt Coliesa’s passing.

Immediately after bariatric surgery, a suture popped internally and she hemmoraged, Dr. now did emergency surgery to repair the suture.

After surgery she never fully recovered. She spent 1 1/2 months on a ventilator in ICU in Houston. She was partially paralyzed from that point until she passed. She developed a nasty bedsore and uti and became septic. She was afraid of going to the dr due to Covid. Her daughter is pregnant and she was trying to stay safe for them. Since she was extremely at risk. Eventually she went to ER where they found she was septic and her kidneys were failing. Barely producing any urine.

[Coliesa] was in the hospital on antibiotics in and out of consciousness. Her condition worsened and antibiotics were not effective. Within a week of her being in ICU she passed. We do have 2 go fund mes going. She did not have life insurance. If you can help then great. If not prayers are awesome.

Based on Blair’s description, it sounds like Coliesa’s final months were far more painful and difficult than anyone outside of her family had realized.

(Photo credit: Coliesa McMillian cause of death via Facebook)