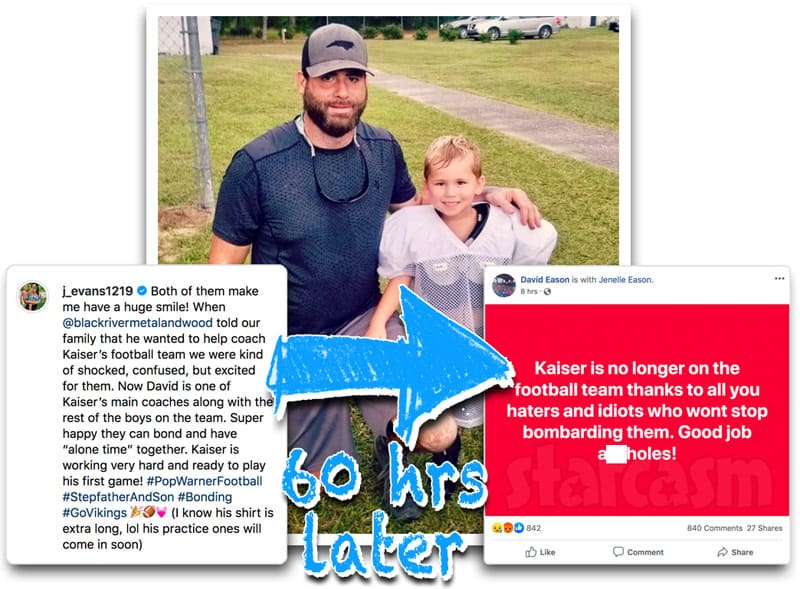 Former Teen Mom 2 star Jenelle Eason and husband David Eason still seem to be completely oblivious to how his words and actions over the past couple years have created the perception that he is unstable and dangerous. Even after the Secret Service sent a representative to The Land to make sure David wasn’t a threat to the President of the United States, and Investigation Discovery included David on a list of five of the most terrifying dads alongside murderers and rapists, the two continue to be shocked whenever there is a public backlash against them.

The latest incident comes after Jenelle shared a photo of her son Kaiser sporting football pads and a jersey alongside David. In the caption, Jenelle revealed that Kaiser is playing on a Pop Warner football team and she claimed that “David is one of Kaiser’s main coaches.”

Both of them make me have a huge smile! When @blackrivermetalandwood told our family that he wanted to help coach Kaiser’s football team we were kind of shocked, confused, but excited for them. Now David is one of Kaiser’s main coaches along with the rest of the boys on the team. Super happy they can bond and have “alone time” together. Kaiser is working very hard and ready to play his first game! #PopWarnerFootball #StepfatherAndSon #Bonding #GoVikings ??? (I know his shirt is extra long, lol his practice ones will come in soon)

The idea of David being a coach for a Pop Warner football team had a lot of folks concerned, and apparently the local organization was inundated with inquiries about David’s involvement. Although there has been no official statement issued by the local league, numerous online accounts have posted interactions with those involved who have stated that David was not officially a coach for Kaiser’s team.

Unfortunately for Kaiser, Jenelle’s post and the resulting backlash resulted in David and Jenelle removing him from the the team. “Kaiser is no longer on the football team thanks to all you haters and idiots who won’t stop bombarding them,” David announced on Facebook earlier today. “Good job assh*les!” he concluded.

David’s post inspired an article by The Hollywood Gossip’s Tyler Johnson, a writer that Jenelle has lashed out at numerous times on social media because of his negative coverage of the Easons. (This article is no exception.)

Jenelle’s resentment towards Tyler didn’t prevent her Facebook account from sharing a paid link to the article, however.

Jenelle’s sponsored post is important because the link and the article were both titled: “David Eason to Critics: You A-Holes Got Kaiser Kicked Off the Football Team!” This caused some confusion as folks openly wondered why Kaiser would have been removed from the team. 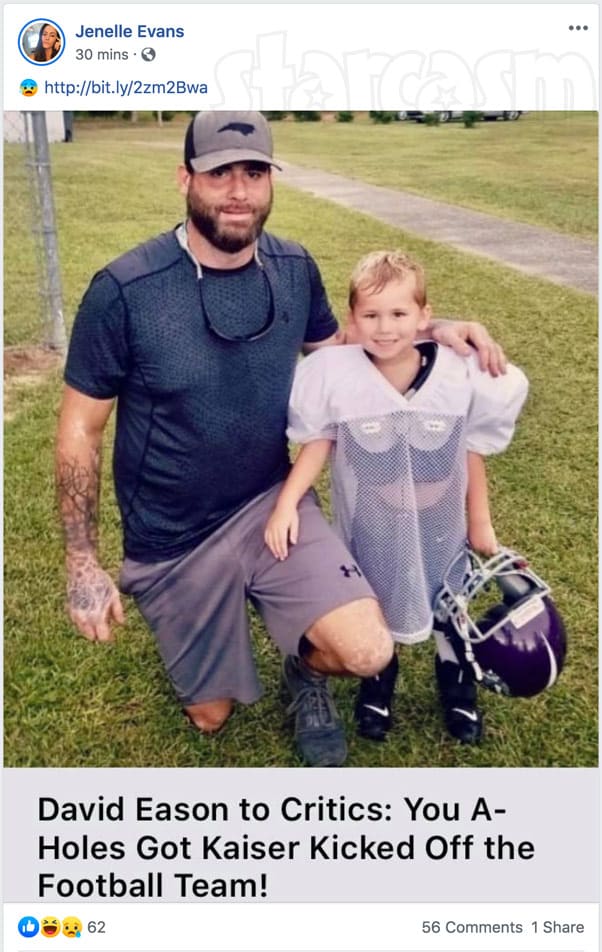 David and Jenelle would later explain that Kaiser was not kicked off the team, but they chose to remove him. Jenelle seemed frustrated over the confusion about his being kicked off, despite the fact that she shared a post that stated exactly that.

From the comments section of David’s announcement:

COMMENT: J & D pulled kaiser, I’m sure they kaiser was not kicked off the team and I’m POSITIVE the team organization would confirm this.

JENELLE: We did pull him out … no one said he was “kicked” off.

COMMENT: So Kaiser could play but again because David can’t you’re entire family will suffer just like they did when he couldn’t be filmed and you could……

JENELLE: No… due to harassment from haters online to the organization. It’s not safe for kaiser to be there with so many crazy people out there.

David also posted a couple responses in the comments section, including one in which he seems to reveal that he applied to be a coach, but was rejected after they did a background check. Unfortunately, I do not have the original comment, but here is David’s response: 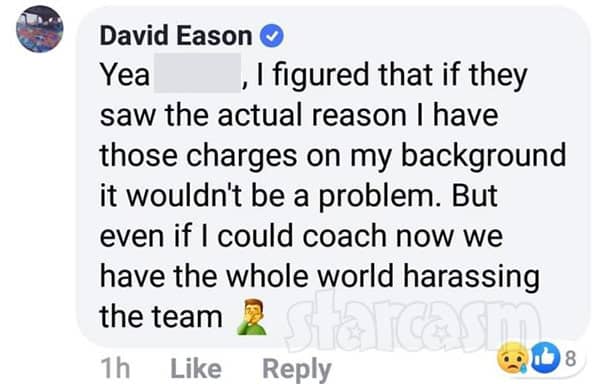 And another response from David:

COMMENT: I’m sorry but y’all have to know there’s consequences to the actions you have made. Best of wishes for a turnaround..

DAVID: What actions Mary? Because I have a domestic violence charge from having a verbal argument? None of you people don’t know anything about me.

In other Eason backlash news… Jenelle just posted that her much talked about JE Cosmetics line will be launching earlier than expected with an online store opening on September 1:

Unfortunately, the announcement does not reveal the company’s new website address. In case you missed it, the cosmetics line’s original website url at jecosmeticsinc.com was bought out from under Jenelle and is now an animal rights awareness site in honor of her deceased French bulldog Nugget.

I assume that the planned JE Cosmetics launch event at an undisclosed location in New York City during Fashion Week is still a go. Here is our prediction of what that will look like:

We've got an exclusive sneak peek into the future at Jenelle's #JECosmetics launch in New York City next month! #TeenMom2 #Rakin pic.twitter.com/z9DUXJNc7g

The original event had to be moved after the location of the venue was “leaked” by Jenelle’s PR manager Johnny Donovan — according to Jenelle.

The hosting salon told a different story, however, as they announced they canceled the event after learning more about Jenelle and David. “Our salon was unaware of what her and her husband have done or have been connected to, and in no way, would we support such brutality,” Flirt Beauty Boutique said in a statement.

I will end this post with a couple of Facebook posts shared by Jenelle this week. In one, she blasts grandparents who only support “certain” grandkids. (I assume this screen cap will be extra valuable to hatters twenty years from now when Jenelle is a grandmother explaining why she refuses to have interactions with certain grandchildren.) In another, Jenelle shares a tweet and response that emphasize how important it is to remember to put your spouse above your children. 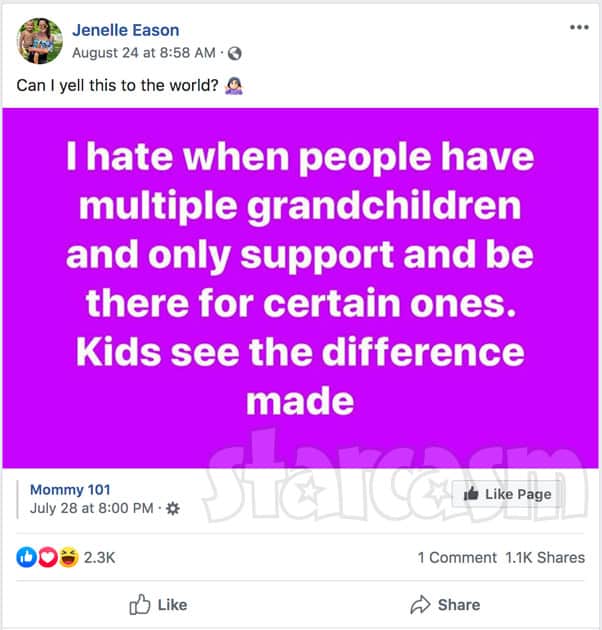 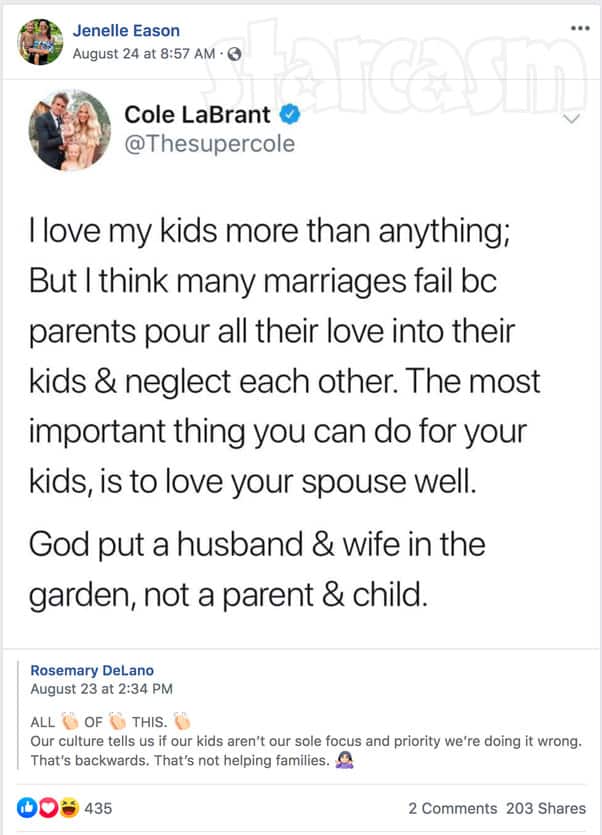