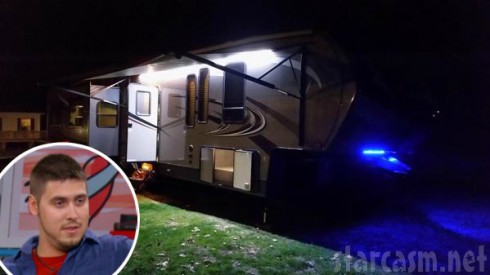 Jeremy Calvert may be working through his problems with wife Leah Calvert, but he just made a big purchase that will allow him some space if he wants…

“Home away from home,” Jeremy tweeted with the top picture of his new fifth-wheel camper on Wednesday, shortly after saying he was shopping for a new trailer at Summit RV in Ashland, Kentucky. Despite my best efforts, I couldn’t figure out the exact make and model of Jeremy’s fifth wheel based on the picture, but it looks something similar would run at least $30,000+. The high-end, new models cost upwards of $100,000.

With the ink barely dry on the bill of sale, Jeremy started making plans for a cross-country trip with his new sleeper: Teen Mom 2 costar/personal friend Javi Marroquin encouraged Jeremy to “slide through Delaware to hang out.” Then Randy Houska chimed in to tell both guys they should come out to South Dakota to partake in pheasant hunting season. Jeremy didn’t really participate in the conversation other than saying he was trying to fly “way under the radar,” but did retweet two of Randy’s messages.

Between the plans to get away and another recent tweet, it seems all still isn’t well between Jeremy and Leah…

Just about tired of keeping my mouth shut!

He also retweeted a message from a supporter who said that sucks, but advised Jeremy not to “say anything while you’re angry.” Meanwhile, Leah tweeted that today was a fairytale and seems to be focused on planning the twins’ birthday party for next month… “It’s complicated,” indeed.