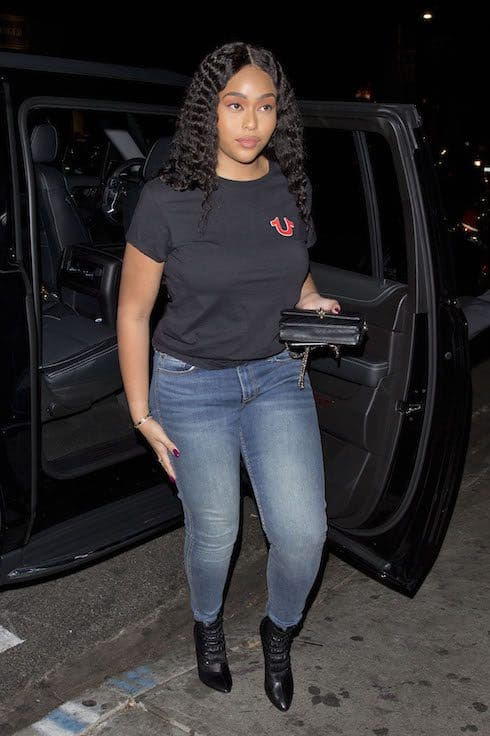 Kylie Jenner’s former BFF has been trying to reach out to the Kardashians to apologize, but it seems the family wants nothing more to do with Jordyn Woods. It’s been a full week since Jordyn’s widely reported hookup with Khloe Kardashian’s baby daddy Tristan Thompson, and Jordyn has reportedly been reaching out to every member of the Kardashian family who hasn’t blocked her or changed their number since then.

Jordyn is “completely remorseful,” according to the anonymous insider quoted in People‘s latest article on the fallout. She’s “been trying to reach out to Khloe, Kylie[,] and everyone else in the family to apologize,” and “wants to…make everything right.” If that’s true, Jordyn Woods needs to get a new PR person (unless Jordyn herself is the anonymous source). There’s no way any of the Kardashians are going to be returning Jordyn’s calls so soon after a huge, Miranda-Lambert-thunder-stealing event like this.

For the record, I’m not one of the conspiracy theorists who thinks the Kardashians themselves organized this thing with Jordyn and Tristan to drive up ratings for the Keeping Up With The Kardashians season premiere in a few weeks. The Kardashians are a billion-dollar fashion industry and have the biggest collective social media pull in the world. They don’t need their show, with its drain-circling ratings, any more than you need to eat the leftover Chinese food at the back of your fridge in order to survive the rest of today. If E! decided not to renew the show at the end of its current contract (which is up this year), the Kardashians won’t bat a Kylie Cosmetics-sponsored eyelash.

Having said that, it would be naïve to think that the family isn’t doing everything in its power to control the Jordyn Woods narrative. The longer they wait before making any kind of public response, no matter how small, the longer the attention is on them. Kylie is still following Jordyn on Instagram, for example, despite kicking Jordyn out of her guest house fast enough to make Blake Griffin blush. And Jordyn won’t do anything until Kylie does. She’s remorseful, not thirsty.

Speaking of thirsty, here’s James Kennedy from from Vanderpump Rules doing his best to buddy up alongside Khloe Kardashian in her time of need:

I got your back @khloekardashian !!! Repost! Xoxo #pumprules #kuwtk

Can you see how much I’m blushing ? Cause I can, love you @khloekardashian

Jordyn Woods turning in a resume at any restaurant seems…unlikely. Her biggest champion has deserted her, but Jordyn is still a working model with a huge Instagram following. And those 8.8 million people aren’t going to stop following her if Kylie does, or if Kylie tells them to. Most of them, anyway.