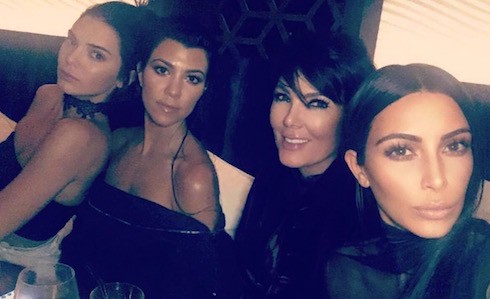 Apparently the Kardashians’ days on TV may be numbered. According to a new take at The Blemish, the show’s producers are in a tizzy because ratings are way, way down–like, Real Housewives of Potomac-level down. Despite the fact that the current episodes deal with Kim’s Paris robbery and the emotional fallout therefrom, only around 1.4 million people are tuning in this season on average, compared with over 2 million to this point last season.

“This sucks,” said the alleged unnamed source (could the same unnamed source be giving quotes for all the Kardashians’ tabloid stories?). “These were big episodes and they were supposed to bring in big numbers. This is bad.”

But don’t be too quick to celebrate. (“Too late!” -Everyone.) For starters, it’s not like the Kardashians even need their TV show to remain embedded in the public consciousness like a cyst under an eyelid. Every one of the family members is a marketing locus unto herself (plus Kanye), and the power of their huge social media followings won’t diminish in the slightest if Keeping Up With The Kardashians gets the ax. Kendall Jenner has become one of the highest-paid models in the world based largely on the fact that more people follow her on Instagram than voted for popular vote champion Hillary Clinton in the last presidential election. As of this moment, Kendall’s got 77.4 million followers. And she doesn’t even have the biggest following in her own family: both Kylie and Kim have more.

There’s also the matter of the $100 million contract the Kardashians signed with E! in early 2015. The four-year deal means the family will stay the face of the network through at least 2019. And it covers all spinoffs–which is handy, because Kris Jenner is reportedly pitching an animated version of KUWTK. The “primetime pitch” is reportedly “not for kids,” and is said to involve “the entire family,” minus Caitlyn. So, if you’ve ever thought that the Kardashians’ exploits seemed fun, but not cartoonish *enough*, your niche is about to be exploited Momager-style.