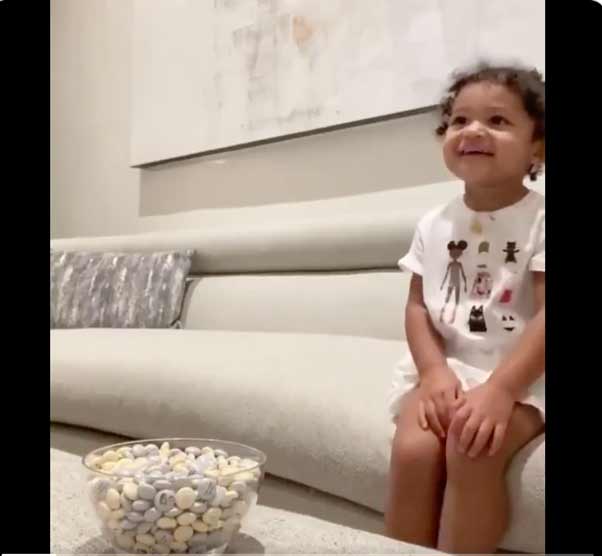 Two-year-old Stormi Webster has broken the Internet with her adorable ability to be patient in the face of chocolate. In an Instagram video posted on May 11, her mom Kylie Jenner (22,) put a bowl of M&Ms in front of Stormi and told the young girl she could eat three of them, but not until Kylie came back from the bathroom. She set up her phone to record Stormi to see if she obeyed instructions. “I’m going to put the chocolates right here, okay?” Kylie told Stormi, who was sitting on the couch in the Instagram video. Stormi replied with an enthusiastic “yeah!”

At first Stormi tried not to look at the enticing bowl of treats, but soon the temptation was almost too much and she lunged at the bowl. With her hands on both sides of it, she sang quietly to herself “Patience, patience, patience,” to stop herself from eating any until her mom came back. Anyone watching the video can feel the anticipation!

The clip only lasts a minute, but the pressure was so real. In what seemed like an eternity mom Kylie finally returned and asked Stormi if she waited. Stormi was able to triumphantly answer “Yup!”

With her patience paying off, Stormi exclaims “Wonderful about receiving her prize.

Stormi’s cute accomplishment even got her trending on Twitter last night, and the Twitter audience could barely contain their joy. This is truly an occasion to unironically use the term “uwu.”

All of Twitter after seeing the video of Stormi pic.twitter.com/M3rQIadFGG

This little challenge echoes the 1960s “Standford marshmallow experiment,” which tested a child’s ability to wait for a reward (a.k.a. delayed gratification.) In the experiment, children were left alone in a room with marshmallows but would be rewarded with even more marshmallows if they could resist the temptation to eat a marshmallow until the experiment conductor came back into the room. The study found that overall, children who were able to wait longer for a larger reward were more likely to achieve higher success later in life. They generally received higher SAT scores, lower levels of substance abuse, lower likelihood of obesity, better responses to stress, better social skills, etc.

Kylie Jenner splits with Tyga: “My father’s courage convinced me to stand up for myself”