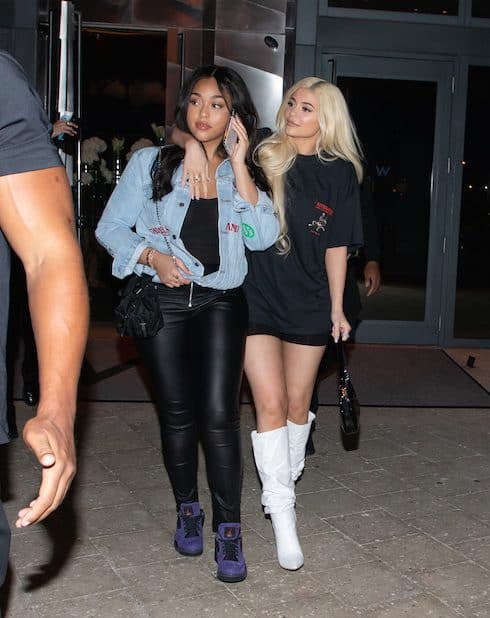 Yesterday the news of Tristan Thompson’s latest infidelity broke. It came from an unexpected place: rather than a hotel rendezvous with an Instagram glamour girl, Tristan chose Kylie Jenner’s BFF Jordyn Woods. It’s still not clear exactly what the two of them did; we’ve seen anonymous insiders alleging everything from hooking up to snuggling to making out and even just getting flirty. But it also doesn’t really matter, since whatever happened was enough for Khloe Kardashian to break up with her baby daddy. And now Jordyn Woods and Kylie Jenner are on the outs as well.

But one very important detail I somehow completely missed yesterday was the fact that Jordyn has actually been living at Kylie’s house for awhile. The 21-year-old Jordan, who owes let’s say around 97% of her eight-million Instagram followers to her friendship with and business ties to Kylie Jenner, for some reason decided to throw caution to the reckless wind and hook up with her best friend’s sister’s baby daddy in front of a bunch of people at a party. (Including, apparently and because why not, Drake.)

How did this go over with the rest of the Kardashians? Per the family’s home network, Kylie is “reeling” over the betrayal, Khloe is in “disbelief” and is “angry more than she is sad,” and the family as a whole is “writing Jordyn off.” Though E! does appear to leave some wiggle room about Jordyn Woods and Kylie Jenner specifically, noting that Kylie — who once got fake married to Jordyn for TV — is “very torn on how to handle the situation.”

Unless Jordyn has some exceptionally good tea on Kylie, I think it’s safe to say she’ll be sleeping on her mom’s couch for awhile. But the biggest question is probably whether Jordyn expected such swift and merciless blowback. As Celebitchy pointed out, Jordyn has had “a front-row seat to witness Khloe and Tristan’s dysfunctional relationship,” and was probably thinking ‘What will it hurt, [Tristan and Khloe] are barely even together at this point.'” Plus, she’s 21. How much forethought does she employ?