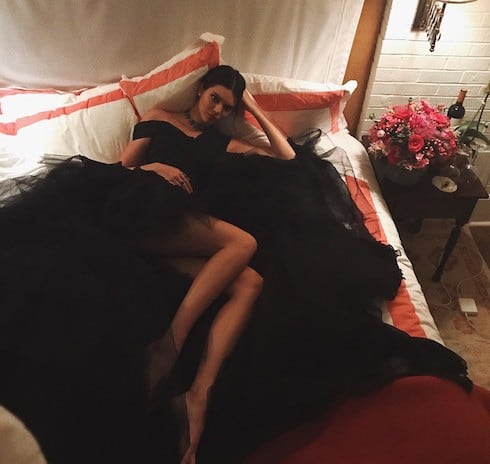 Kendall Jenner, the Kardashian who normally works the hardest to avoid tabloid drama, is saved from bigger headlines this week only by a pair of unexpected family babies. Her quiet relationship with NBA All-Star Blake Griffin has morphed from casual dinners to casual dinners in clearly post-coital sweatpants to cross-country Fashion Week visits, and the tragic twisting in the wind of A$AP Rocky, Kendall’s erstwhile boyfriend the whole time.

But is Kendall Jenner with Blake Griffin, or is the whole thing just a friendship as insiders have maintained? Because, yesterday, this happened:

we caught @blakegriffin32 baby mama moving out of their house today… #KendallJenner is officially a home wrecker! https://t.co/r1kroXBrvq pic.twitter.com/hgjplhH3DI

According to X17, the word is that Blake and Brynn Cameron–with whom Blake has two children–”reportedly called it quits in July.” However, speculation is rampant that “hot hookup” between Kendall and Blake is what actually led to Brynn calling things quits with Blake and moving “tons of clothing and children’s toys into waiting trucks.”

Both Brynn and Blake have been staying at rented places since their breakup happened. It seemed like they wanted to give it time for the dust to settle before disrupting the kids with a big move. That said, Brynn feels totally betrayed and mortified that Blake has chosen to be so public with Kendall, and she just wants this whole mess to be over. He’s in Clippers training camp now, so she figured it was the perfect time to do it.

So, to sum up: Brynn thought it would be best for herself and her children if she moved them into a new home while Blake was out of the house for training camp (FYI: the Clippers are holding camp in Hawaii) but well after the school year had already started. The first rumors about Kendall and Blake getting together didn’t break until early August; even assuming that they weren’t enough to precipitate a split, there actually would have been *more* time for Brynn and the kids to split if Brynn and Blake’s relationship did indeed end in July.

The whole thing sounds a bit fishy either way. Adding to the stench The Blast’s take, which alleges that “the parents were still in a relationship and happily living together until recently when Griffin made it very clear he had moved on.” Either way, Kendall picked the right week for family pregnancies to be revealed.

(Photo credits: Is Kendall Jenner with Blake Griffin via Instagram)