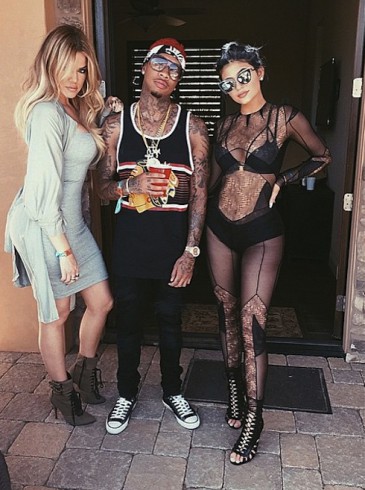 Is Kylie Jenner engaged? Apparently, she and Tyga are in love with each other–and with the drama of keeping relationship secrets.

They’ve had a choppy few weeks. First, Kylie stood up to Tyga and broke things off with him after he sexted with former flame Blac Chyna. Then, Tyga managed to win KJ back, thanks in part to a romantic picnic and private stroll through the picturesque gardens of Cal State-Fullerton.

Then, Tyga praised Kylie for her levelheadedness and “maturity,” and came under widespread criticism because Kylie’s family has begun to question Tyga’s negative influence on the 17-year-old PacSun sales rep.

Now, the couple is reportedly engaged to be married at the end of the summer. Friends of both Kylie and Tyga say the 25-year-old popped the question as soon as he was back with the youngest Jenner. Kylie has told a few trusted family members, but no one else:

[Kylie] told her friends that Tyga gave her a ‘symbolic ring’ for now and she isn’t showing anyone until her birthday, when she’ll make an [official] announcement. They’re tired of hiding….The next way Tyga wants to prove his love to Kylie is by having a baby with her….He wants to put a baby in her in a year or so, and is completely down with having an accident happen in the future. He’s all about it!

The Jenners do have a history of keeping major announcements secret until the timing coincides favorably with their television schedule.

As for that whole “waiting for Kylie’s birthday”-slash-“put a baby in her in a year or so,” the couple is waiting at least three months to do something high-profile because of Tyga’s super-secret, super-real concerns over Kylie’s age. He’s said repeatedly that he doesn’t care about how young she is, going so far as to say “f*ck the law” when it comes to statutory rape in California.

(Despite widespread claims to the contrary, the age of consent in California is 18, and not 17 or 16.)

But Tyga also doesn’t want to take any chances. Kylie turns 18 on August 10, which means there might be fewer than three months until the second major Jenner Announcement of 2015.

Why did Kelly Clarkson cancel her wedding?