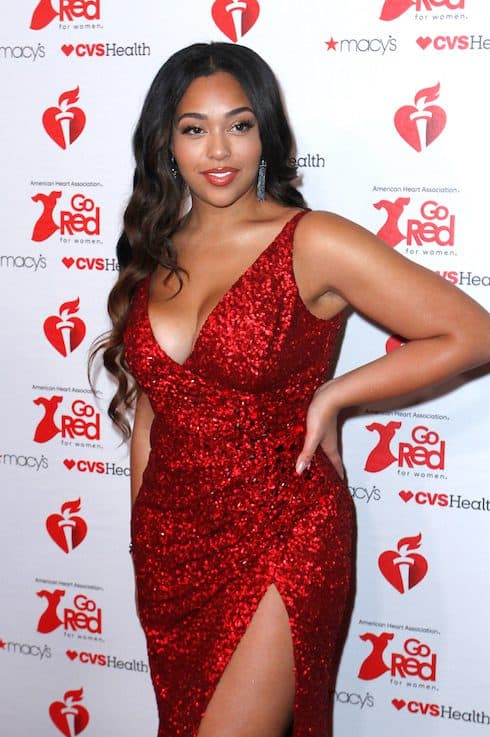 Evidently Tristan Thompson decided to nurse his latest injury via some unconventional methods. Khloe Kardashian’s baby daddy, sidelined from NBA action with a foot issue, hooked up with Kylie Jenner’s BFF Jordyn Woods at a house party over the weekend, but failed to keep things on the DL. (As he’s done a time or two before.) Now, Khloe and Tristan and Kylie and Jordan are going through a split that’s both business and personal — and, of course, very visible.

Kardashian devotées knew Jordyn from her longtime friendship with Kylie, as well as the modeling she’s done for Khloe’s Good American clothing line. Casual observers might have remember her as the person to whom Kylie got fake married in a “stupid” stunt on the series finale of Kylie’s short-lived reality show.

But now she’s known as the last straw for Khloe. According to TMZ, who broke the story, Khloe has officially “thrown in the towel” and broken up with her daughter’s father following his latest cheating allegations. Per their report, Tristan spent Saturday with Khloe and True; the next night, he was at a house party and “snuggled up with” Woods. Their sources claim Jordyn Woods and Tristan Thompson “were all over each other.”

Khloe and Tristan had been rumored to be talking about getting married not long ago, and were said to be planning another baby together as recently as this month. But it seems there’s no chance for reconciliation this time. People’s report, which followed quickly on TMZ’s heels, quoted an anonymous insider who said the Kardashians were “blindsided” and added, as one might expect, that “the whole family is furious.”

And the Kardashins are “particularly upset” with Woods, which is actually a backhanded way of saying they pretty much expected this from Tristan sooner or later. Ever since Khloe took him back, her unspoken message to Tristan has been that she won’t stand to be made a fool. Of course, most observers are going to say that she’s now been made a fool at least twice, by both Lamar Odom and now Tristan. And really, if you’re counting that way, you should count Tristan twice.

But it’s also worth remembering that cheating allegedly brought Khloe and Tristan together in the first place. The timeline is somewhat wonky, but Tristan was said to still be with his first baby mama Jordan Craig when he and Khloe started hooking up. Maybe he just has a thing for women named Jordan / Jordyn? Regardless of the reason, it’s now going to be extremely interesting to see if Khloe really is pregnant with baby #2.

Is Kylie Jenner quitting Keeping Up With The Kardashians?