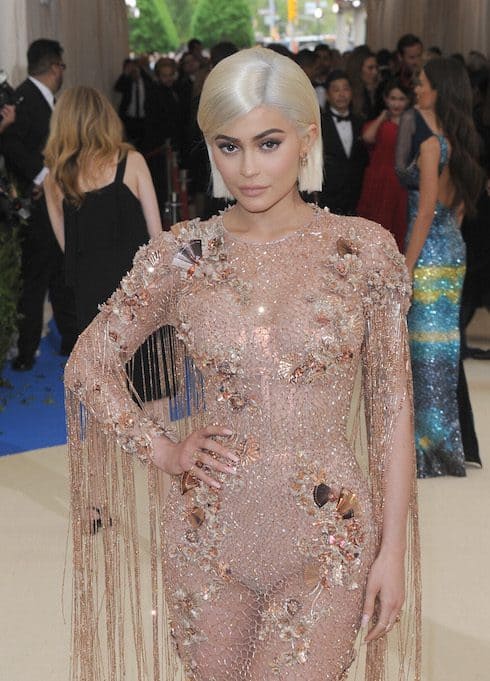 In case you hadn’t heard, Kim Kardashian’s still-anonymous surrogate gave birth to Kim and Kanye’s third child on Monday. Yesterday, Kim shared the news — and the internet was quickly awash with stories about how Kylie Jenner, long-rumored to be the surrogate, could finally come out of hiding. So of course, almost as if on cue, a couple of alleged photos of Kylie Jenner’s baby bump have found their way online.

As with most gossip, it’s the details that make this story. Kylie, who was said to be in labor over the weekend before the Kardashians got a couple of high-profile tabloids to call it a false alarm, apparently allowed herself to be photographed in public for the first time in months while shopping for lotion and Tums at a CVS in Beverly Hills. As of this writing, Seventeen appears to be the only outlet to actually publish the photos of Kylie Jenner’s baby bump, which were snapped by an eagle-eyed (and ninja-reflexed) fellow shopper:

Seventeen’s article doesn’t say when the photos were snapped, but that Kylie Jenner’s baby bump was spotted in a CVS near Cedars-Sinai Hospital — which has indeed been the site of almost every Kardashian birth over the past few years. And, according to Google Maps, there is indeed a CVS near Cedars-Sinai Hospital — the closest one is a scant .4 miles away, just down Beverly Boulevard. (Or, if you’re feeling ambitious, the next-closest is an even half-mile away, on West 3rd.)

Cedars-Sinai is also where Kylie is said to be preparing to give birth and prepping her list of diva-tastic delivery room demands. But honestly, the overplump lips and rumpled face of the person in the photo bring to mind Kris Jenner more than they do Kylie. (Though the woman does look like someone still getting over a bad breakup.) It could likewise be any of the Kylie Jenner lookalikes that Tyga has been linked with since Kylie dumped him. They keep Instagram lively:

If the above photos of Kylie Jenner’s baby bump are genuine, they blow a hole in the the still-popular theory that Kylie actually gave birth months ago and has been hanging out at home ever since. So really all this means is we have another ridiculous bit of pregnancy gossip to savor. Hopefully the absurdity will continue and intensify right up until Kylie’s alleged March due date.