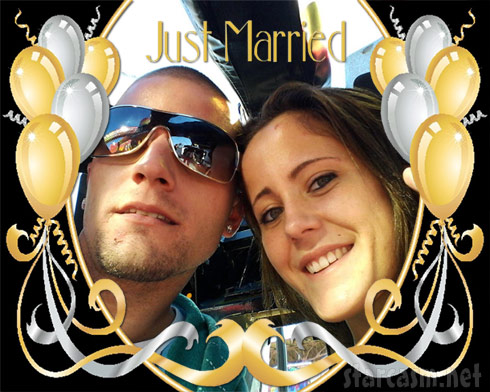 First comes baby in a baby carriage, then comes love, then, ummm… something like that.

Teen Mom 2 star Jenelle Evans is married! The 20-year-old reality star reportedly tied the knot with her fiance Courtland Rogers on Tuesday in a courthouse ceremony.

Jenelle’s sister Ashleigh Evans Wilson spilled the beans to Radar Online stating, “My sister got married this morning, it was a shotgun courthouse wedding.”

I’m not sure if Ashleigh fully understand what a “shotgun wedding” is, but it usually involves the bride-to-be being pregnant, something Jenelle has denied many times over the last couple weeks.

Jenelle hinted something might be up when she posted on her Facebook wall earlier today, “Omg this should be very interesting… :D”

UDPATE – We just spoke with Jenelle who confirms she is indeed married and expects to have a wedding later next year! OMG Can you imagine what that’s gonna be like? I’m sure we will get to see it all go down on MTV.

Radar Online also has a copy of Jenelle and Courtland’s marriage license confirming the two got married today, December 4, 2012.

The nuptials come just a couple months after the two started officially dating in October, and as you might imagine, the news came as quite a shock to Jenelle’s mom Barbara Evans. “My mother was totally shocked and had to hear it from someone else,” Ashleigh says. “Our whole family is shocked because they have not been dating very long. I’m sure she did this to distract from all the drug accusations that have been flying around and of course she thinks it will help her get custody of Jace back from mom if she is married.”

In case you didn’t know, in addition to Jenelle having her three-year-old son Jace, Courtland has a one-year-old daughter named Jordan, so I wonder if he’s thinking the same thing.

I don’t think being married (especially to someone with an extensive criminal past involving multiple drug arrests) will help at all with any sort of custody dispute, but congratulations to Courtland and Jenelle… Rogers? Am I really not going to be typing “Jenelle Evans” any more?!? Wow.

So what did the happy couple do to celebrate their big day? Courtland took Jenelle to her favorite place in the world! Olive Garden! She shared this photo on Facebook along with the caption, “Courtland took me out to Olive Garden and asked the waiter to take the pic, lmao. Don’t ask about my eyes… Weird” 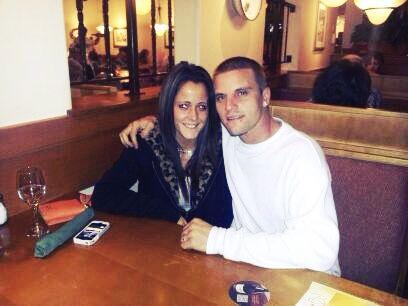 That does look like a wedding ring on Courtland’s finger!

On a side note, Jenelle recently posted on Sulia that she and Courtland were planning on taking a cruise together for the holidays, saying at the time it was to celebrate their birthdays (Jenelle’s is in December and Courtland’s is in January), but now I’m starting to wonder if it wasn’t supposed to be a honeymoon cruise all along!

UPDATE – Perhaps the “shotgun wedding” reference was accurate after all, or at least Jenelle’s ex Gary Head thinks so. After the announcement was made Gary tweeted, “Jenelle got married and she’s pregnate agian. I can understand the marriage but you got her knocked up to!!! Your F***ED bro #LifeMistake”

But he didn’t stop there! Gary then threw yet another monkey wrench into the seemingly infinitely complicated world of Jenelle Evans by insinuating she may have gotten pregnant in order to get more money from MTV! “Wish MTV would pay me 20K to have a kid by Dec. 31 #JustSaying” Wow, so not only is he claiming Jenelle and Courtland are having a child, but that there was a deadline they were working under? As far-fetched as it sounds, it would explain Jenelle’s mysterious “there’s a big reason we got engaged so fast” remarks during her infamous Ustream live chat.

MTV has taken a lot of heat from airing the Teen Mom and 16 and Pregnant shows, but I’m in agreement with a lot of experts that it has been an overall positive influence on America’s sexually active youth. But, if it turns out they had some sort of automatic payout for a pregnancy, that will change my opinion of the network for sure! (Although it will not change the positive impact of the show.)

On the other hand, this is a tweet from one of Jenelle’s ex – that has about as much value as used paper towel.

UPDATE – (What’s a Jenelle Rogers post without six or seven updates, right?) Shortly before getting married, Courtland was formally charged with a felony! At the very same courthouse he and Jenelle were married in! Wh-wh-what?!? Just click the link.