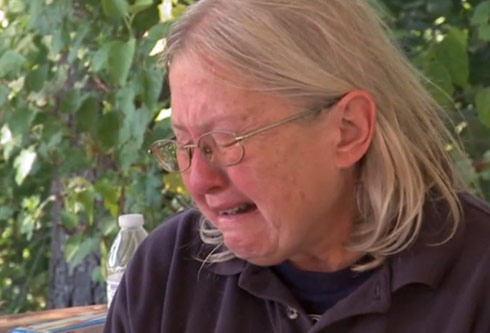 Hoarders is renowned for its ability to shock viewers with its look into the tragic lives of those who suffer terribly from the sickness of hoarding. Every once in a while they’ll feature an episode that has me thinking, “They’ll never manage to out-disturb me with any episode again.” Then, they unleashed the living nightmare that is Terry the cashier’s reality last night.

I was unable to turn away but I figured I’d provide this as sort of a reality PSA. If you’re flipping around and you come across the episode of Hoarders featuring Terry the cat lady (seen above) – TURN THE CHANNEL IMMEDIATELY.

Before I continue I want to give two notices. Number one is that just about everything I’m about to summarize is hard to imagine and brutish, so if you’re faint of heart I don’t want to ruin your lunch… for the week. Number two is that I decided not to include any of the graphic video or images because, well, I just ain’t!

Terry is a cat lady, she takes in strays and when she was first asked approximately how many she believed she had, she estimated somewhere in the neighborhood of 50. The catch here is that Terry was thinking only of the cats that were still living, she did not take into account the dead ones, for whose count was well over 100.

The floors of her home and walls were covered with excrement and when I say covered they were using shovels to clean it out. Her refrigerator and freezer were stuffed with feline carcasses (and other small critters such as squirrels and roadkill) because this very ill woman had intended to have them all cremated. The appliance turned out to be unsuited for this task and during the cleanup, which required the crew to don full Hazmat style uniforms, at least one of the cats was discovered to have been liquified in a plastic storage bag.

At one point Terry is shown taking a deceased cat from the freezer, petting it and holding it, overcome with sorrow.

Horrible. It was Terry’s son who had enough and set forth the ultimatum that the overhaul of her home take place or he was going to inform the authorities. Here is a deleted scene featuring her son but none of the horrors I regretfully can’t forget:

In the end, only 18 of the 49 cats that were still alive in the home were healthy enough to be saved. Through anguish Terry promised that her hoarding of animal days was over. She was warned that if it happened again, the Humane Society and animal control would pursue charges.

At an attempt at beginning anew, one room of her home was completely revamped and safe for living, and for closure, she was presented with an urn of cat ashes. The show’s counselor felt it would be best for her therapeutically to let the ashes go and Terry reluctantly did.