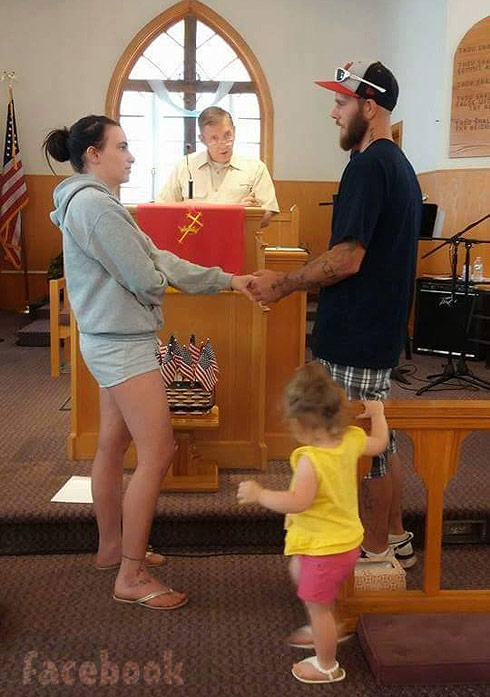 Last week we shared some very disturbing news as Gypsy Sisters star Mellie Stanley’s significant other Skott Vuncannon (real name Randall Scott Vuncannon) was charged after allegedly killing her puppy by throwing it against a wall during an argument. In the police report it revealed that Mellie and Skott are husband and wife, which surprised many fans because Mellie had previously adamantly denied that they were married. Some questioned the accuracy of the police reports, but those doubts were smashed when a video of Mellie and Skott’s wedding ceremony surfaced on Facebook.

The clip does not include the actual vows, but does feature Mellie and Skott in front of a preacher, who lectures them on how to make a marriage work:

The ceremony was quite different from Mellie’s previous wedding to Robbie York in which she famously wore Sondra Celli’s waaaaaay-over-the-top pink and leopard print wedding dress, complete with crown and wand.

Mellie and Skott reportedly got married in late May and hoped to keep the nuptials a secret. There are conflicting reports as to their current relationship status. Mellie has stated she has filed for divorce, but numerous witnesses claim to have seen the two casually hanging out together since Skott was released from jail.

This is Mellie’s fourth time tying the knot — click here to read about her previous marriages.