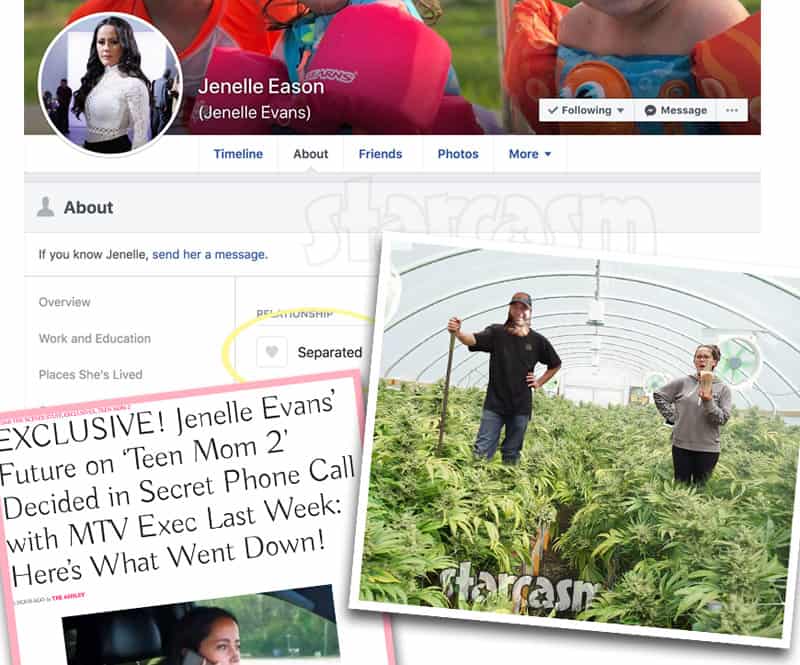 This week’s episode of Teen Mom 2 included Jenelle and David Eason’s marital problems from earlier this year, and it seems the footage might have opened some old wounds as the two homesteaders have once again gone through the motions of a social media break up. In addition to unfollowing each other on Instagram, Jenelle has changed her Facebook status to “separated” and has been sharing numerous “woe is me” type posts.

DID DAVID AND JENELLE BREAK UP?

During the airing of the episode Monday night, Jenelle updated her Facebook status to “feeling sad.” She then shared a text graphic that reads: “Better days are coming.”

Today, she shared the Mark Anthony quote “She is rare because she is real” before posting a gif of Squidward rolling himself up in a bed sheet and then rolling under the bed. “How I’m feeling right now…” was the caption.

Her most recent post was another text graphic with the following statement:

David hasn’t really hinted at a split publicly as he continues to troll Jenelle’s co-stars, post pro-gun memes, and share revelations about how democrats are selling out poor black people in favor of illegal aliens.

So, are Jenelle and David really broken up — or at least having serious issues? Who knows? Normally I might suggest waiting until it all airs on MTV, but judging from the way things are going with MTV not being able to film Jenelle at all, viewers may only see a typed description with a screen cap of Jenelle’s Facebook relationship status.

UPDATE – While writing this post, Jenelle shared a couple more updates on Facebook. She downgraded her status from “feeling sad” to “feeling devastated.” She also shared two audio clips from the intro to Ariana Grande’s song “In Your Head.” The intro is a recording of Ariana’s tour director and close friend Doug Middlebrook as he seems to console Ariana after a break up. Here’s the full quote:

Here’s the thing: you’re in love with a version of a person that you’ve created in your head, that you are trying to but cannot fix. Uh, the only thing you can fix is yourself. I love you, this has gone on way too long. Enough is enough. I’m two blocks away. I’m coming over.

And here is an excerpt from the lyrics to the song:

Painted a picture, I thought I knew you well
I got a habit of seeing what isn’t there
Caught in the moment, tangled up in your sheets
When you broke my heart, I said you only wanted half of me

My imagination’s too creative
They see demon, I see angel (angel) angel
Without a halo, wingless angel

Speaking of “the way things are going with MTV not being able to film Jenelle at all,” MTV execs reportedly spoke to Jenelle this week about her future on the show. According to The Ashley’s Reality Roundup, Teen Mom 2 producers have been under the assumption for a while that Jenelle was going to be fired. There was a call set up between Jenelle and Benjamin Hurvitz, the Vice President of Current and Development for MTV Networks, and it was assumed that the reality star was getting the boot.

“Because she was talking to him, everyone behind the scenes was positive that Jenelle was being fired on Friday,” The Ashley’s source says. “That’s what been circulating among the show’s higher and lower producers for weeks, ever since the Reunion.”

However, Benjamin revealed to Jenelle that she was not fired as they discussed potential solutions to working around David as far as filming goes.

The news that Jenelle would remain on the show (without actually appearing on the show it seems) will most certainly not sit well with a lot of fans, and those fans are not alone. “When the crew and producers found out Jenelle was not let go, they were very upset and disappointed,” the source adds. “Everyone finally thought they were rid of Jenelle and David and all their chaos for good.”

The Ashley also reports that Jenelle and Benjamin were joined by others on the call, including her mom Barbara and more folks from MTV. The latter addressed Jenelle’s anger over being ambushed at the Reunion by co-host Nessa over her and David’s comments about Nessa’s boyfriend Colin Kaepernick. “The people on the call actually apologized to Jenelle for what happened to her at the Reunion with Nessa!” a source tells The Ashley. “They promised Jenelle that nothing like that would happen again, and said they were sorry that Nessa had that planned.”

It’s unclear what producers have worked out as far as filming Jenelle for Season 9B, especially considering the fact that they haven’t filmed at all yet, unlike the other moms. It is possible that whatever deal was put on the table did not sit well with David, and that is what caused the most recent issues between the two. That is purely speculation on my part, however, and is not coming from The Ashley or her sources.

Regardless, The Ashley reveals that MTV has a secret plan if they wind up not filming Jenelle! “The Ashley is not revealing what that plan is,” she teases, “but she will at a later time when she can get all the details!” 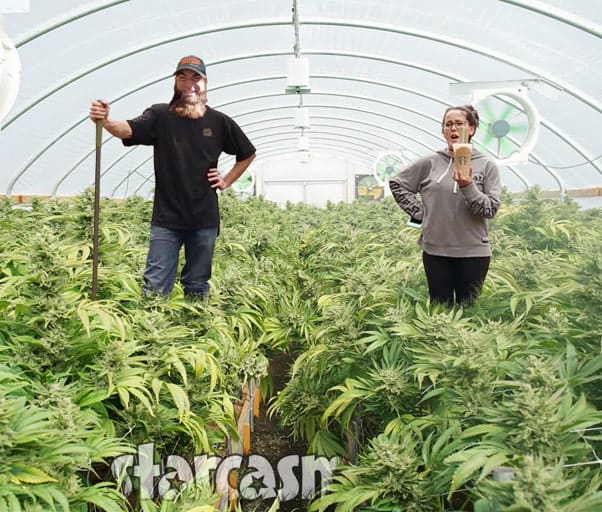 ARE DAVID AND JENELLE GROWING MARIJUANA ON THE LAND?

A new blind item from Enty Lawyer on Crazy Days & Nights has many people thinking the self-described homesteaders might be trying to start their own illegal herb garden. “The three worded nickname of the former cable reality star has been bragging that he has a pot grow,” Enty begins an entry posted on Monday. “He has started thinking of himself as a drug kingpin and has been buying more guns and trying to get his friends to be enforcers, but there is nothing to enforce. He hasn’t even had a harvest yet.”

David is a “former cable reality star” who is commonly referred to as UBT, or Uncle Bad Touch. That combined with the mention of “buying more guns” had many readers speculating that the blind item is in reference to the Easons.

There have been rumblings of Jenelle and David attempting to grow pot on The Land for a while now, but nothing has been confirmed. And let’s not forget their impromptu Confederate flag waving cross-country trip from California to North Carolina last summer! Jenelle said they made the road trip because she can’t fly any more due to esophageal spasms, but a lot of folks were suspicious that there might have been some other reason. I’m sure the new blind item will have fans wondering if perhaps the couple was transporting weed seed! (Or seedlings? I don’t know how that works.)

I know I shouldn’t allow myself to be surprised by anything David does, but if he and Jenelle really are trying to grow marijuana on The Land I would be shocked! These are two of the most highly scrutinized celebrities (yes, they are celebrities y’all) on the planet under some of the most intense media and social media spotlights around. The Land was visited by The Secret Service for goodness sake! So, to actually consider doing something illegal like growing weed there would be astronomically stupid — even for these two.

I should note that I don’t normally run with blind items in posts, but Enty Lawyer does have a rather amazing track record. Plus, I REALLY wanted to create that Jenelle and David pot farm photo!

So, what can we expect for the rest of this season of Teen Mom 2 as far as Jenelle goes? According to The Ashley, MTV doesn’t really have much more footage of her, and her sources say that we will be getting a second episode without Jenelle at all. That pretty much lines up with our prediction:

You can catch Kail, Chelsea and Leah when new episodes of Teen Mom 2 air Monday nights at 9/8c on MTV!