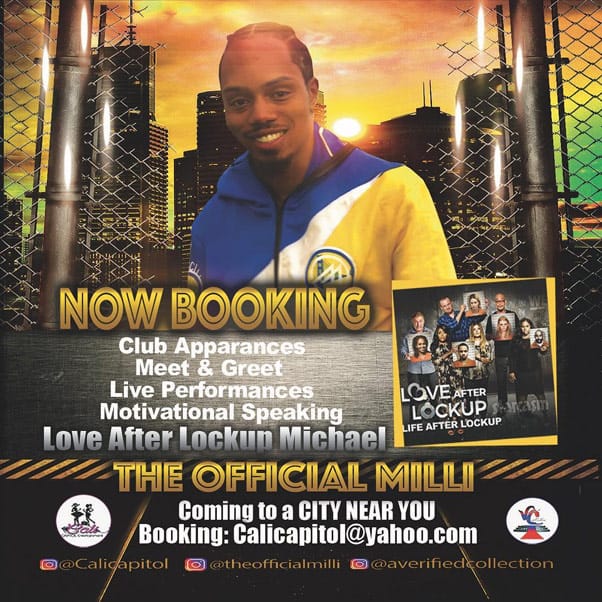 It was recently announced that Love After Lockup Lothario Michael Simmons would be joining his prison sister wives Megan and Sarah for WE tv’s new spin-off series Life After Lockup, and apparently part of his “life after lockup” will include going on a national tour!

Michael signed Cali Capitol as his manager earlier this month, and Cali quickly announced that anyone interested in booking Michael could contact her. “It is my honor to announce yours truly is now the manager for @theofficialmilli_,” she wrote on Instagram on April 10. “✍? We are super excited for the journey ahead,” she added, before revealing that booking information could be found in a link in her bio. The caption concluded with this string of hash tags: #loveafterlockup #wetv #reality #myclient #hismanager #bookings #radio #clubapperances #publicfigure #wegotyou #weworking #positivevibes #bosslady #averifiedcollection

Cali caught a flight from her home in California and traveled to Flint, Michigan where she has been working side-by-side with Michael on some promotional photo shoots and some other hush-hush stuff. She’s documenting some of the process on Instagram and Facebook via photos, videos, and live streams.

“Coming to a City Near You!!” Cali captioned the image. “Drop your City tag a club or promoter in your City…We will see you all soon ??”

Michael posted a text graphic on Instagram at roughly the same time that the poster was shared asking his followers to let Cali know where they live: “I WANT TO START DOING MEET & GREETS, BUT IDK WHERE TO GO FIRST,” the graphic reads. “GO TO MY MANAGER PAGE (@CALICAPITOL) & SPAM HER ACCONT [sic] WITH WHERE YALL LIVE.”

I checked on Sarah and Megan, and it doesn’t appear as though either of them have commented on social media about Michael going on tour.

So how much would you pay to meet and greet with Michael and hear his motivational speaking? Perhaps he and Cali should hit up some of his co-stars and make it a package deal? ?