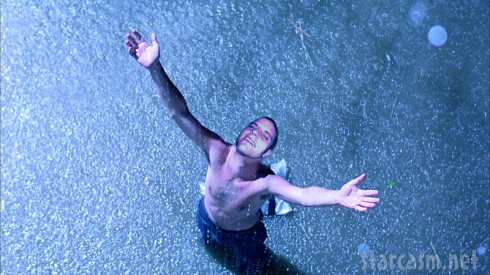 As we reported this weekend, Jenelle Evans’ estranged husband Courtland Rogers found himself back in Brunswick County Jail after being arrested Sunday and charged with felony larceny and other counts. But earlier today Courtland became a free man again — if just for a while — after posting his bond.

Of course the first place Courtland went after getting out was Twitter, where he wrote, “Out on bail fresh out of jail now I’m Jaja searching ;)” (Jaja is his young daughter Jordan.)

As you might expect, Courtland’s announcement was met with a bit of negativity, including a tweet from a follower named Cheyenne who wrote, “get your f**king act together. You act proud of your horrible achievements. That isn’t sh*t id be broadcasting…..”

To which Courtland responded with the tweet, “first off my life is public due to my wife second off I am proud of myself for actually putting 6,000$ aside to bond out buddy.” He then added, “and another thing if u don’t like my broadcasting…. SUE ME” and “ur a dumb ass b*tch I have had one hell of a life due to my own decisions and I’m ready to live so LET ME.”

He then posted a photo of himself and his daughter with a message for the haters:

This is what has my attention right now so all u haters look deep in2 this picture an know in ur heart I can do this pic.twitter.com/3VRLaneY8K

According to online records, Courtland has three upcoming court appearances — though I assume at some point they will be consolidated. Here are the court dates and charges:

* My apologies to diehard Shawshank Redemption fans for the blasphemous Photoshopegery, but I couldn’t resist.

Teen Mom’s Jo Rivera releases single “Life of a Teen Father Too” as N.I.C.K. b