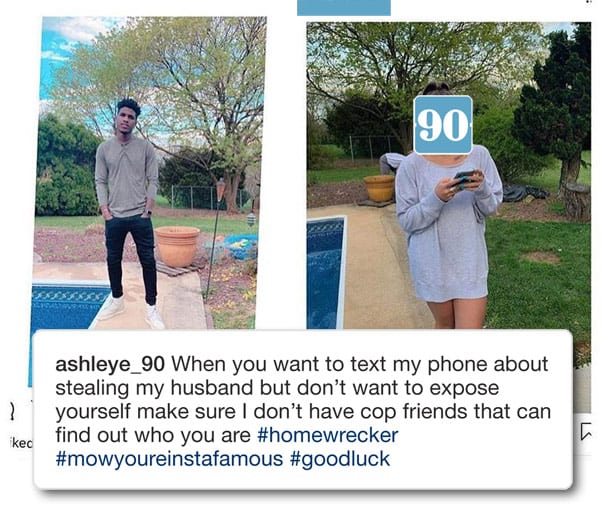 The non-stop drama continues between 90 Day Fiance: Happily Ever After couple Ashley Martson and Jay Smith. Right around the same time as the Season 4 Premiere of the show Sunday night, Ashley took to Instagram to share separate photos of Jay and another woman standing by the same pool. She hash tagged the images with #homewrecker and went off on the other woman.

“When you want to text my phone about stealing my husband but don’t want to expose yourself, make sure I don’t have cop friends that can find out who you are,” Ashley boasted. In addition to #homewrecker, Ashley also added the hash tags #nowyoureinstafamous and #goodluck.

She quickly deleted the images, but not before they were disseminated by the 90 Day Fianceverse — including John Yates, who re-posted the images late last night. (Click that link to see the woman’s face. I opted to censor it out for now.)

There was an In Touch article about Ashley’s post, and Ashley shared a sponsored link to it in her Instagram bio while teasing: “It’s time for me to OUT THE WOMAN who Is with JAY. #LinkInBio #Boom #Homewrecker #Exposed ✌️?”

The In Touch article (eventually) includes a quote from a “source” that tells them “the other woman and Jay have actually been together for ‘months.’” They reportedly reached out to Jay for comment, but he has not responded. There have also been reports circulating that Jay has gotten another woman pregnant, complete with alleged text messages and a sonogram. I assume if that were the case, and this was the woman, then Ashley would have referenced that in her caption.

Meanwhile, Ashley has been embracing her newfound (yet again) single status by partying it up in New York City! Late last week she attended the Mask Skincare launch party along with other reality show celebs like former Teen Mom OG star Farrah Abraham and The Real Housewives of New Jersey‘s Teresa Giudice:

Thank you @maskskincarecom and @sarahmirsini @darek_michael for having me at your amazing launch in NYC! Cannot wait to try out MASK!! #feelingbeautiful #amazing #nyc #hempgarden A special thanks to my PR team for posting this amazing photo of me looking like a deer in headlights @jdonovanpr ?

Ashley followed up that event by celebrating her birthday at the Playboy Club. Once gain, Farrah Abraham was in attendance, as was new Teen Mom OG dad Cory Wharton:

Best Birthday ever!!! Thank you @theprista @playboyclubnyc for hosting me tonight xoxo ? #nyc #birthday ? Cake by @isabellascreations My actual birthday is May 2 I’m just celebrating all weekend ? Thanks for the birthday wishes!

Had a great night last night. So ready to have another good night. I’m not dating anyone in these photos so don’t listen to the fake news ?#birthday

In addition to Cory and Farrah, there was also a Bono look-alike at the party — probably the same one that partied with Ashley’s Happily Ever After co-star Paola Mayfield at a Maxim party in Minnesota last year. Unfortunately, Ashley seemed to think it was actually the U2 frontman. Here are some of her interactions from the comments:

ASHLEY: Same place, same time. It was exciting! Made my night!

COMMENT: I’m not sure in what world this is Bono.

ASHLEY: I’m dead with these people!

COMMENT: I’m from Ireland and have passed him in the street. This is definitely not Bono

ASHLEY: Well if wasn’t him this quack pays a lot of money to be completely surrounded by security so no one can get near him.

Oh, and if you’re thinking Ashley looks a little thinner, you would apparently be right. (Not counting her breasts, which have grown considerably.) A commenter asked Ashley if she had lost weight and she responded by revealing: “Yeah, almost 20 lbs.” When asked how, Ashley simply wrote “Stress.”

If you keep up with Jay and Ashley on social media, then you might be aware that Jay was also in New York City this weekend. When asked about that, Ashley explained that they were scheduled to be at an event together for the show.

Jay took to Instagram to show that Ashley isn’t the only one living wild and free in The big Apple!

In case you missed it, The Department of Homeland Security issued a warrant for Jay’s arrest earlier this year, and he has a court date scheduled next month. He will appear before an immigration judge in Philadelphia, and seems to be at serious risk of being deported.

You can keep up with all of Jay and Ashley’s over-the-top relationship drama with new episodes of 90 Day Fiance: Happily Ever After airing Sunday nights at 8/7c on TLC. And then you can catch other 90 Day Fiance cast members commenting on the episode on the brand new series Pillow Talk, airing Monday nights at 10/9c.