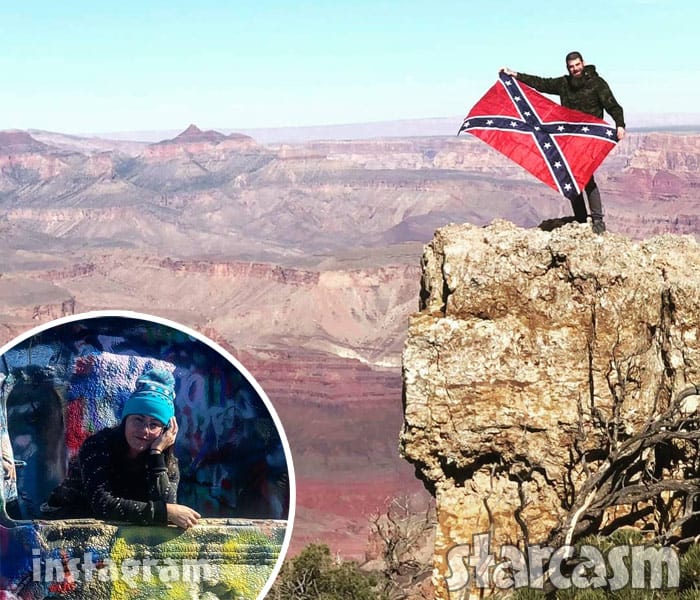 Teen Mom 2 star Jenelle Eason is no stranger to sparking the imaginations of conspiracy theorists, thanks in large part to her adamant denials about some things in the past (pregnancies, break ups, drug use, etc.) that later turned out to be true. Once again, the controversial reality star is sparking speculation from the collective hatter imagination due to her mysterious, and apparently unplanned, cross-country road trip after she and her husband David flew out to California more than a week ago.

The exact timing of the couple’s arrival in California is unclear, but they were definitely there on November 9 when Jenelle had her makeup done and posed for some professional photos that look to be for her cosmetics line. Soon after that, the couple’s impromptu cross-country trip began.

On November 11, Jenelle posed for numerous photos at Sequoia National Park in California. That may have just been a day trip and hike, however, because it was three days later before she and David arrived at the Grand Canyon — which is less than ten hours from Sequoia National Park.

While at the Grand Canyon, David made it a point to pose with his precious Confederate battle flag, which the internet was happy to alter:

After the Grand Canyon, Jenelle and David’s journey took them to Cadillac Ranch in north Texas, as well as another stop in Nashville, Tennessee. It appears that the couple was back home on The Land by November 17.

Here are some of the ingredients that composed the highly combustible fuel for the rumor mills:

• Jenelle and David flew to California with the intent of flying back, but wound up driving instead. (Jenelle later confirmed this.)

• The Hollywood Gossip reports that there is a Crazy Days and Nights “blind item about a reality star making the trip to California to procure special designer drugs. According to Crazy Days and Nights and several other websites, the proposed drug deal went awry when the reality star’s significant other threatened to get violent with the dealers.” (I was unjable to find the specific blind item, but they are notoriously hard to track down.)

• A little over six months ago, Jenelle left a scathing review for a doctor who is part of the New Hanover Medical Group in Jenelle’s area of North Carolina. Jenelle states in the review that she missed an appointment, and as a result she says “I received a letter from the ENTIRE NHMG that says I cannot go to any of their doctors and they terminated me. This means now almost 20 doctors around my area I cannot see for primary or specialist reasons because Dr. ****** terminated me from his office.” Hatters were quick to suggest that perhaps Jenelle had been blacklisted for doctor shopping or otherwise abusing her prescriptions — which is purely speculation, but not a hard concept to sell.

Jenelle would eventually explain everything, but her explanation was odd enough to do very little to put out the rumor flames. Here is all that she said over a series of text-only Instagram story posts:

It really sucks when you have so many opportunities at your feet but your health holds you back. 🙁

Might not be able to fly for the rest of my life, seriously heartbroken.

There’s so much more in life for me to see. I don’t want to stop here. ?

QUESTION: Why might you not be able to fly ever again? 🙁

Esophageal Spasms 🙁 No one knows why it happens.

QUESTION: What was your emergency trip for? Health reasons? Hope you are alright, i know some people will hat…

It wasn’t “an emergency trip” at all. I went to take a photoshoot for business. Got sick on the way to Cali so I drove home. ??‍♀️ 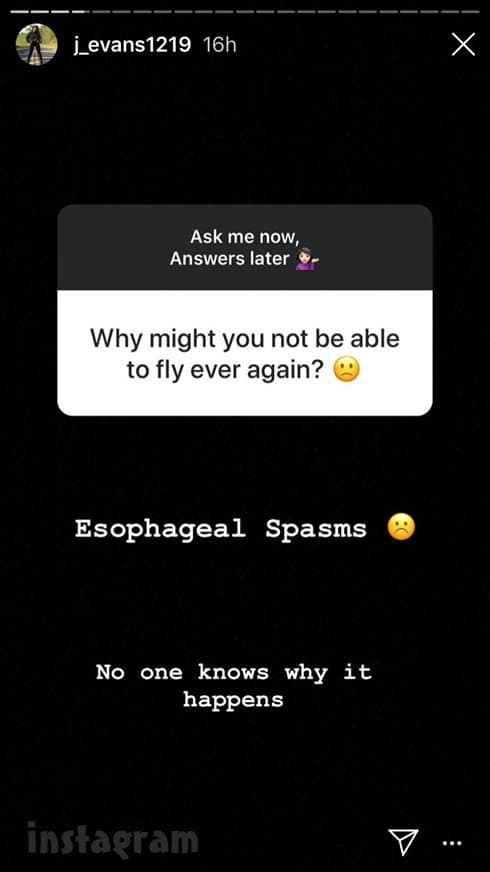 I Googled esophageal spasms and any indication that having them might prevent someone from being able to fly, but I could find no solid connection online. That being said, they do sound like they can be VERY bad, essentially mimicking the symptoms of a heart attack — so clearly that isn’t something you would want to go through, or put airline staff through, while on a flight.

I should also point out that Jenelle and David are homeschooling his oldest daughter Maryssa. It’s unclear who handled those duties — as well as the parental duties for Kaiser and Ensley, while the couple was on their more-than-a-week trip.

Just in case you’re not quite sure exactly what the imaginations of the hatters are coming up with, here is one example from reddit that really doesn’t have to get very creative to offer an alternative narrative:

I honestly have no idea what to think — the whole thing is a bit looney no matter what. I guess we will all just have to wait until The Ashley unstraps herself from the bottom of David and Jenelle’s rental car and gets to a computer before we know anything for sure! 🙂

While we wait, here are some photos from Jenelle and David’s road trip:

This is the most magical place I’ve ever been in my life! I’m so glad to have experienced it with my best friend. This makes you wonder if giants were ever real… ? Nature is super breathtaking. Don’t ever take it for granted. Adventure out everywhere you can and explore the world! ?? #BuildingMemories #BucketList

Just planting my flag in all 50 states! #merica #rebel

Ever been to the #CadillacRanch ? ???