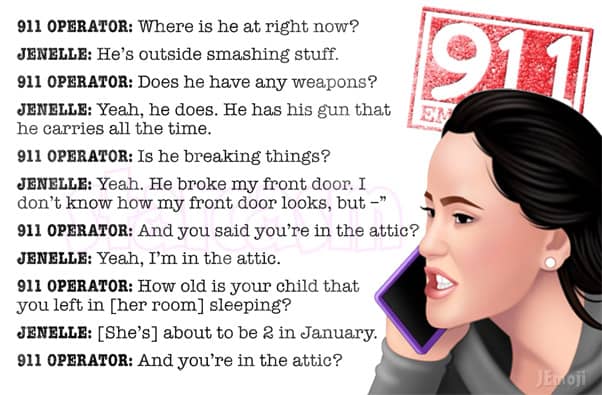 The media spotlight continues to shine on the darkness of life on The Land. Yet another 911 call placed by former Teen Mom 2 star Jenelle Eason was released today, which she made while hiding in her attic as David was “outside freaking out.” Jenelle told the operator that David was in possession of a firearm and that he was “smashing our front door trying to get inside.” Meanwhile, the operator seemed justifiably concerned over the fact that Jenelle left Ensley asleep in her room throughout the ordeal!

The 911 call was placed by Jenelle two days before Christmas on December 23, 2018. “My husband is freaking out,” Jenelle tells the operator. “He is outside freaking out because he thought I took his phone,” she adds before being cut off after saying she has a she shed twice.

The operator then gets Jenelle’s information

Here is most all of the conversation transcribed:

JENELLE: He’s smashing our front door right now trying to get inside. I’m upstairs in my attic. My daughter’s in her bedroom sleeping. He said I locked him out and took his phone. He was outside looking for his phone after he got upset [at] an article that was f***ing –”

911 OPERATOR: Does he have any weapons?

JENELLE: Yeah, he does. He has his gun that he carries all the time.

911 OPERATOR: Is he breaking things?

911 OPERATOR: And you said you’re in the attic?

JENELLE: Yeah, I’m in the attic.

911 OPERATOR: How old is your child that you left in there sleeping?

JENELLE: [She’s] about to be two in January.

JENELLE: Well, I’m right above her room right now. She’s sleeping, I don’t want her to wake up right now.

911 OPERATOR: OK, but nobody’s down there watching them?

JENELLE: No, I’m right here at the steps, at her — like, I’m looking at her door right now from the attic steps.

911 OPERATOR: OK, and you say he possibly has a weapon?

At this point, another dispatcher can be heard in the background revealing that David had called requesting a welfare check on Jenelle because she wouldn’t answer his calls or texts. He also stated that he could tell that Jenelle was on Facebook.

“OK,” Jenelle’s operator responds to the other dispatcher before laughing. “We have a lot of traffic with them,” she adds.

So what article was it that sent David off in a rage? It’s difficult to tell because Christmas was a very busy time on The Land as far as headlines go.

Just a week and a half before Christmas was when the Secret Service sent a representative to The Land after David posted a video rapidly firing a gun and tagging President Donald Trump.

December 21 was a real poop storm on The Land because that is when the video of Jenelle burning Kail Lowry’s Pothead Haircare gift went viral. December 21 was also the day that it was revealed the victim of David’s viral forced towing video was going to press charges. On the same day as the 911 call, Jenelle BLEW UP at WECT news reporter Ben Smart over his part in the charges being filed.

Then again, it could have been something else entirely. There are hundreds of articles written about David and Jenelle every day, and unless it is this one, they are all negative.

There was also a second 911 call from Jenelle released today after she and David recently received a white powdery substance in the mail. You can click on over to The Ashley’s Reality Roundup for a recap of that call, but be forewarned that it involves naked UBT!