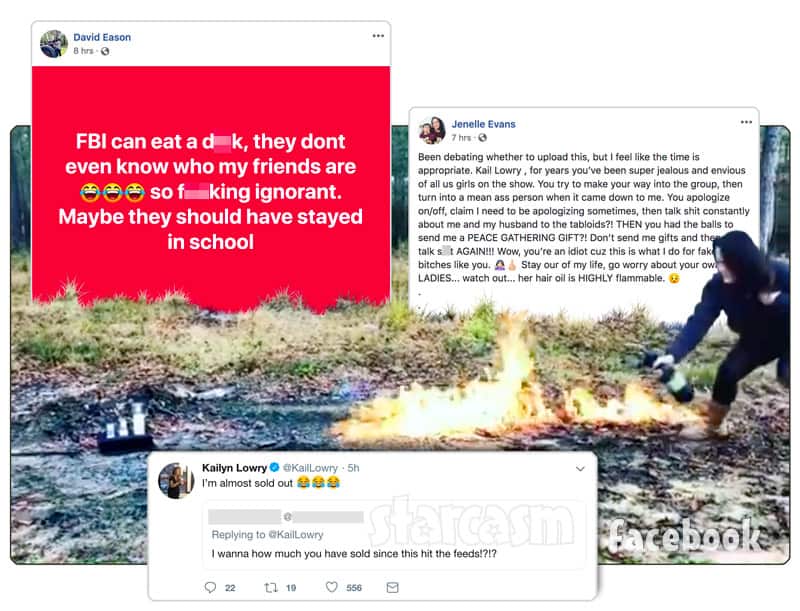 In the latest chapter of Life on The Land, Jenelle Eason sets fire to the Pothead Haircare gift set that her co-star Kail Lowry sent as a peace offering, and David Eason goes off on the F.B.I., C.I.A., and the Secret Service suggesting that they are all idiots and should have stayed in school.

First up, we have Jenelle doing what she normally does when she has anything with marijuana in it — she blazes it up! In case you missed it, Kail recently launched her own line of Pothead Haircare products infused with CBD oil from the marijuana plant. She sent all of the Teen Mom moms from all of the current franchises a gift set, including Jenelle, despite the fact that the two haven’t been on speaking terms for some time.

Although they have not been speaking to each other, Kail and Jenelle have certainly not put a halt on speaking about each other! Kail recently responded to all of David Eason’s antics over the past couple weeks — which included showing off his arsenal of weapons and ammunition after a visit from the Secret Service as well as a YouTube video in which he forcibly towed a stranger’s truck over a parking dispute — by saying on her Coffee Convos podcast that she believes David is “a danger to people” and that “maybe he needs a psych eval.”

That seemed to be the spark that motivated Jenelle to post the Pothead bonfire video, though it is unclear exactly when it was recorded. Jenelle posted the one-minute clip on multiple social media platforms, and in it you can see her pouring gasoline on the haircare gift set, and then in a line to a place where she ignites the gasoline “fuse” with a small torch. Here’s the video:

“Been debating whether to upload this, but I feel like the time is appropriate,” Jenelle began her caption. “Kail Lowry, for years you’ve been super jealous and envious of all us girls on the show. You try to make your way into the group, then turn into a mean ass person when it came down to me. You apologize on/off, claim I need to be apologizing sometimes, then talk sh*t constantly about me and my husband to the tabloids?! THEN you had the balls to send me a PEACE GATHERING GIFT?! Don’t send me gifts and then go talk sh*t AGAIN!!!”

Jenelle continues: “Wow, you’re an idiot cuz this is what I do for gifts sent from fake ass bitches like you. ??‍♀️?? Stay our [sic] of my life, go worry about your own.”

That’s where her Instagram caption ends, but her Facebook caption continues with a cautionary message. “AND LADIES… watch out… her hair oil is HIGHLY flammable. ?” So ladies, DO NOT pour gasoline on your Pothead Haircare products and then try to light it with a torch becasue IT WILL burn!

Jenelle concludes her captions by credited Ryan Upchurch and Travis Tidwell for the music.

In addition to the video, Jenelle also posted this photo of the burning “peace gathering” in her Instagram story: 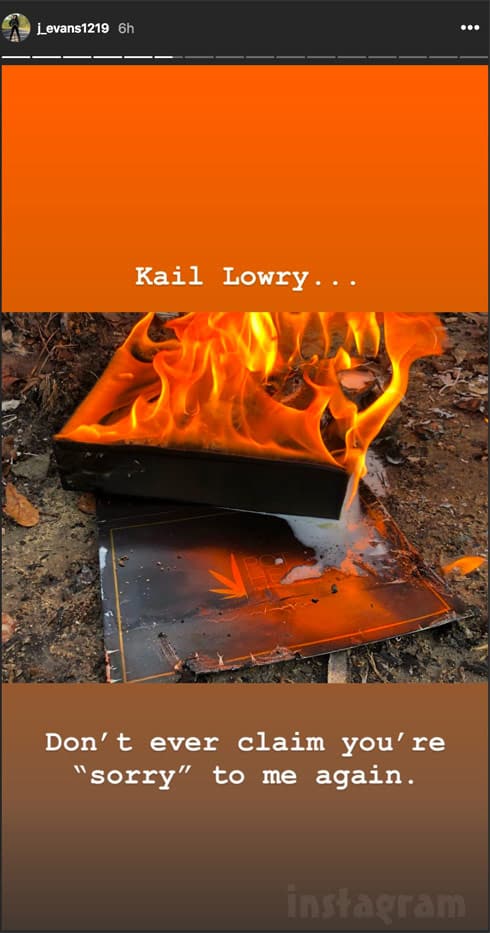 Kail retweeted someone who had shared the photo above and she wrote: “Potheadhaircare.com is ????” She then had some more fun with Jenelle’s fiery protest by announcing a flash sale on her website with the code “lit.”

The angry clip looks to have turned into quite the marketing windfall for Kail. One follower openly wondered how much Kail had sold since the video was posted, and Kail tweeted in response: “I’m almost sold out ???.”

Meanwhile, David Eason continues his battle with every branch of federal, state, and local law enforcement. He angrily called out the F.B.I., C.I.A., the Secret Service, and “THE GOVERNMENT” as a whole in a series of angry posts after the F.B.I. reportedly interviewed Jenelle’s brother Colin. Here are all of David’s Facebook posts:

FBI, CIA, Secret Service, THE GOVERNMENT, all really suck at their jobs, especially if they think I have something to hide!

How f**king stupid are u FBI, u go to Jenelles brothers house, harass him and take him to the hospital bc you think were friends?

FBI can eat a d?ck, they dont even know who my friends are ??? so f**king ignorant. Maybe they should have stayed in school

If ur a “professional” do ur due diligence, dont take advice from the wrong places. Dont be an idiot your supposed to be the best

And that closes this chapter of Life on The Land. Stay tuned!